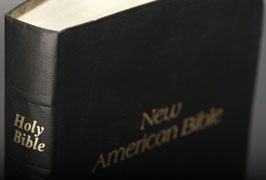 A dispute between the U.S. Conference of Catholic Bishops and the Catholic Biblical Association of America over translation royalties has drawn new attention to the New American Bible.

The first completely revised edition of the New American Bible since 1970 is due to be published within the next year or so.

The New American Bible was the first major English translation of the Bible under Catholic auspices since the mid-18th century, when English Catholic Bishop Richard Challoner updated the 16th-17th century Douay-Rheims Catholic version of the Bible in English.

Here is a brief chronology of the New American Bible’s development:

1941: Under the leadership of the National Center of the Confraternity of Christian Doctrine, members of the Catholic Biblical Association complete a revision of Challoner’s version of the Rheims New Testament. It is called the New Testament, Confraternity Edition. It adheres closely to the Vulgate, the Latin translation of the Greek and Hebrew version of the scriptures that St. Jerome had carried out in the late fourth century.

1943: Pope Pius XII issues Divino Afflante Spiritu (“Inspired by the Divine Spirit”), an encyclical on scripture studies that dramatically changes Catholic standards of scripture scholarship and encourages scholars to go back to original sources in their Bible studies and their translations of scripture into modern languages.

1970: The first complete version of the New American Bible is published. It consists of new translations of Old Testament done from the Greek and Hebrew between 1952 and 1970.

1986: A revised New Testament, using a limited principle of inclusive language -- horizontal inclusivity, or avoidance of male language in references to groups of people that may include women -- is completed and approved. It is published the following year.

1990: U.S. bishops overwhelmingly approve “Criteria for the Evaluation of Inclusive Language Translations of Scriptural Texts Proposed for Liturgical Use.”

1992: Vatican confirms for liturgical use in United States the new Psalter and a new Lectionary, using the Catholic edition of the New Revised Standard Version of the Bible, which also uses limited inclusive language. A revised New American Bible Lectionary, approved by the U.S. bishops, still awaits Vatican approval.

1993-94: The English translation of Pope John Paul II’s new Catechism of the Catholic Church is held up by Rome over concerns about its use of inclusive language.

1994-2002: Catholic Biblical Association scholars complete a new revision of the Old Testament; in 2003 a revision of the 1991 Psalter to bring it in conformity with Vatican’s 2001 instruction Liturgiam Authenticam (“The Authentic Liturgy”) is completed.

Reflections on Civil Rights Act: progress made, work still to do

Editorial: US bishops need to confront US president on inhumane treatment of immigrants