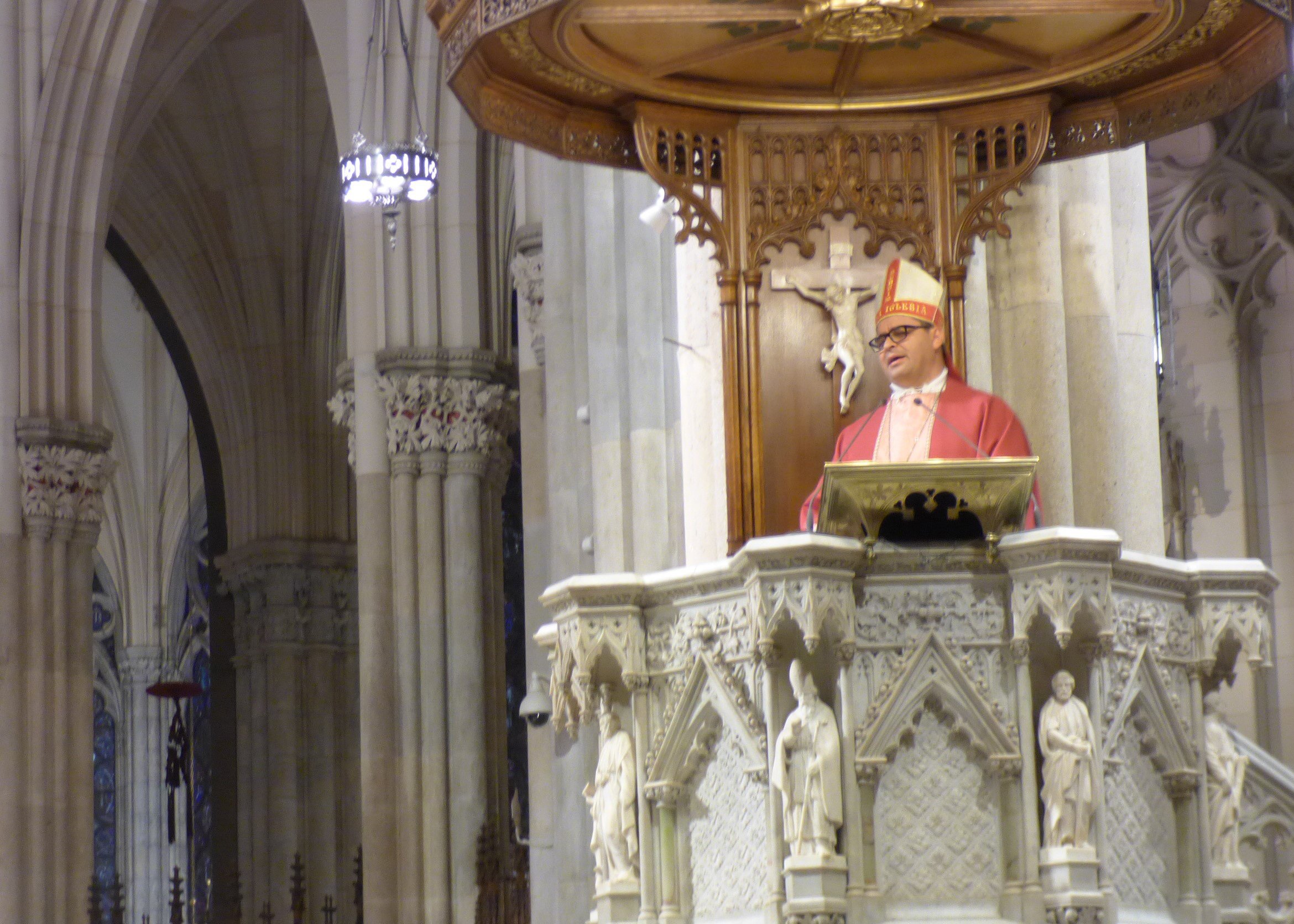 NEW YORK — At the end of one of the bloodiest weekends in the history of El Salvador, which resulted in mass incarcerations and the suspension of personal freedoms in the Central American nation, Salvadoran Catholics gathered March 27 at St. Patrick's Cathedral in New York to honor the country's saint, who defended life and human rights.

"We are praying for the betterment of peace for El Salvador," Wanda Vazquez, director of the Office of Hispanic Ministry at Archdiocese of New York, told Catholic News Service at a Mass for St. Oscar Romero, days after the 42nd anniversary of his March 24, 1980, martyrdom.

El Salvador saw a record 62 homicides March 26, with 14 other murders taking place the day before in the country of more than 6 million.

The government responded by passing a state of emergency law, making it easier to hold people in detention for longer periods preliminarily, suspending for 30 days some constitutional freedoms, such as the right to assemble and state-sponsored defense in court. Government officials said it was necessary to control rising violence.

But those were rights St. Romero fought for and they were remembered in a homily by Salvadoran Bishop Oswaldo Escobar Aguilar of Chalatenango, who celebrated the St. Romero Mass, the second such celebration, which also honors other Salvadoran martyrs at the iconic New York cathedral.

Bishop Escobar remembered St. Romero's "unwavering defense of human rights, but not as a social activist, as many want to see him, but as a Christian, a pastor."

The rights he defended evaded the poor, those "excluded from everything," and that's why he's often called "the voice of voiceless," the voice for those who have no say in the decisions that affect them, the bishop said.

And it's a voice that has traveled through decades and distance.

Father Lorenzo Ato, communications director with New York's archdiocesan Hispanic ministry, who concelebrated the Mass, said he became "a follower" of St. Romero, calling him one of his "favorites" ever since he studied theology in his native Peru.

You can tell St. Romero was affected by his pastoral work, his closeness with the masses "submerged in poverty," a person pained by the sorrows of his people, the misery they suffered, which existed in many places in Latin America, Father Ato told CNS.

And his writings convey those experiences touched by a deep life of prayer, he said.

"He was a humble man. ... I was astonished ... when you see, when you see where he wrote his reflections, on top of a simple table, and out of that came great thought for the whole church. I said 'Wow. How he is illuminated by the Holy Spirit!'" Father Ato said. "He gave me a lot, a lot of strength to be able to preach the Word of God when I came to this country."

St. Romero's words were such that those with or without education could easily understand, particularly when it came to observations of social inequality.

When criticizing a "public order law" that allowed security forces to imprison, punish or "disappear" members of grassroots organizations, such as workers unions, he said: "The law is a poisonous snake: It bites only the barefoot," meaning the poor, those who can't afford shoes.

"Romero said you can't just talk to the poor about God, about spiritual things, you also have to provoke changes that will help them," said Bishop Escobar in his homily, adding that those who knew him said St. Romero, habitually, would begin meditating Saturday night and well into Sunday morning about what to say in his homily.

"I remember, when I was a child, all the houses, all throughout the country, practically, Romero's Sunday Mass, along with his homily, were the most awaited events. ... He was the only one who said what was really happening" in the country, recalled Bishop Escobar, 53.

In the turbulence of those years, St. Romero was a beacon light shining for the defense of the poor, Father Ato said.

Other pastors in other parts of Latin America — dealing with similar situations — took note of what he said when they were seeking the salvation of people, being a church of "firm apostles" to liberate others from sin, he said.

Vasquez said the Romero Mass at St. Patrick's began in 2021 after Cardinal Timothy M. Dolan of New York, put "the proposal to be able to have something done" for St. Romero, canonized in 2018, for the archdiocese's growing number of Salvadoran Catholics, who wanted a Mass for their martyrs.

Last year, some of them brought icons of a group of Jesuit priests killed in El Salvador in 1989, four U.S. women who served in El Salvador and were assassinated there in 1980, as well as Franciscan Father Cosme Spessotto, Jesuit Father Rutilio Grande, Nelson Rutilio Lemus and Manuel Solorzano, who were beatified Jan. 22 in San Salvador.

The icons were absent this year since those who brought them were participating in synod activities at the archdiocese, she said.

But this year's Mass, said Father Ato, was an excellent reminder of the memory of St. Romero and what he stood for and what we still need to fight for.

Bishop Escobar also asked for prayers for Ukraine and other countries that experience the violence of war. Even though his country's civil war ended in 1992, with violence and human rights problems still lingering in the country, he asked for the intercession of St. Romero in El Salvador.

"May he help peace and justice reign in our country, as well as the rest of world ... because the project of our God, which we all know, is that we see one another as brothers and sisters," he said.