On nuclear weapons, 'silence is indefensible' 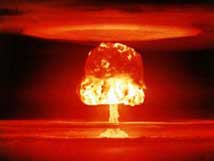 Arundhati Roy, the great Indian writer and activist, has said,
"There's nothing new or original left to be said about nuclear weapons."
Nonetheless, she speaks out because, in her words, "silence would be
indefensible." Silence is the norm. We live our day-to-day lives with
these weapons capable of destroying our cities, our countries, our
civilizations, even our species. How can silence be the norm?

Do we really trust our political leaders and those leaders who
might come to power in the future to never unleash the fury of nuclear
war? Do we believe that all leaders under all conditions, no matter how
rushed or stressed, will refrain from using this power of annihilation?
Perhaps we do, and this would explain the widespread complacency and
silence.

Perhaps we just feel impotent to change the situation. This resignation
is often summed up with the phrase, "the genie cannot be put back into
the bottle." So, we have loosed the genie of atomic might on the world,
and we appear content to let it roam. We seem to lack the cleverness or
motivation even to try to trick the genie back into the bottle.

What were the odds of sudden economic collapse of powerful
financial institutions? What were the odds of the collapse of the
former Soviet Union, or the odds that the Berlin Wall would be
peacefully dismantled? Why does virtually no one see big changes such
as these on the horizon? While they are rarely foreseen, in hindsight
they seem perfectly understandable.

What about the odds of two nuclear armed submarines colliding in
the ocean? The chances of this occurring are infinitesimally small.
Yet, it happened. Such rare occurrences happen. What are the odds of a
nuclear war being unleashed on our planet? Could such a war begin by
accident? Could it occur by miscalculation or overreaching? Perhaps
the odds are small, but they are not zero and therefore they are above
the acceptable level.

The only safe number of nuclear weapons is zero, and to reach
this level will require international cooperation, like every
significant global problem. It will also require leadership and, as the
possessors of over 95 percent of the nuclear weapons on the planet, the
countries that must lead are the US and Russia. If they fail to lead,
the nuclear genie will continue to roam.

Why do we waste our resources on such weapons? Why do we use
our scientists in such dehumanizing ways? Why do we debase ourselves
with our implicit threats of mass murder?

Nuclear weapons diminish our humanity, and our silence condemns
us in the eyes of those who will follow us on this planet.

I and others have said all of this before. Like Arundhati Roy,
I continue to speak out, often repeating myself, in the belief that
silence is indefensible.

David Krieger is President of the Nuclear Age Peace Foundation
(www.wagingpeace.org) and a Councilor on the World Future Council.