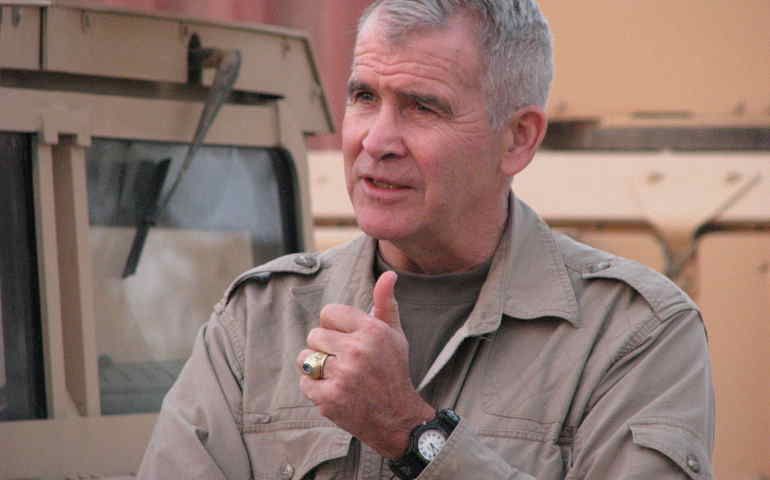 Fox News commentator Lt. Col. Oliver North, of Iran-Contra Affair fame, is the scheduled keynote speaker for a Sept. 13 benefit dinner in Dallas to support the Franciscan Foundation for the Holy Land, a U.S-based ecumenical operation dedicated to assisting persecuted Christians in the Middle East.

This raises the question: Is a polarizing political figure with a bellicose style and history of arms smuggling like North the best figure to represent a cause as serious — and nascent in the public’s imagination — as the plight of Christians in the Middle East?

In the 1980s, as a National Security Council staffer, North became infamous for illegally diverting funds from the sale of weapons in Iran, the subject of an arms embargo, to Central American anti-communist rebels looking to overthrow the Sandinista Regime in Nicaragua — the so-called Iran-Contra affair.

Over the past 10-plus years, North, who is a born again Christian, hosted the Fox News military history program War Stories with Oliver North, the website of which shows him standing in front of an exploding bomb, not unlike a Rambo movie poster.

More recently regarding Iraq, where Pope Francis has expressed caution and urged international cooperation in the use of military force, North has proposed that America go ahead and target the Islamic State inside of Syria.

Appearing on “On the Record with Greta Van Susteren,” North commented on remarks made by President Obama: “He talked at length about the horrors being perpetrated by ISIS. And then he says at the end of this, and this is a quote: ‘We will act against ISIL standing alongside others.’ What the hell does that mean?”

“There has to be a decision made, and this president can do it like that,” said North, who was recently nominated for the Ice Bucket Challenge by Wayne La Pierre of the National Rifle Association. “He has got a pen. He has got a telephone. Start attacking ISIS C.Q., command, control and communication nodes inside Syria.”

Asked about North as a keynote speaker, the Franciscan Foundation for the Holy Land issued the following statement that said North “is an expert on the region. He is also a committed Christian who knows the purpose and intentions of the Church community worldwide; and he is committed to educating our dinner guests about peace with all people of good will who respect the dignity of every human being.”

James Zogby, President of the Arab American Institute, struggled to make sense of the decision.

“A strange choice for the Franciscan Foundation,” he wrote in an email. “Other than his advocacy for gun rights and a militarized foreign policy, Ollie North’s only connection to the Holy Land appears to be his tour business.”

North and his wife host trips to Israel through DuCar International, which according to its website, has been “serving the Evangelical Christian community since 1981.” The website says DuCar organizes tours for churches, Christian ministries, political and television personalities, advocacy organizations and college students.

The website for North’s Holy land tour (olivernorthisrael.com) notes visits to “an operational Israeli Air Force Base” and “a Yom Kippur war bunker.” Other stops include “Old and New Testament sites.”

“There is, however, no mention of visits with actual Palestinian Christians,” Zogby notes.

The Sept. 13 dinner is to be at the Ritz-Carlton, Dallas. "Limited tickets are available and table prices range from $500-$5,000 based on seating and attendance at a Champagne Patron Reception with Col. North and honored guests before the dinner," according to a press release from the Dallas chapter of the Franciscan foundation.