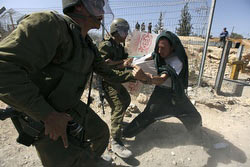 Israeli soldiers scuffle with a protester during a protest against the controversial Israeli barrier in the West Bank village of Bilin near Ramallah Sept. 25. (CNS/Darren Whiteside, Reuters)

The leaders of the thirteen Christian communities serving in the Palestinian territories -- including Latin and Orthodox patriarchs -- have declared the Israeli occupation of the Palestinian Territories a “sin against God and humanity” and urged Christians everywhere to nonviolently intervene to end its injustices.

“Today, we have reached a dead end in the tragedy of the Palestinian people,” wrote the authors of the Kairos Palestine Document, which was issued last month.

“The decision-makers content themselves with managing the crisis rather than committing themselves to the serious task of resolving it," the document says. "The problem is not just a political one. It is a policy in which human beings are destroyed, and this must be of concern to the church.”

The 12-page call-to-action details the consequences of the Israeli occupation for Palestinians and advocates for a Christian response that reflects the church’s universal mission “to bear witness to God and the dignity of human beings.” Such a response, the authors wrote, includes civil disobedience, boycotts, and divestment campaigns.

“Resistance is a right and duty for Christians. But it is resistance with love as its logic,” they said.

A year and a half in the making, “Kairos Palestine” represents “an unprecedented collaboration” among Palestinian Christians, said Rifat Kassis, a Palestinian Christian who coordinated the “Kairos” initiative. While church leaders have issued ecumenical statements on the future of Jerusalem, this marks the first time they have written on the occupation, “so thoroughly and with such wide representation,” he said.

The statement is primarily intended to encourage and motivate Palestinian Christians. A small minority in the region, many are emigrating because of the hardships of the Israeli occupation.

But Kassis said the document is also addressed to the universal church, encouraging its members “to not be passive but to look with compassion on the conflict, to help the two nations. They should exercise as much intervention and pressure in order to bring a just peace.”

“Kairos Palestine” opens with a bleak assessment of the Palestinian experience under Israeli occupation. The separation wall, the expansion of settlements and their acquisition of natural resources, the closure of Gaza, the imprisonment of thousands of Palestinians, and the emptying of Jerusalem of its Palestinian residents impede fair political solutions and contradict “the will of God for this land,” the authors wrote.

In contrast to the sectionalism that plagues the region, the statement emphasizes the land’s “universal mission” to be a place of “reconciliation, peace, and love” and the church’s prophetic mission to stand with the oppressed. Pointed words of criticism are levied at western theologians who give “theological legitimacy to the infringement” of Palestinian rights.

Publicly launched Dec. 11 at a gathering of religious leaders in Bethlehem, “Kairos Palestine” received coverage in the Arab media but scant attention, so far, in the Western press. The document did, however, evoke commentary from Christians for Fair Witness on the Middle East, a pro-Israel, ecumenical organization based in New York city.

A member of that group's executive committee, Msgr. Dennis Mikulanis, said the Palestinian appeal failed to “acknowledge some fundamental truths.”

“I understand that it comes from a place of deep Palestinian suffering. But we will not advance peace by placing all the blame on Israel’s shoulders, or by promoting the false idea that boycotting Israel will solve this conflict,” said Mikulanis, who is also vicar for ecumenical and interreligious affairs for the San Diego, Calif., diocese.

Others have lauded the Christian statement for championing specific action. The national committee for the Palestinian Boycott and Divestment and Sanctions campaign said it “saluted the moral clarity, courage, and principled position conveyed in this new document which emphasizes that resisting injustice should ‘concern the church.’ ”

Several mainline Protestant churches have already begun to consider divestment from companies directly involved in the Israeli occupation of the Palestinian territories.

In 2004, the Presbyterian Church USA passed a resolution calling for “phased divestment” from companies profiting from the occupation. In 2007, the New England Conference of the United Methodist Church identified 20 such companies and recommended individuals divest from them. Included in the list were Lockheed Martin, the biggest overseas supplier for Israel’s armament industry, General Electric, provider of parts for Israel’s AH-64 Apache Assault Helicopter, and Caterpillar, manufacturer of militarized bulldozers and mining equipment used to demolish Palestinian homes.

David Hosey, media coordinator for the U.S. Campaign to End the Israeli Occupation and a missionary with the United Methodist Church, said members of the New England conference of that church are in correspondence with the targeted companies, the first step in “phased divestment.” The Methodists adopted a resolution in 2004 opposing the Israeli occupation of Palestinian Territories. Various regional conferences are now debating whether or not to express that opposition with divestment campaigns.

In December 2008, the Church of England divested 3.3 million dollars from Caterpillar. Church officials said the withdrawal was purely for economic reasons. But it was not publicly announced until February 2009, a month after the Israeli invasion of Gaza and a day before the British newspaper The Guardian was scheduled to publish a letter signed by twenty-three Anglican clergy condemning the Church’s “unethical” investment policy.

As for action from the Roman Catholic Church, Hosey said members of the Sisters of Loretto, a U.S. order of Catholic women religious, were pushing for shareholder resolutions urging Caterpillar to stop its sale of militarized bulldozers to Israel.

Christian calls for divestment have sparked criticism from various Jewish organizations and, at times, strained inter-religious dialogue. But Hosey thinks that could change as more Jewish and Israeli groups endorse using economic pressure to change Israeli action in the Occupied Territories.

Among the religious leaders who spoke at the Bethlehem launch of the Kairos document were American Rabbi Brian Walt, a member of Rabbis for Human Rights and co-founder of the Jewish Fast for Gaza, and Dr. Mark Braverman, executive director of the Holy Land Peace Project. Both praised the Palestinian statement for its call to action. Braverman likened it to Martin Luther King Jr’s, “Letter from a Birmingham Jail.”

“The bold claim in the document that action for justice for the Palestinian people will also bring liberation for the Jewish people struck me as particularly important,” Walt said.

Kassis has created a Web site for the ongoing collection of endorsements. He said the document is being circulated among the member churches of the World Council of Churches, and has also been sent to regional ecumenical bodies, Pax Christi, and Caritas International.

“Soon we are going to ask them about action,” Kassis said.