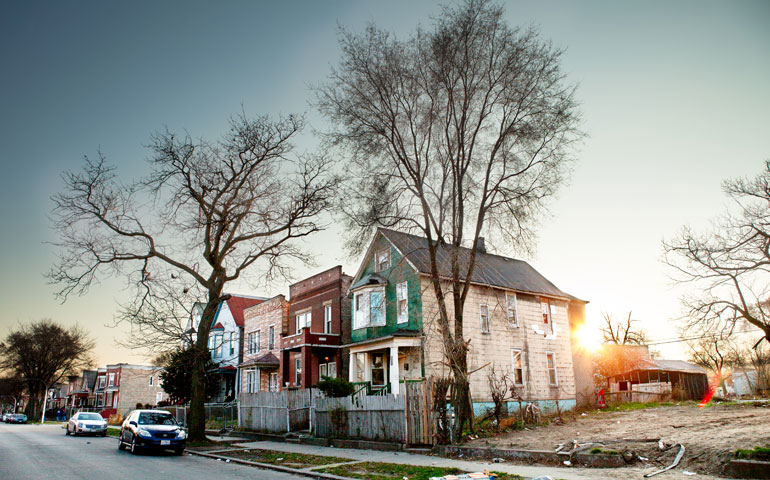 Darrius requested a picture of his "Auntie's house and the whole block of 63rd and Marshfield [in Chicago], at 2:00 p.m., facing east." (Chris Murphy)

They offered to take a photograph of anything he wanted, but Willie just wanted prayers. So he asked them to take a picture of people praying for him.

"The Bald Knob Cross in the Southern area of Illinois with someone of the Christian faith going there praying that I am released from Tamms and that I make parole," Willie requested.

Last summer, Willie brought that photograph -- a circle of people with bowed heads and clasped hands dwarfed by the 111-foot Bald Knob Cross of Peace in Alto Pass, Ill. -- to a party celebrating his freedom. Willie had been granted parole after 36 years in prison, with close to eight years in solitary confinement at Tamms Closed Maximum Security Unit.

Located in rural southern Illinois, Tamms was created in 1998 for "the worst of the worst" prisoners -- men who were too problematic, too violent or too mentally unstable for the general prison population -- according to the Illinois Department of Corrections. By 2009, nearly a third of Tamms' remaining inmates had been locked up for a decade, with an average sentence of six years. Their daily routine was excruciating.

Prisoners spent 23 hours a day in a concrete cell about the size of a parking space. A man could touch the only fixtures, a stainless steel toilet and sink, while lying in bed. Meals were pushed through a thin slot in the cell's steel door, unappetizingly dubbed the "chuckhole."

A guard would shackle a prisoner's feet and hands once a day, leading him to another concrete room called "the dog run." Through an opening in the ceiling, the inmate could feel the sun's warmth or the piercing cold, and occasionally rain or snow. This isolated "recreation time" lasted an hour, and it was the only activity offered besides a five-minute shower three times a week.

In 2008, family members of prisoners, former Tamms inmates, activists, artists and lawyers established the Tamms Year Ten campaign to expose the brutality of the prison and lobby for reform. (See sidebar below.)

Sarah Jane Rhee, professional photographer and Year Ten volunteer, wondered if photographs would help inmates connect to the outside world. Then she learned that prisoners were only allowed to keep a limited number of pictures in their cell.

"For them to get a photograph, they have to give up a photograph," Laurie Jo Reynolds, organizer of Tamms Year Ten, explained to NCR. "So I said, 'Why don't we ask them what they want a photograph of?' That's how the project was born."

Reynolds said that "the gesture of asking has been just as important as getting the photos," calling the responses "joyous and engaged."

One prisoner wrote, "I truly appreciate this. ... Now I know somebody out there in the world cares about us in here."

Another reflected, "I feel forgotten, cast away, but God uses this time to show how he never forgets about us no matter what ... I do feel bless [sic] having you all in my life."

"It's like we replayed a memory or a thought in their mind for them," Reynolds explained. "They were just very touched that someone was willing to do this. I mean, it's really quite a personal thing to ask somebody to do -- what one image do you want?"

In turn, Reynolds said, the volunteers taking photos were asked to "really think about the inmate when they were filling the request. That this was a gesture being made by one person for another person."

A majority of Tamms inmates called the South Side of Chicago home, and judging by their requests, the city was still on their minds.

"63rd and King, 63rd and Calumet, 48th and Wabash and 61st and Indiana," one prisoner requested. The four Chicago intersections, with a beauty supply store, a discount shop and weathered steps leading up to an "L" train platform, reveal a blighted community.

"I've been moved by the everydayness of the requests," said Laura Downton, director of U.S. Prisons Policy and Program for the National Religious Campaign Against Torture. "It's a reminder that the prisoners had a routine, they had favorite spots in the city to visit, and the photographs reveal what it means to be denied the most simple decisions, denied a sense of control."

One inmate longed to see his old neighborhood, which had been razed while he was in prison. The pictures, taken at the warm glow of dawn, show the ghost of the Robert Taylor Homes housing project.

Many of the prisoners simply wanted to see themselves. "If you can place my picture on another background, nothing too much please. Something simple like a blue sky with clouds or a sunset in the distance would be fine," a prisoner requested.

"Nobody escapes from having some symptoms from being in solitary. ... You need to check in with other people ... or your own sense of identity begins to slip. Men speak of depersonalization, feeling like they don't even know who they are," Reynolds said.

Such was the case of a prisoner grieving the death of his mother. He asked for a photograph of her "standing in front of a mansion, or Big Castle, with a bunch of money on the ground." He received a Photoshop picture of his mother smiling as she stood in front of her castle, a Hummer parked out front and money covering the grass like leaves.

Casella knows that there are critics of the project. "People say, 'Aren't there sexual predators or murders who need to be in solitary?' What I think is really powerful about the [project] is that it humanizes people who have been extraordinarily dehumanized. ... It really gives people a window into the prisoner's lives."

Farry has visited death row prisoners for years, and she reflected on their solitary confinement, saying, "They were accused of doing terrible things and some of them even said that they did those terrible things, but to be kept in a cage like that is inhumane."

Tamms closed in January 2013, and now Year Ten is expanding its photo project to New York and California supermax prisons.

"Projects like this serve to remind those of us on the outside who have not been subjected to such torture that those on the inside have families, hearts and dreams," Downton told NCR.

About 16 photographs from the project were displayed in New York Sept. 19-29, along with handwritten requests from the prisoners. Close to 5,000 people attended.

"The viewers are seeing and thinking about something and imagining something that they have never seen before, which is what it's like to live in four gray walls and what you would dream about if you lived there," Jean Casella, editor of Solitary Watch, told NCR.

Willie, confined at Tamms for nearly a decade, said he "felt close to God" there. He prayed with, counseled and taught his fellow inmates about God, unintentionally taking on the role of chaplain as he shouted out his spiritual guidance through the "chuckhole."

In an email to NCR, Willie said that through prayer and study, he found people in Scripture who "were also considered troublesome and imprisoned and even went through solitary confinement."

But, Willie explained, God eventually "saw the good in them and restored them and used them as great men and women to illustrate and contribute to ... constructive changes."

The Tamms Closed Maximum Security Unit prison opened its doors in 1998. After 15 years of bad publicity, protests, lawsuits and budget cuts, the prison was shut down in January 2013.

The Tamms Year Ten campaign, a group of former inmates, prisoners' families and activists, helped bring about the closure. They lobbied at the Illinois General Assembly and spread the word about conditions inside Tamms. The group also kept close to inmates through letter-writing campaigns and bus trips to the prison.

Many of these "hardened criminals" wrote Year Ten about their thoughts of and attempts at suicide. They admitted to self-mutilation, from swallowing sharp objects, to cutting, biting or head-banging, and spoke of fellow inmates who screamed constantly, talked to themselves, pounded on their cell's steel fixtures and smeared feces on the walls. Year Ten used many of these letters as testimony when the Illinois Commission on Government Forecasting and Accountability was determining Tamms' fate.

The brutal conditions inside Tamms were reported by the Belleville News-Democrat, the Chicago Tribune, the American Civil Liberties Union and other activist groups for years, and in 2009, a report submitted by Illinois Department of Corrections to Gov. Pat Quinn validated their claims.

U.S. District Judge G. Patrick Murphy ruled in 2010 that inmates must be given the right to challenge their transfer into Tamms at a formal hearing. Murphy denounced the prison, writing in his nearly 100-page decision, "Tamms imposes drastic limitation on human contact, so much so as to inflict lasting psychological and emotional harm on inmates confined there for long periods."

A version of this story appeared in the Jan 17-30, 2014 print issue under the headline: Photographs connect inmates to outside world.