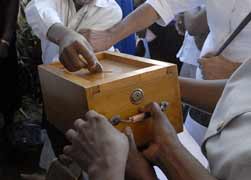 Are Christianity and capitalism a marriage made in heaven, as some conservatives believe, or more of a strained relationship in need of some serious couple’s counseling?

A new poll released April 21 found that more Americans (44 percent) see the free market system at odds with Christian values than those who don’t (36 percent), whether they are white evangelicals, mainline Protestants, Catholics or minority Christians.

But in other demographic breakdowns, several categories lean the other way: Republicans and tea party members, college graduates and members of high-income households view the systems as more compatible than not.

The poll, conducted by the Public Religion Research Institute in partnership with Religion News Service, found that although conservative Christians and evangelicals tend to want their clergy to speak out on issues like abortion and homosexuality, they also tend to hold left-of-center views on some economic issues.

“Throughout the Bible, we see numerous passages about being our brother’s keeper, welcoming the stranger, feeding the hungry, clothing the naked, and healing the sick,” said Andrew Walsh, author of Religion, Economics and Public Policy: Ironies, Tragedies, and Absurdities of the Contemporary Culture Wars and a religion professor at Culver-Stockton College in Canton, Mo. “The idea that we are autonomous individuals competing for limited resources without concern for the welfare of others is a philosophy that is totally alien to the Bible.”

The findings add a new wrinkle to national debates over the size and role of government, and raise questions about the impact of the tea party’s cut-the-budget pressure on the GOP and its traditional base of religious conservatives.

The poll found stronger religious distinctions over the question of businesses acting ethically without government regulation, and whether faith leaders should speak out about economic concerns such as the budget deficit and the minimum wage.

White evangelicals (44 percent) are more likely than other Christians or the general population to believe that unregulated businesses would still behave ethically, and they place a higher priority on religious leaders speaking out about social issues over economic concerns.

Minority Christians, in contrast, believe clergy should be vocal about both areas -- particularly on the economic issue of home foreclosures, which 76 percent considered important, compared to 46 percent of the general population.

“Minority Christians have a deep theological tradition of connecting faith and economic justice, and we see that link in the survey,” said Robert P. Jones, CEO of the Public Religion Research Institute. “Because minorities in the U.S. generally continue to have lower incomes than whites, economic issues are also more salient in these congregations.”


“The most idolatrous claim of the Christian right is that the invisible hand of the free market … is none other than the hand of God,” Walsh said, “and any attempt to regulate the free market, according to this theology, belies a lack of faith in God.”

The Rev. Jennifer Butler, executive director of the Washington-based group Faith in Public Life, said the fact that religious values seem to trump political or class differences can help groups like hers advocate for the poor.

And in ongoing debates in Washington over the budget and cuts to domestic spending, that means “making the wealthiest Americans and corporations pay their fair share in taxes,” she said.

“People of faith have a unique ability to show political leaders that the economy is a moral issue,” she said. “Even some members of Congress are beginning to echo our argument that protecting the most vulnerable as we get out of debt is a moral duty.”

The PRRI/RNS Religion News Poll was based on telephone interviews of 1,010 U.S. adults between April 14 and 17. The poll has a margin of error of plus or minus 3 percentage points.

Death penalty back in pro-life program

When it comes to the Islamic State, all we can do is stand against violence