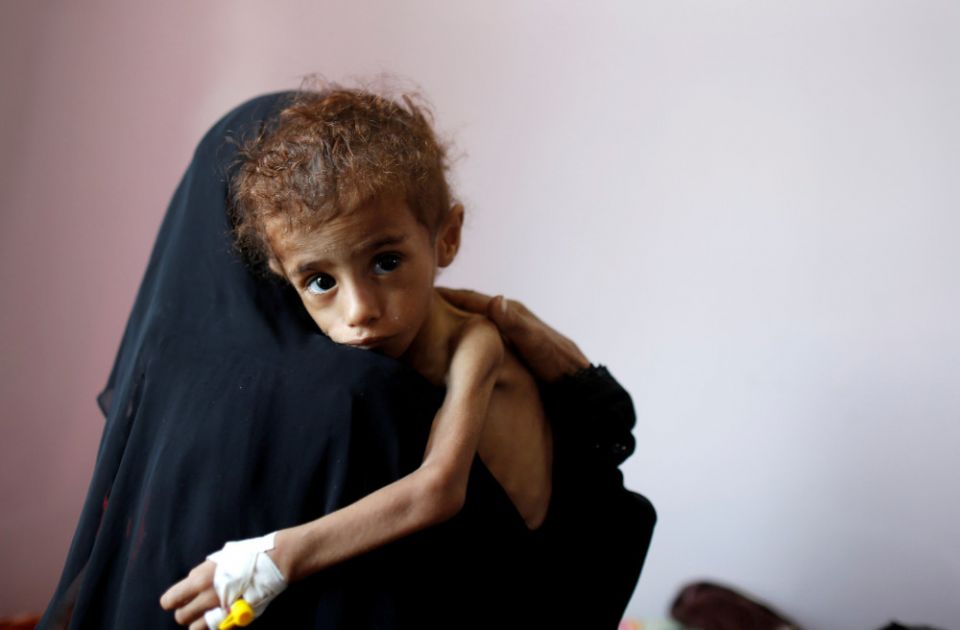 A woman holds a malnourished child at a hospital in Sanaa, Yemen, Oct. 6, 2018. Resolving the global crises of world hunger and malnutrition demands a shift away from a distorted approach to food and toward healthier lifestyles and just economic practices, Pope Francis said in an Oct. 16 message. (CNS/Reuters/Khaled Abdullah)

Vatican City — Resolving the global crises of world hunger and malnutrition demands a shift away from a distorted approach to food and toward healthier lifestyles and just economic practices, Pope Francis said.

"We are, in fact, witnessing how food is ceasing to be a means of subsistence and turning into an avenue of personal destruction," he said in his message to Qu Dongyu, director general of the Food and Agriculture Organization of the United Nations, to mark World Food Day Oct. 16. World Food Day marks the date the Food and Agriculture Organization was founded in 1945 to address the causes of world hunger.

Francis said he hoped the world day theme of 2019 -- "Our actions are our future: Healthy diets for a #ZeroHunger World" -- will be a reminder of how many people continue to eat in an unhealthy way.

"It is a cruel, unjust and paradoxical reality that, today, there is food for everyone, and yet not everyone has access to it, and that in some areas of the world food is wasted, discarded and consumed in excess, or destined for other purposes than nutrition," he said.

"To escape from this spiral, we need to promote 'economic institutions and social initiatives which can give the poor regular access to basic resources,'" he said, citing his encyclical, "Laudato Si'."

The theme also points to "the distorted relationship between food and nutrition," he said. Some 820 million people in the world suffer from hunger, "while almost 700 million are overweight, victims of improper dietary habits," said Francis.

Being overweight is no longer a major health issue in developed countries, he said, but also in poorer areas where people may "eat little but increasingly poorly, since they imitate dietary models imported from developed areas."

Poor nutrition based on excess often results in illnesses, such as cardiovascular diseases, diabetes and degenerative diseases, and poor nutrition has seen an increasing number of deaths related to anorexia and bulimia, he said.

A better understanding of food and its true purpose as well as "a conversion in our way of living and acting" will aid in fighting hunger and malnutrition, the pope said.

"Nutritional disorders can only be combated by the cultivation of lifestyles inspired by gratitude for the gifts we have received and the adoption of a spirit of temperance, moderation, abstinence, self-control and solidarity," the pope said.

"By adopting such a lifestyle, we will grow in a fraternal solidarity that seeks the common good and avoids the individualism and egocentrism that serve only to generate hunger and social inequality," he said.

Francis also highlighted the vital role of the family in continuing traditions of sustainable farming and the production of nutritional products.

"Within the family, and thanks to the particular sensitivity and wisdom of women and mothers, we learn how to enjoy the fruits of the earth without abusing it. We also discover the most effective means for spreading lifestyles respectful of our personal and collective good," the pope said.

This is why the Food and Agriculture Organization has devoted additional effort to protect rural families and encourage family-operated farms, the pope added.

Lastly, the pope underlined the human person must be valued above personal monetary gain.

"The battle against hunger and malnutrition will not end as long as the logic of the market prevails and profit is sought at any cost, with the result that food is relegated to a mere commercial product subject to financial speculation and with little regard for its cultural, social and indeed symbolic importance," the pope said in his message.

"When priority is given to the human person, humanitarian aid operations and development programs will surely have a greater impact and will yield the expected results," the pope concluded.