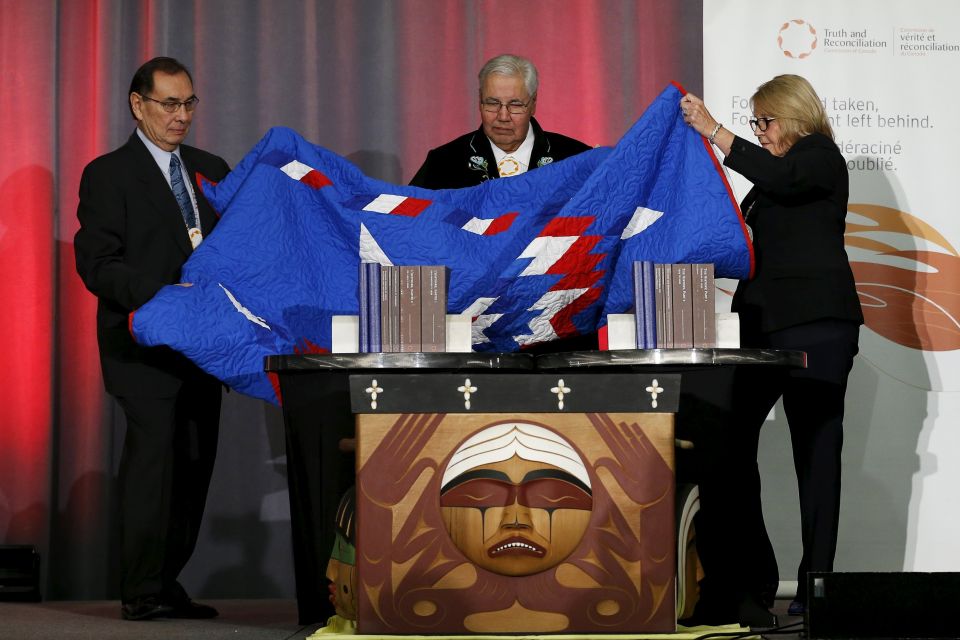 VANCOUVER, BRITISH COLUMBIA — Three prominent lay Catholics and three prominent Indigenous leaders have been named to the board of the Canadian bishops' new charity to promote Indigenous healing and reconciliation initiatives.

The board will help manage the Indigenous Reconciliation Fund, which will accept contributions from 73 dioceses across Canada to fulfill a financial commitment of 30 million Canadian dollars (US$23.6 million) made by Canada's bishops in September. The fund will publish annual reports and will be subject to an audit by an independent accounting firm each year.

The three lay leaders include Barbara Dowding, chancellor of the Archdiocese of Vancouver and a former National Catholic Women's League president with a long history of lay leadership in Canada; Natale Gallo, former supreme director of the Knights of Columbus, who represented Canada on the International Board of Directors; and Claude Bédard, national president of the Society of St. Vincent de Paul in Canada.

Dowding said the bishops were looking for individuals with an understanding of the church across Canada and she hoped "our lay-led focus from the grassroots will help continue to promote healing and reconciliation."

Indigenous members named to the board included:

Dowding told The B.C. Catholic, newspaper of the Archdiocese of Vancouver, that the women's league "has a long history of supporting and reaching out to our Indigenous sisters."

"I believe in its mandate to promote Indigenous healing and reconciliation initiatives with transparency and care," Dowding said. She added that the importance of moving forward partnering with Indigenous peoples across Canada "cannot be emphasized enough."

The Canadian Conference of Catholic Bishops said the board members and its directors "will collectively bring a strong financial acumen and deep commitment to the healing and reconciliation journey."

The promise to raise $30 million for reconciliation came after a series of unmarked graves were discovered at former Indian residential schools, many of which were run by the Catholic Church or Catholic religious orders.

Administrative costs for the fund will be on top of the $30 million being raised and will not be deducted from the principal amount, the bishops said in a statement.

"The bishops of Canada are fully committed to addressing the historical and ongoing trauma caused by the residential school system," said Bishop Raymond Poisson, president of the CCCB. "In moving forward with our collective financial commitment, we will continue to be guided by the experience and wisdom of Indigenous peoples across the country."

The fund will be managed with measures put in place to ensure transparency and good governance, the bishops said. It will prioritize healing and reconciliation for communities and families, culture and language revitalization, education and community building and dialogue for promoting Indigenous spirituality and culture.

Indigenous partners will provide input on how the funds will be spent on four priorities: healing and reconciliation for communities and families; culture and language revitalization; education and community building; and dialogues for promoting Indigenous spirituality and culture.

Regional and/or diocesan granting committees with Indigenous and Catholic members will be established across the country to identify projects that further the fund's priorities, review applications, and request funds to support such projects. The bishops are recommending the committees be chaired by local Indigenous partners.

The bishops said they recognize there has been considerable disappointment with a previous Catholic fundraising campaign tied to the Indian Residential School Settlement Agreement.

"While the CCCB was not party to the agreement, the bishops have recognized the shortcomings of that campaign and learned critically important lessons to ensure that the Indigenous Reconciliation Fund is fully funded and well managed with appropriate oversight," said the CCCB statement.

Anti-drone protesters, including Dorothy Day granddaughter, jailed on bonds up to $10,000