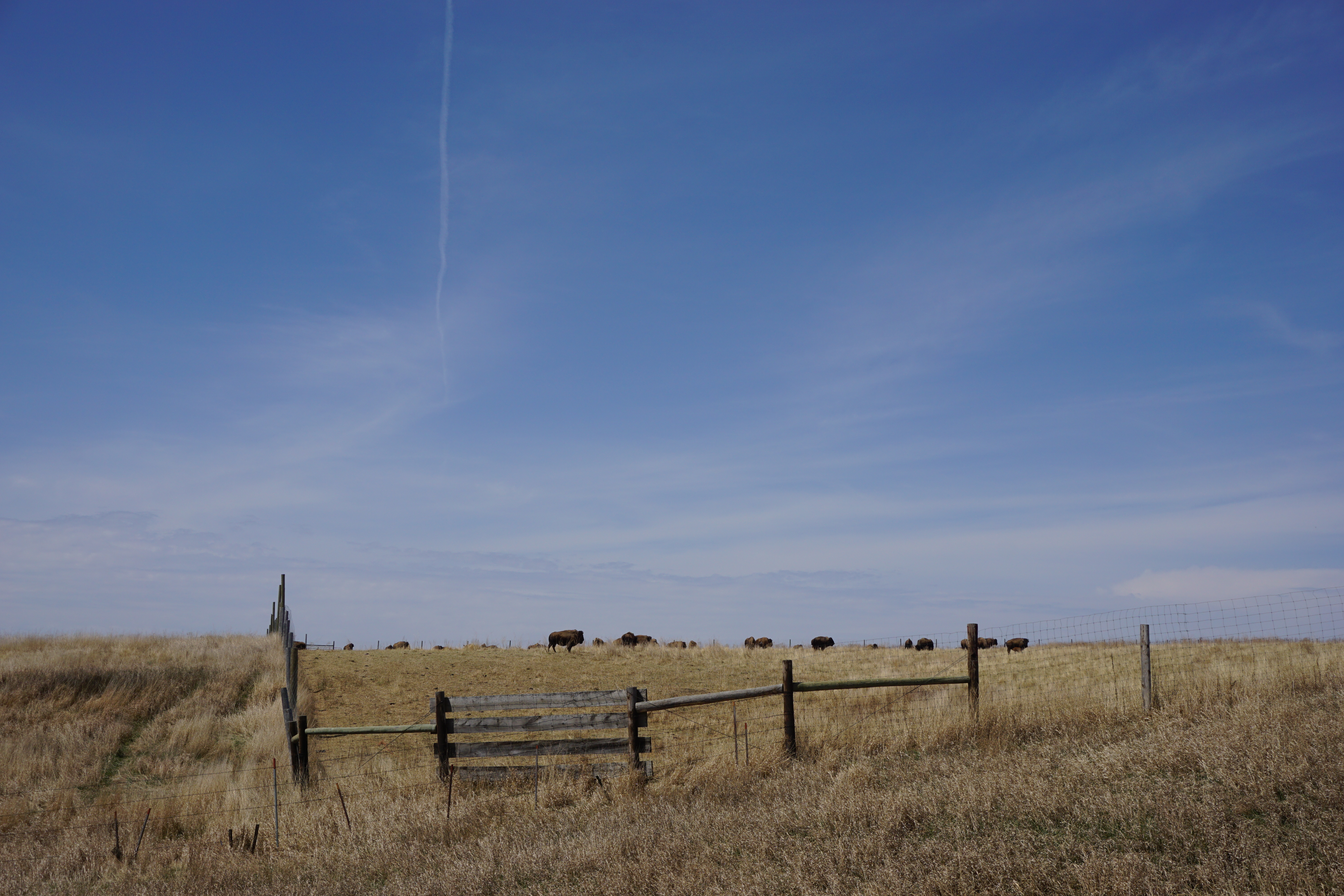 Buffalo are seen along a country road on the Cheyenne River Indian Reservation. (NCR photo/Vinnie Rotondaro)

Medical Mission Sr. Katherine Baltazar, who works for the tribe as a psychiatric nurse practitioner at a hospital in Eagle Butte, says that poverty can be the straw that breaks the proverbial camel's back.

"The removal from their homelands, the boarding school experience," she said, "they're still reeling from that impact, and when you're living in poverty, a core kind of stability is lacking."

The term was coined by Native American social worker and mental health expert Maria Yellow Horse Braveheart in the 1980s.

Braveheart's definition states that historical trauma "is cumulative emotional and psychological wounding, over the lifespan and across generations, emanating from massive group trauma."

"We deal with the repercussions of it," Baltazar said of historical trauma. "You're seeing it in the substance abuse and in depression and in anxiety. … When somebody comes in to see me, it's because of the depression or the anxiety, the sleeplessness. But if you dig deep enough, it comes back to: What they are now doing to themselves was done unto them."

"Black Elk talked about the breaking of the sacred hoop that happened at Wounded Knee when the elders and the children were massacred," she said. "When the elders went, so did the oral history, and how to do things."

Nowadays, many speak of the presence of death as an overwhelming psycho-spiritual force, submerging friends and family in grief, only to slam them back under, like being overpowered by waves at the beach, gasping for air.

"Unresolved grief," said Watson. "One hundred years of unresolved grief. There is no time to work through the grieving process before you have to bury another person."

Karen Ducheneaux sees a direct link between the Doctrine of Discovery and historical trauma.

"But now I realize that we do live our lives in a way that reflects what happened," she said, again beginning to cry, "and we don't even realize it.

"My mom was born under the old agency, under the water," she said. "They took our land, they took our agency and moved us up to this white town," Eagle Butte, originally populated by homesteaders, "where everyone hated us."

How does Christianity fit into this mix? To be sure, some in Cheyenne River couldn't care less.

"I reject all that," said Candace Ducheneaux. "I don't live my life by that, and I haven't for the last 36 years or so."

Ducheneaux, who officially renounced her U.S. citizenship, described herself as a "nobody's Indian."

"I have my own sovereignty that can take me through the world," she said. "I don't need to ask no white man, or definitely no law book, or even no Bible to get that."

Nevertheless, many in Cheyenne River have "bought into" Christianity, she said.

Similarly, Karen Ducheneaux said that people on the reservation tend to be "very patriotic."

Some of the Lakota people are committed Christians. Hollow Horn, for instance, said he prays every day and tries to attend Episcopal Mass as often as possible (while steering clear of Catholicism entirely). Le Beau, too, is a committed Episcopalian, while still embracing traditional Lakota religious values.

For others, deep resentment exists, "because of those very disconnected, un-Christian acts of betrayal," Watson said, acts that were OK'd by the Doctrine of Discovery.

Today, it is often the case that "the Christians that are here are told that they're fools," she said, told "they're stupid for adopting the tradition of the oppressors. And so they're in a bind."

Yet, Watson is constantly reminded of why that tension exists. She recalled a recent visit from a stranger wanting to talk with her about "saving the Indians."

"He walked up and he asked me, 'So why are there so many teen suicides?' " Watson said. "And I wasn't going to get out of my car and invite him to talk because I got a whiff. And I said, 'Well, depression, poverty, despair, PTSD, you name it.' And he goes, 'Oh, you mean it's not the devil?' "

Baltazar, the Catholic sister in Eagle Butte, said, "When I first came out here, I was very open about saying I know I represent the Catholic church with this history of what it did to your people, and I can't apologize for that. But I can offer my services in an attempt to heal this. I'm attempting to be a healing presence around this."

"I'm a Lakota," Bluecoat said. "I'm a real Lakota. I pray the Indian way. And I respect Jesus. I respect God. I respect the church. I love church. It is a place to go and worship. And I was taught by my grandparents, my dad and mom, respect that church, respect the God, because they're praying to a God, some kind of a creator."

But Bluecoat holds serious reservations about the way Christianity plays out in Indian country, and how it affects the people he knows and loves.

He recalled having a conversation with his uncle, a United Church of Christ minister, about wanting to study Christian theology.

He asked for his uncle's "permission," as he was his elder. But his uncle responded by picking up an old Bible written in Lakota and pointing to a passage.

"Do you believe in Jesus Christ?" his uncle asked.

"I don't know," Bluecoat said. "That's kind of hard. I believe that he was a man, put here, and he was like a prophet or a saint or a medicine man, or a holy man. He had powers, he could do things, just like us Indians, we can do things."

"Oh, I dunno," Bluecoat said. "I read it. I grew up with it. But I don't totally agree with all the stuff in there … There's some stuff in there that doesn't go with me."

"Well, it's up to you," his uncle responded. "I don't know if you're going to get the message when you go out there" to theological school. "You don't have to go. You're still a heathen."

Bluecoat, who called himself "kind of a Socratic guy," responded by saying: "Uncle, your dad, my grandpa, they just got introduced to Jesus, to the Bible, not too long ago. So our great-grandpas, our chiefs, the people, the warriors, were they all heathens?'"

Bluecoat ended up attending Andover Newton Theological School near Boston, where he learned about the papal bull Inter Caetera as well as the notion of "discovery," and subsequently grilled his professors.

"When was that put in there?" he recalled asking.

"When was what put in there?" they responded.

As Bluecoat explained it, Christianity's assumption that it has something better to offer, despite all it has taken away, "that's what bothers Indians."

Other Christian groups have repudiated the Doctrine of Discovery. But not yet Catholicism.

"The church hierarchy needs to repudiate this," said Baltazar. What is needed is "a formal repudiation and then a formal apology, and then some steps on how you want to repair this," she said.

Within the church and without, a basic acknowledgment of the history is the first step toward healing, almost all interviewed in Cheyenne River said. But in America today, "you can't even have humility about it because people don't know our history. That's part of the tragedy," said Baltazar.

"There's a duplicity in politics," she continued, "when you have a president who gets up on his high horse about the genocide that Saddam Hussein did to the Kurdish people, and we haven't dealt with our own genocide in this country. Or when we have all this energy going to try to fix the Palestinian-Jewish situation and we have yet to take care of our own land issues in this country."

Candace Ducheneaux, who currently devotes herself to water issues and environmentalism, believes the act of getting right with history cannot wait.

What is happening in Cheyenne River, she said — the poverty, the suicide, the hopelessness — is just "a small example of what's happening all over the world, whether you're talking about this corrupt [tribal] government, or the way the people are not tuned in and relating to the land, and relating to what's around them."

"I think about it all the time," Ducheneaux said, sitting in that playground, two of her 13 grandchildren playing nearby.

"What it's going to take is a spiritual movement," she said, pointing around Eagle Butte.

"It's gonna take the whole world. Because what we're facing is beyond what you see here."

Editor’s note: It may seem like papal statements from 500 years ago are ancient history. But Native American activists and scholars insist that Catholicism's past continues to affect the present. Papal bulls from the 1400s condoned the conquest of the Americas and other lands inhabited by indigenous people. The papal documents led to an international norm called the Doctrine of Discovery, which dehumanized non-Christians and legitimized their suppression by nations around the world, including by the United States. Now Native Americans say the church helped commit genocide and refuses to come to terms with it. This is Part Four of a six-part series on the legacy of the Doctrine of Discovery.


If you are a teacher or involved in ministry: While supplies last, we are offering complimentary reprints of this entire special report. Click here for details.