To see our opponents as neighbors 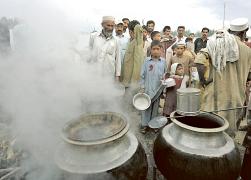 Internally displaced people, who fled a military offensive in Pakistan's Swat Valley region, stand in line June 15 for their ration of tea at a U.N. camp in Mardan district, about 93 miles northwest of country's capital, Islamabad. (CNS/Reuters/Akhtar Soomro)

As guides along a path to peace, I want Jesus of Nazareth, Mohandas Gandhi and the Rev. Martin Luther King Jr. to point the way. Each of them taught, through word and action, that we should intentionally cross barriers between ourselves and our adversaries. When we encounter the enemy as a person, like ourselves, then we can believe in and appeal to that person’s capacity for goodness.

How can we apply this belief to the currently escalating U.S. warfare in Afghanistan and Pakistan where, we are told, groups of Taliban fighters pose a threat to U.S. security and abuse people in the villages and towns that they control? Who are these people we’re now being taught to fear and hate?

These questions were on my mind when I and several other activists with Voices for Creative Nonviolence traveled to Pakistan in late May.

In April, U.S. officials had expressed alarm about Taliban advances that could destabilize Pakistan’s government or lead to Taliban control of Pakistan’s nuclear weapons. Urged by the United States to dislodge the Taliban from areas where it had gained control in northern Pakistan, the Pakistani government began waging military offensives that have, by early July, displaced 3 million people and devastated towns and villages.

Our delegation visited with people who had fled intense fighting in Pakistan’s Swat Valley.

In a vast tent encampment outside the village of Shah Mansoor, we met a shopkeeper who acted as an informal spokesperson for about a dozen men who clustered around us. He said they felt frustrated, fearful and trapped. For 15 days, they had been living in sweltering heat with no water for bathing, no latrines, no electricity and minimal food. They were angry that they’d received no help from the Pakistani government. They expressed deep resentment toward wealthier people in the Swat Valley whom they believed were now living in air-conditioned homes in Islamabad, just as they had in the Swat Valley. “These people lived well at our expense,” said the speaker. Others nodded in agreement. “We are poor people,” the man said, identifying himself as a shopkeeper. Others in the circle worked as farmers, vendors of fruits and vegetables, or transporters.

Taliban fighters who entered the Swat Valley began their recruitment efforts in villages where inhabitants belonged to the region’s underclasses. It should be noted that the vast majority of Pakistanis are impoverished: Thirty-three percent of Pakistan’s population of 170 million live below the poverty line, and nearly 75 percent live on less than $2 a day.

In light of the extreme poverty that afflicts a majority of people in Pakistan, I wonder if many of the recruits who’ve joined Taliban groups are young men who are more or less dispossessed, who don’t have much of a future on the family farm or in an urban setting. Shut out of education, with few prospects for advantageous marriages and no chance of an inheritance, these young men could easily resent people who seem to live an easy life. Such young men might be very vulnerable to preachers who promise an Islamic society that sets up a social welfare system, redistributes the land, and enacts legal procedures aligned with teachings in the Quran. The chance to carry and operate weapons might be an added incentive to join a Taliban group.

We might better understand these young men through comparing them to young people whom U.S. military recruiters approach in high schools, or on the basketball courts and local gyms in areas where young people don’t have much going for them in terms of jobs or education. Young people who join the U.S. armed forces are told they will defend an indispensable nation whose superior interests should be served by people all over the world. Generally, they don’t come from the better-off classes of society. Many are eager for adventure, travel abroad, and a chance to carry or operate weapons.

If U.S. fighters and Taliban fighters were given a chance to sit together and tell their stories, they might discover they have more in common with each other than they do with the war-makers who send them into battles.

We met with a man from Northern Waziristan who had recently visited one of the region’s remote villages, Khaisor, where people had survived a U.S. attack on May 20. The day before the attack, some travelers had come to Khaisor, and obeying standards of compulsory hospitality, the villagers had served them a meal. “This is our custom,” our friend said. “It is our traditional way.” That the travelers were members of the Taliban did not change the custom, but their visit was noted by U.S. forces. It is possible they were identified through pictures studied by U.S. drone pilots watching grainy video from Nevada Army base trailers. Although the visitors had left immediately following their meal, the United States responded to this act of hospitality by attacking them the next morning. At 4:30 a.m., a U.S. drone fired a missile into the village, killing 14 women and children and two elders. Eleven people were injured.

Our friend spoke of the outrage felt throughout the village and the surrounding area. At the funeral, three days later, all of the mourners were in agreement that they should get rid of the Americans.

And yet, when asked if he saw any alternatives to the fighting, our friend immediately said that the attackers -- the people from the United States -- should come and sit with them. “If they come and discuss and throw away the arms, I hope it will be far better than if they are hitting us and trying to bring the peace through arms.

My friend has already organized a jirga, or discussion, between local people and Taliban groups to consider how peace might come to the area. He asked the jirga members, locals and Taliban members, if they wanted peace and they responded, “Yes, why not? Who is such a person that they would not want peace? If the Americans stop the drones and go out from Afghanistan and if the Pakistan army stops the mess they are making in our agency, yes, we want peace.”

It would be naive, of course, to presume that we understand all the dynamics operating between various members of the community meeting my friend had arranged. The Taliban have a record of easing their way into a village, gaining loyalty and then imposing very strict rules and punishing people, sometimes lethally, who don’t abide by them. Do they attract recruits or frighten conscripts into joining? Of course. But if Pakistan’s government could direct resources toward building civil society by strengthening schools, social services, communication and job prospects, it is reasonable to think that people in poor, remote areas that have been neglected by the government might change their minds about cooperating with newcomers from Taliban groups.

It is significant that under the recent Bush administration, the United States gave Pakistan’s former dictator, Pervez Musharraf, $11.9 billion, $8 billion of which was spent on military projects and weapons. Not a single public works project was initiated during the Bush-Musharraf years.

Whether the Obama years will mean anything different is still an open question. Abdul Malik Mujahid, executive producer of Radio Islam, former chair of the Islamic Organizations of Greater Chicago and a man committed to seeking nonviolent solutions, questions the current strategy.

“It is important to note that there was not a single case of suicide bombing in Afghanistan and Pakistan before the U.S. invasion of Afghanistan,” Mujahid said. “We are making a deadly and costly mistake by trying to coerce Pakistan into bombing its own people. President Barack Obama has been reaching out to the Muslim world, seeking diplomacy over militarism. His administration must do the same in Afghanistan instead of ‘Afghanizing’ Pakistan.

“Muslims love freedom as much as Americans do,” he said. “Let us build on that common love.”

Martin Luther King Jr. urged us to seek out the enemy’s point of view, to hear the enemy’s questions and know the enemy’s assessment of ourselves. He believed we could “learn and grow and profit from the wisdom” of those who are called the opposition.

But, first, we have to see them. Seeking the neighborliness that goes beyond tribe, race, class and nation, we have to see each other through the lens of compassion and love. All of our “eyes in the skies,” performing constant surveillance, will never help us see our opponents as potential neighbors. We’ll never really see them at all, as humans who must never be mistaken for objects, until we cast away our weapons.

Justice | To see our opponents as neighbors

What a burial service for 1,780 unclaimed dead tells us about dignity