Shelter helps migrants expelled from US via Mexico to Guatemalan jungle 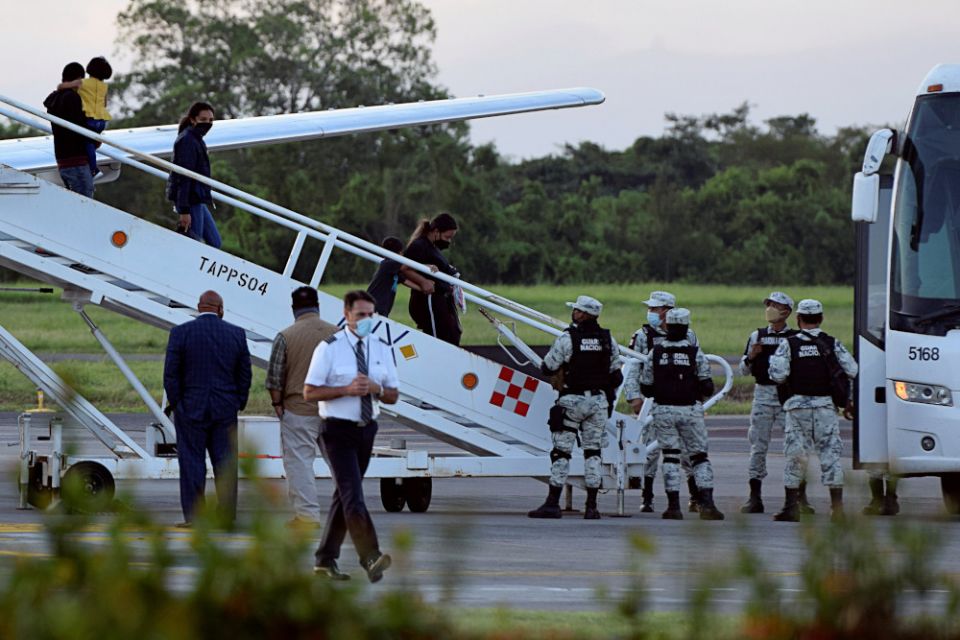 Asylum-seekers deported from the U.S. under Title 42 get off a plane to board a bus at a migration facility in Tapachula, Mexico, Aug. 9, 2021. (CNS photo/Jose Torres, Reuters)

Mexico City — A Catholic shelter on the Mexico-Guatemala border has been assisting busloads of migrants who are being expelled from the United States to southern Mexico, then transported to Guatemala and dropped in a jungle town.

Juan Pablo Saquí, spokesman for the Belen migrant shelter in the Guatemalan border town of El Ceibo, said as many as nine buses daily have arrived at the Mexico-Guatemala crossing. The buses carry migrants who were flown from Texas to Villahermosa, Mexico, then taken 160 miles to El Ceibo, in a remote part of the Petén jungle region.

"Mexican migration authorities say to them, 'In Guatemala ... there's another bus to take you directly to your countries or place of origin,'" Saquí said. "But when they come here, there's nothing."

Saquí says the arrivals at his shelter -- which can host 70 people at a time -- are from Central American countries. Migrants with money purchase transportation to Guatemala City, some 390 miles to the southwest, while others without funds spend time at the shelter until they can pay their passage.

The U.S. government has started sending migrants and asylum-seekers -- expelled under Title 42 public health orders, imposed during the pandemic -- to southern Mexico, where Mexican officials take them to the border with neighboring Guatemala. Civil society and Catholic organizations working with migrants have documented Central Americans being flown from Texas to the cities of Villahermosa or Tapachula and immediately taken to the border.

Jesuit Fr. José Luis González said he first encountered the case of a Central American being sent to southern Mexico, then onward to Guatemala, July 11.

He said the U.S. government previously returned Central American migrants under a safe third-country agreement to Guatemala City, "where there is some infrastructure" to receive them.

"Now it's much worse because they're being taken to the jungle, to a village called El Ceibo, which has four houses," he said.

The arrival of flights from McAllen, Texas, to Tapachula, starting Aug. 9, caught the attention of civil society groups and caused an outcry, said González, coordinator of the Jesuit Migrant Network, Central America and North America.

The statement said a domestic flight arrived Aug. 10 in Tapachula "with persons held in migration centers in central and northern Mexico. From the testimonies collected, these persons detained in the country were explicitly denied, including with insults, the possibility of seeking asylum in Mexico by (Mexican immigration.)"

Families and children were among the migrants being bused to the Guatemalan  border, the statement added.

Alejandro Mayorkas, secretary of the U.S. Department of Homeland Security, confirmed the policy Aug. 12, saying "Our expulsion flights are now increasingly moving into the interior of Mexico, so return ... is not as easy. We are doing so in collaboration with Mexico."

Mexican officials have not commented on the flights. Mexican migrants -- not Central Americans -- have previously been returned to Mexican cities far from the U.S. border.

The removals come as the U.S. authorities detain record numbers of migrants along the southwestern border. More than 212,600 migrants -- the highest monthly total in 21 years -- were detained in July, according to U.S. Customs and Border Protection.

The U.S. government has turned to Mexico in recent years to slow the stream of migrants traveling through the country toward the U.S. border.

Welfare fraud is nothing compared to Pentagon waste and abuse