Some flee Arizona law; others plan for arrests 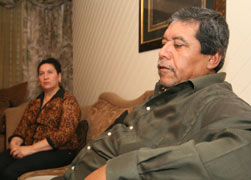 Hermelinda and Manuel Gutierrez talk to a reporter during a May 13 interview in their home in Mesa, Ariz. (CNS/J.D. Long-Garcia, Catholic Sun)

MESA, Ariz. -- Thirty-five years after he first began trying to make a life in the United States, Manuel Gutierrez, a legal resident from Mexico, is taking his family out of Arizona.

Although Gutierrez first came to the United States illegally in 1975 and was soon deported, he returned several times, pursuing legal residency that finally became permanent in 2007. He now runs a successful business and all but his eldest child are U.S. citizens.

But after Gov. Jan Brewer signed a tough immigration bill that would make being in the state illegally a crime, Gutierrez is worried enough about repercussions, especially for his eldest son, that he has found a job in another state.

The measure requires law enforcement to make a "reasonable attempt" to determine legal status during any lawful "stop, detention or arrest" and to arrest those who can't prove their immigration status.

The stepped-up enforcement requirement and the criminalization of illegal status has Gutierrez feeling spooked.

"I feel helpless," he said about the law, scheduled to take effect in late July. "Our brothers are our brothers. If they hurt, I hurt."

Many people are feeling panicked, according to Imelda Flores, Hispanic ministry director at Most Holy Trinity Parish in Mesa.

"We've received many calls from people who are undocumented, but whose adolescent children are citizens," she said. "They're worried about what their children will do if they're deported."

Delia Salvatierra, an immigration attorney, is urging families with undocumented members to have plans in case someone is arrested or deported.

"If they're pulled over and a policeman asks if they're here illegally, they don't need to answer the question," she said. Salvatierra said that puts the burden of proof on the police.

Families with undocumented members should hire an immigration lawyer, she said. Just because someone is arrested, she said, it doesn't preclude a process known as "cancellation of removal."

An undocumented immigrant must meet four criteria to qualify for cancellation: He must have been living in the country for more than 10 years; have a qualifying relative who's a legal resident; be of good moral character; and prove that deportation would cause "exceptional and extremely unusual hardship" for a relative who's a U.S. citizen.

"Families need to know what to do if someone is in detention," Salvatierra said. "You need to act quickly. Timing is crucial."

But they shouldn't wait until then, she said, urging people to find immigration lawyers now to see if they're eligible to become legal residents, Salvatierra said.

It's also a time for families to remember their faith, according to Gutierrez. He and his family are part of a charismatic prayer group at St. Anne Parish in Gilbert, which has been a source of hope.

"I've always had a lot of faith that God would protect us, that he wouldn't let our family be separated," Gutierrez said, adding that some undocumented members of the prayer group are sad and morale is low.

Father Charlie Goraieb, pastor of Queen of Peace Parish, celebrated a Mass of consolation and hope three days after the bill was signed.

"There was no room. It was like Ash Wednesday," he said. In his homily, he spoke of the value the Catholic Church recognized in the presence of immigrants in Arizona -- documented or not.

"They feel very wounded by this, and many people are planning on leaving," Father Goraieb said, adding that most are waiting to see if the law is actually implemented.

"Something important will come from this suffering," Father Goraieb said. "I don't know what. Our political leaders are unpredictable and unreliable. But God is going to bring something better for them."

The parish is setting up resources, offering a place to pray, legal assistance and in some cases help with food, rent and "any kind of problem that could result from detention," he said.

"These families, these communities are people who trust in the Lord. They don't have money or power," Father Goraieb said. "They are simply trying to develop a good life for their kids. So is the Lord going to abandon these people? I don't think so."

Connie Anderson of Valley Interfaith Project said some of the churches that the group works with are reporting attendance down by as much as one-third.

"Many people act as though they're under house arrest," she said. "Going to the store is a scary prospect because they've heard the sheriff will be doing more roundups."

Arizona's bishops have spoken out against the law, saying federal legislation is necessary to address the complex problems of illegal immigration and that the state's attempt to delve into immigration enforcement "would lead to racial profiling, community distrust and a pervasive fear among immigrants." At least five lawsuits have been filed seeking to stop the law from taking effect, arguing, among other points, that it unconstitutionally seeks to supersede federal law and invites racial profiling.

Tucson Bishop Gerald F. Kicanas has for several weeks in a row addressed reaction to the law in his weekly blog. One entry, for instance, explains the church's obligation to speak out on societal issues from a moral perspective.

Phoenix Bishop Thomas J. Olmsted in his column in The Catholic Sun, the diocesan newspaper, called for a spirit of brotherly love in the debate and said, "Without immediate action by the federal government, good people on all sides of this issue will continue to suffer needlessly."

Supporters of the bill, including Robert Kuhn, who attends St. Luke Parish in Phoenix and belongs to the border watch group, the Minutemen, said the law is necessary because "the federal government won't enforce the border, so states have to take it into their own hands."

Volunteering on the border with the Minutemen, Kuhn said he has seen drug and human smuggling. Undocumented immigrants are "dragging on our society," he said. "They have no right to do it."

Justice | Some flee Arizona law; others plan for arrests

Welfare fraud is nothing compared to Pentagon waste and abuse