Trial begins for activists who broke into Tennessee security complex 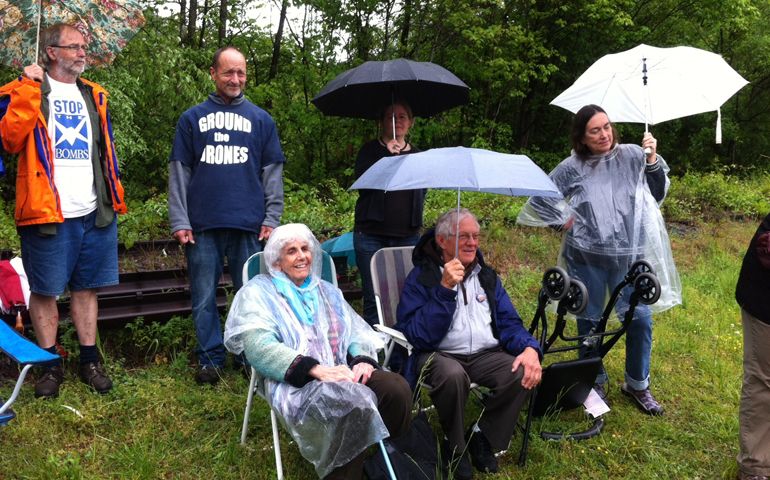 Knoxville, Tenn. — Two days before the start of a trial that could put her in prison, 83-year-old Sr. Megan Rice, a member of the Sisters of the Holy Child Jesus, stood in the sanctuary at Church of the Savior United Church of Christ here with her co-defendants and received a standing ovation.

Rice, Michael Walli, 64, and Greg Boertje Obed, 56, were arrested in July after breaking into the Y-12 National Security Complex in nearby Oak Ridge. Each faces three separate charges of destruction of property, "depredation" of government property, and trespassing. Their trial is scheduled to open Tuesday after jury selection Monday, according to the Knoxville News Sentinel.

More than 100 people on Saturday attended a "Festival of Hope" honoring the three, who call themselves the Transform Now Plowshares, referencing the exhortation found in the books of Micah and Isaiah to turn swords into plowshares and spears into pruning hooks. Rice said she was awed to see such a large crowd, which included people who traveled to Knoxville from as far away as California and Hawaii and even included a film crew from Japanese public television in Tokyo.

"It's just utterly a speechless moment for me to thank you for coming from wherever you are because we're all in it together, and whoever does what, it's all part of the beautiful action that it has become," Rice said. "I sure do feel at home in this gracious community."

Defense attorney William Quigley, one of the attorneys representing the three, said he expects the court to limit what can be introduced regarding the religious or political motivations of the defendants.

"Legal systems are usually not big enough to handle the truth, and courtrooms are often not big enough to handle justice," Quigley told NCR. "But if anybody can make it fit, I think it's these three folks. They've done a beautiful job and they're inspiring, and I think the jury and the judge and the public is going to really hear the story of the truth about these weapons."

The activists are accused of defacing the Y-12 complex's Highly Enriched Uranium Materials Facility, described by the government as a "vital national security asset," after cutting through several fences early July 28 and painting messages in blood on the walls of a uranium storage site, according to an Oct. 23 NCR story. The break-in led to a two-week shutdown of work at the plant and spurred criticism of the facility's security from the highest levels of the federal government.

Oblate Fr. Carl Kabat, a member of the first Plowshare action Sept. 8, 1980, came from St. Louis for the trial. Kabat, 79, who has spent years imprisoned for acts of civil disobedience, said a lack of spiritual and political leadership keeps most Americans in the dark about the nuclear arms race.

"Most Americans don't know or understand the issues raised by the Plowshares groups," Kabat said. "How are they to know if their local bishops and cardinals and politicians don't speak about these issues?"

Kabat carried a flier at the festival that quoted Second Vatican Council document Gaudiem et Spes: "Any act of war aimed indiscriminately at the destruction of entire cities of extensive areas along with their population is a crime against God and man himself. It merits unequivocal and unhesitating condemnation."

"That's Vatican II," Kabat said. "Why don't [bishops, cardinals and politicians] teach that? Because we're the biggest purveyor of nuclear weapons in the world."

[Patrick O'Neill, a freelance writer from Raleigh, N.C., is a longtime contributor to NCR.]

The process of reinventing normal