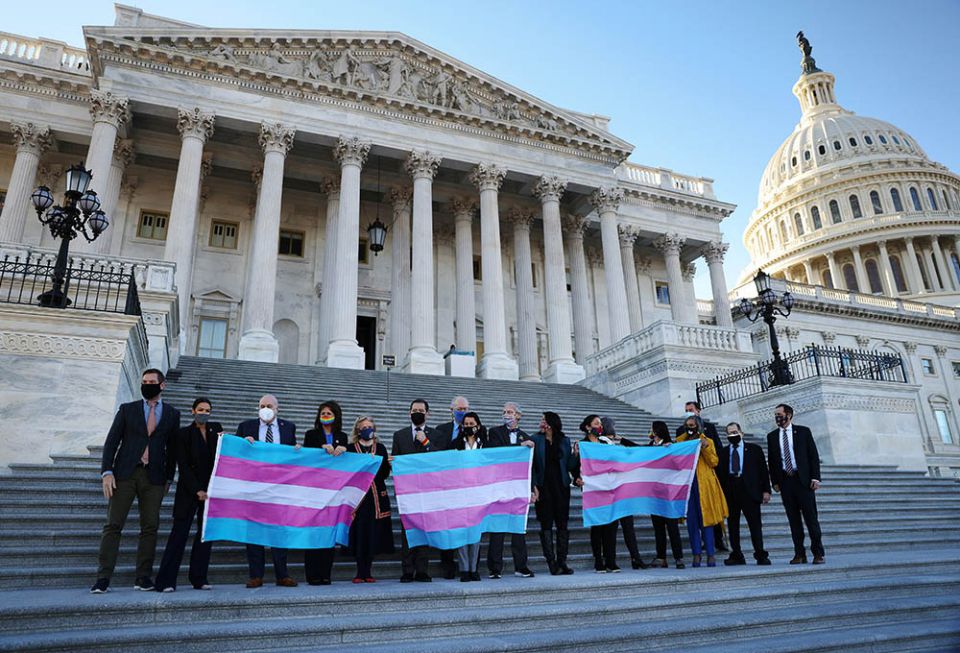 Democratic members of the U.S. House of Representatives pose for a photograph holding Transgender Pride flags on Capitol Hill in Washington Feb. 25, ahead of a vote on the Equality Act. (CNS/Reuters/Tom Brenner)

When the U.S. Congress passed the National Suicide Hotline Designation Act last fall to establish a toll-free number with assistance for those with mental health crises, the U.S. Conference of Catholic Bishops quietly lobbied behind the scenes against the legislation.

A similar path has been taken by the U.S. bishops since March 2013 toward the Violence Against Women Act, bipartisan legislation that established a separate office and additional funding for the prosecution of violent crimes against women.

"All persons must be protected from violence, but codifying the classifications 'sexual orientation' and 'gender identity' as contained in S. 47 is problematic," the bishops wrote in a statement signed by the heads of four committees and one subcommittee.

Relatedly, the bishops have long opposed the Employment Non-Discrimination Act (ENDA), legislation that dates back to 1974 and has been proposed by each Congress since 1994. The bill prohibits discrimination in hiring and employment due to sexual orientation, and the bishops argue that it fails to distinguish "between sexual inclination and sexual conduct" and does "not represent an authentic step forward in the pursuit of justice in the workplace."

"We need to be able to affirm in law and public policy that everyone is made in God's image and likeness and therefore unjust discrimination is wrong, but our bodily reality as male or female isn't discriminatory," Ryan Anderson, president of the Ethics and Public Policy Center, warned in a recent panel discussion sponsored by several Catholic dioceses. "If you get the anthropology wrong in law, it's then going to have serious harms." 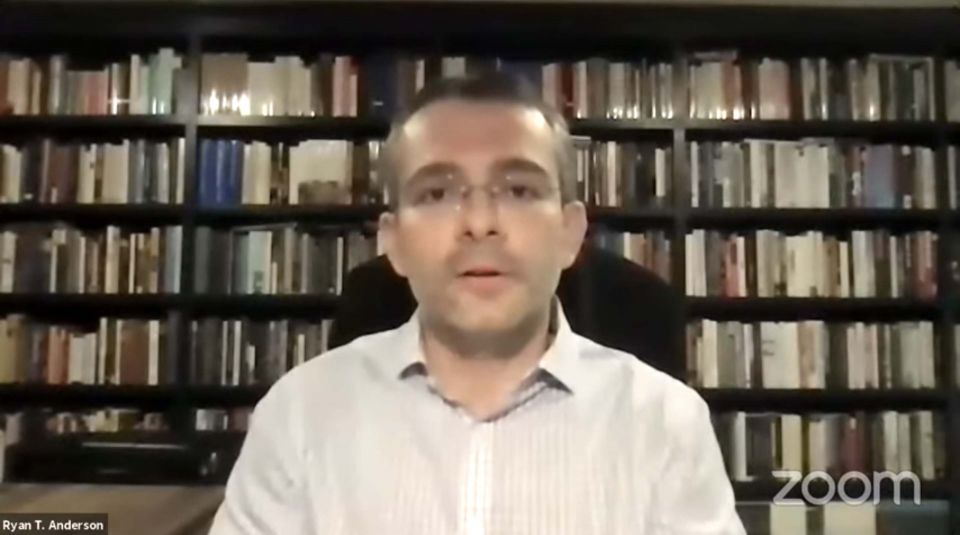 Ryan Anderson speaks during the "The Equality Act and What It Means for Catholics" webinar March 22. (NCR screenshot/YouTube/Catholic Diocese of Arlington)

Such reasoning is, in part, why the U.S. bishops have opposed the recently passed House legislation known as the Equality Act, which would expand federal civil rights protection against LGBTQ persons, while eliminating religious freedom protections.

In an effort to reject any legislation that acknowledges the category of LGBTQ persons, an approach the bishops' conference has followed for years, it has also refused to support compromise legislation to the Equality Act known as the Fairness for All Act, which has received the backing of frequent Catholic-allied faith communities, including the Church of Jesus Christ of Latter-day Saints, the Orthodox Union, and the Council for Christian Colleges and Universities.

Some observers worry that the U.S. bishops' posture is based on a narrow view of the law and bad political strategy.

"Many Americans think that traditional believers seek a general 'license to discriminate' and that hostility to the LGBTQ community is the public face of Christianity," four leading First Amendment scholars wrote in an open letter.

Thomas Berg, a professor of law and public policy at the University of St. Thomas and one of the signers of that letter, told NCR that "a refusal to consider LGBTQ nondiscrimination laws, even when balanced with significant religious liberty protections, makes it very difficult to dispel that attitude."

Equality Act vs. Fairness for All

On Feb. 25, the House of Representatives passed the Equality Act, which would prohibit discrimination based on sexual orientation and gender identity in a range of areas, including federally funded programs, education, employment, housing, access to credit and marriage recognition.

Critics of the bill, who include, in addition to the U.S. bishops, the National Association of Evangelicals, the Church of Jesus Christ of Latter-day Saints, the Seventh-day Adventist Church and the Coalition for Jewish Values, argue that it lacks religious accommodations, most notably becoming the first federal legislation to exempt itself from the Religious Freedom Restoration Act.

More commonly referred to by its acronym as RFRA, the Religious Freedom Restoration Act was introduced by Democrats Ted Kennedy and Charles Schumer and signed into law by President Bill Clinton in 1993. It states that "government shall not substantially burden a person's exercise of religion." If there is a compelling interest to do so, the government must use the "least restrictive means."

"RFRA contains, within itself, the 'compelling interest' test. That is, RFRA does not provide that religious claimants always win," Rick Garnett, a Notre Dame Law School professor and the director of the school's Program on Church, State and Society, told NCR via email. "Instead, it requires close judicial scrutiny in cases where religious liberty is burdened, to be sure that burden is warranted. There is no need to categorically exempt an entire class of significant burdens on religious exercise from judicial review."

Although President Joe Biden has pledged to sign the Equality Act into law, the legislation currently lacks the support it likely would need to pass the U.S. Senate.

The U.S. bishops warned that, if passed, the Equality Act would be a "violation of precious rights to life and conscience."  New York Cardinal Timothy Dolan, chairman of the U.S. bishops' religious liberty committee, recently described the bill as "ill-named" and said it would "chip away at religious freedom."

The archdioceses of New York and Los Angeles and the dioceses of Arlington, Virginia, and Green Bay, Wisconsin, along with the Catholic Conferences of Colorado and Virginia, were joint sponsors of "The Equality Act and What It Means for Catholics" webinar that took place on March 22. Along with Anderson of the Ethics and Public Policy Center, panelists included staffers from Alliance Defending Freedom and Pro-Family Women, all speaking in opposition to the act. 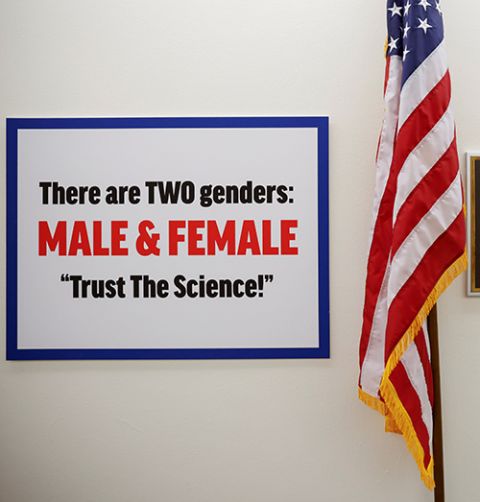 A sign hangs on the wall outside the office of Rep. Marjorie Taylor Greene, R-Georgia, in Washington Feb. 25 that reads, "There are TWO genders, MALE & FEMALE. Trust The Science!" (CNS/Reuters/Carlos Barria)

Fairness for All, by contrast, is modeled after a comprehensive bill passed in Utah in 2015 that garnered the support of both leading religious liberty advocates (most notably, the Church of Jesus Christ of Latter-day Saints) and the state's LGBTQ community.

The proposed Fairness for All legislation, introduced in the U.S. Congress by Utah Rep. Chris Stewart, aims to both outlaw discrimination against LGBTQ individuals in most areas of employment, housing, access to credit and social services, while preserving RFRA and allowing religious organizations and individuals that define marriage differently than the federal government to hire based on their sincerely held beliefs.

While the legislation would add sexual orientation and gender identity-based protections to federal civil rights code, it would also protect faith-based organizations from losing their federal funding if they adhere to a different definition of marriage than the government and would prevent houses of worship from losing their tax-exempt status for doing the same.

Unlike many of their long-standing allies, the U.S. bishops reject this approach.

In a letter sent to Stewart in December 2019, the bishops said they could not support the legislation, warning that, along with concerns about what it would mean for Catholic charitable operations and conscience protections, "the ends (securing the included religious freedom protections) do not justify the means (establishing gender ideology as a basis for a national policy, further undermining the anthropological basis of the family)."

Despite such efforts to combine anti-discrimination provisions for LGBTQ people with provisions aimed at securing religious freedom, the general strategy of most Catholic bishops has been to simply double-down on opposition to the Equality Act, without any consideration of possible alternatives.

"It is not good for the long-term future of religious freedom to have this polarization," said Berg, who is a co-author of Religion and the Constitution.

David Cloutier, a professor of theology at the Catholic University of America, told NCR that the category of "LGBTQ" is one that the bishops have avoided, due to what some bishops perceive as "conflationary."

"The language 'LGBTQ' conflates a set of categories that are different in kind. They are all different things," said Cloutier. "The very language isn't clear about what is included and why it's included. I think the vagueness that is generated by the term leads them [the bishops] to be wary about the ability of the law to make various kinds of distinctions that the bishops would want to be made." 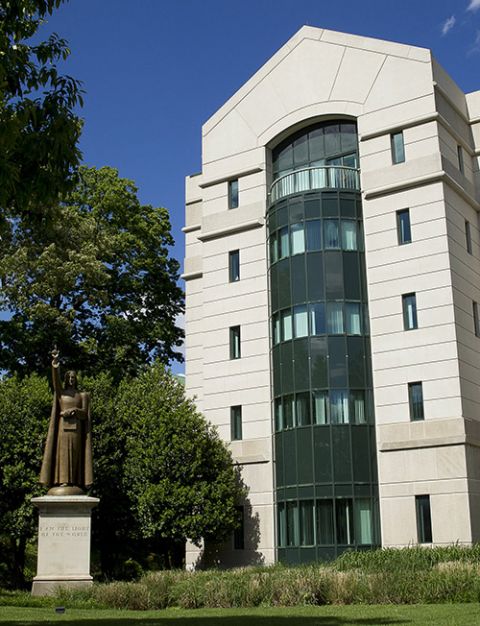 Yet Cloutier also noted that this presents a challenge when the church's "anthropology is not convincing to the general population."

Robin Fretwell Wilson, professor of law at the University of Illinois, told NCR that religious leaders, such as the Catholic bishops, are now "on their back heels," faced with legislation like the Equality Act, which they oppose, without being willing to offer any compromises along the way.

She drew a comparison to the opportunity to get behind legislation such as the Employment Non-Discrimination Act.

"You look at legislation like ENDA, and you think 'how modest,' " observed Wilson, noting that she often wonders how many social conservatives who opposed ENDA now wish they would have supported it, given the more far-reaching alternatives.

"You've got to quit waiting until you're in a minoritarian position," said Wilson, who is co-editor of Religious Freedom, LGBT Rights, and the Prospects for Common Ground. "You need to lead and not try to control things from behind."

Similarly, Berg said that "it's one thing to demand stronger religious liberty protections or clearer resolutions on other specific issues," such as when it comes to rules regarding domestic violence shelters or transgender athletes. "But it's another to say that the very adoption of a nondiscrimination rule establishes a gender ideology."

"A Christian understanding of sex and gender is not about following arbitrary rules," wrote New York's Cardinal Dolan in a recent op-ed. "One's identity is inseparable from one's body. Gender ideology presents a counter anthropology, claiming that one's given body could somehow contradict one's identity."

"We do not and should not assume that adopting an anti-discrimination law implies agreement with the behavior that it may protect," Berg told NCR. "Does protecting against religious discrimination imply indifference about religion and about religious truth? No. It implies that there is a characteristic here that is deep-seated enough in a person that they are significantly harmed by being excluded from the market and from public aspects of life."

"Even people who don't agree with same-sex or transgender conduct can conclude that people should not be denied access to basic goods and services, to housing, or to health care simply because they have those characteristics," Berg continued.

He warns that there's an assumption that anti-discrimination laws involve approving the behavior. The U.S. bishops' position, said Berg, would be against compromise legislation, such as Fairness for All, because in their view, "it establishes the wrong truth about human beings."

For Berg, Fairness for All makes "very significant provisions for religious freedom claims."

While he notes "that is not to claim that every aspect is perfect or couldn't be improved," this position stands in contrast to that of the U.S. bishops' conference.

"If you say we can't support any anti-discrimination protection for sexual orientation or gender identity because such behavior or identity is wrong or flawed," he warned, "then it's very hard to explain to someone else why they should support religious freedom protections or traditional religion when they believe its behaviors or tenets are wrong."

A version of this story appeared in the April 16-29, 2021 print issue under the headline: For US bishops, LGBTQ 'anthropology' rules out Equality Act compromises .

Media outlets highlight division through coverage of US bishops' meeting