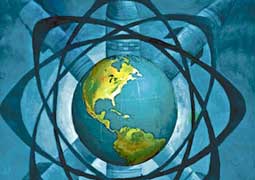 President Barack Obama April 5, speaking in Prague, became the first U.S. president to unequivocally commit the United States to a long-term goal of ridding itself and the world of nuclear weapons.

From 1983 to 1993 the U.S. bishops were a leading voice challenging the conventional Cold War assumptions of most American politicians, defense officials and many others about nuclear deterrence and disarmament.

Sounding a lot like the Obama but decades ahead, the U.S. bishops' pastoral letter, "The Challenge of Peace: God's Promise and Our Response," called for nuclear disarmament. The pastoral changed the way U.S. presidents and other civil leaders began to talk about almost all issues of war and peace.

Meanwhile, the language of the Catholic just war tradition became a standard part of their discourse, even if sometimes it was badly misused.

The pastoral led many other religious denominations in the country to engage in serious moral debate about continuing the U.S. (and Soviet) defensive reliance on a huge nuclear missile force and the ultimate deterrent threat -- mutually assured destruction -- to ward off a possible preemptive nuclear attack from the other side. Catholic bishops' conferences in other countries studied the issues and developed their own statements.

Now, a quarter-century later, the U.S. Catholic bishops, with a few notable exceptions, are strangely absent from a new public debate over nuclear disarmament -- even as leading U.S. policy figures and military analysts from the Cold War have begun to frame the question in ways that the 1983 class of bishops would have welcomed.

What was then a countercultural prophetic voice by the bishops could today be a voice of encouragement and support for a growing new movement toward nuclear disarmament.

Retired Auxiliary Bishop Thomas J. Gumbleton of Detroit, one of two still-living members of the original drafting committee for the 1983 pastoral, said he is disappointed that the U.S. Conference of Catholic Bishops is not actively engaged in helping to frame the national debate today.

Retired Bishop Daniel P. Reilly of Worcester, Mass., the other living member of the original drafting committee, also expressed disappointment that the U.S. bishops did not take the occasion last May for a significant national event to mark the 25th anniversary of "The Challenge of Peace" and remind the nation's Catholics of the pastoral's message and the challenge it still poses.

"People are aware that the situation is very dangerous," he said.

"This was without question a dramatic event," he said. "To have the U.S. Conference of Catholic Bishops issue this statement provided a tremendous level of respectability and legitimacy to what was already emerging as a significant mass movement. Nobody could match the credibility of the bishops and their moral authority.

"And of course in those days we were still up against Soviet communism," he added. "And no one could question the bishops' anticommunist credentials."

Cortright is president of the Fourth Freedom Forum in Goshen, Ind., a private organization that works on peace issues, and a research fellow at Notre Dame University's Kroc Institute for International Peace Studies.

He told NCR that recent events have set the stage for a new moment in the nuclear disarmament movement, but this time the nation's Catholic bishops "have sort of been AWOL on the nuclear issue."

They argued that "the world is now on the precipice of a new and dangerous nuclear era. ... Unless urgent new actions are taken, the U.S. soon will be compelled to enter a new nuclear era that will be more precarious, psychologically disorienting and economically even more costly than was Cold War deterrence."

Cortright called the essay "a remarkably transformative event that has raised awareness and legitimized the position of a world without nuclear weapons."

The essay and the widespread positive response it received led to an October 2007 conference at Stanford University's Hoover Institution, attended by a number of senior officials of six previous U.S. administrations. The conference led to a second joint statement by the original four, endorsed by conference attendees, which appeared in The Wall Street Journal Jan. 15, 2008.

The new op-ed piece expanded on the one from the previous year. It set a more detailed agenda for U.S.-Russian protocols to back off from their hair-trigger nuclear alert systems, to continue their nuclear disarmament programs with renewed vigor, and to set lower thresholds of active weapons. It said such steps, with a vision of total nuclear disarmament as the goal, are needed by the world's two leading nuclear powers in order to send a credible restraining message to emerging nuclear powers like India, Pakistan and Iran.

"Without the vision of moving toward zero, we will not find the essential cooperation required to stop our downward spiral," the essay said.

The core conclusions of the bishops' 1983 pastoral were that nuclear first use could never be morally justified and that nuclear deterrence may be morally acceptable only under certain strict conditions:

While the bishops' International Policy Committee has intervened with Congress and the executive branch on some specific issues in recent years -- such as successfully opposing research for the development of a new generation of nuclear weapons and appropriations for relatively small Robust Nuclear Earth Penetrator weapons -- the bishops as a body have not addressed the nuclear deterrence issue substantively since their 1993 follow-up statement, "The Harvest of Peace Is Sown in Justice."

Gumbleton praised the opinion pieces by Shultz and his coauthors. "It's a breakthrough when strong experts on war and war-making say this," he said. But he said they were addressing the issues on a practical basis, while the pastoral had approached them on a moral basis.

He argued that the bishops in recent years "have failed to heed our own pastoral" by not continuing to press the disarmament issue in a public way. What they have done by way of letters to Congress on specific legislation and the like "has been meaningless as far as developing a moral stance among Catholics," he said.

Cortright said there is a renewed interest in nuclear disarmament among the U.S. churches, even among evangelicals, in recent years. "Meanwhile, the Catholic community has been relatively quiet. ... It is striking that the bishops have not been addressing the issue," he said.

It's all about communion