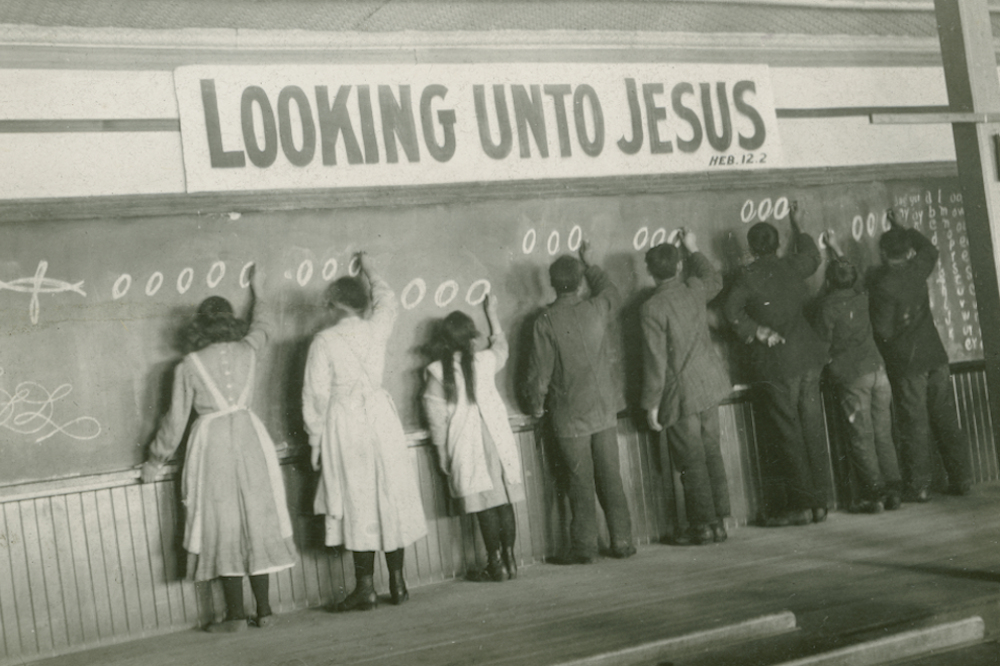 In this 1910s photo, students write on a chalkboard at the Red Deer Indian Industrial School in Alberta. (AP/United Church of Canada Archives)

The discoveries of hundreds of unmarked graves at former residential schools for Indigenous children in Canada have prompted renewed calls for a reckoning over the traumatic legacy of similar schools in the United States — and in particular by the churches that operated many of them.

U.S. Catholic and Protestant denominations operated more than 150 boarding schools between the 19th and 20th centuries. Native American and Alaskan Native children were regularly severed from their tribal families, customs, language and religion and brought to the schools in a push to assimilate and Christianize them.

Some U.S. churches have been reckoning with this activity for years through ceremonies, apologies and archival investigations, while others are just getting started. Some advocates say churches have more work to do in opening their archives, educating the public about what was done in the name of their faith and helping former students and their relatives tell their stories of family trauma.

"We all need to work together on this," said the Rev. Bradley Hauff, a Minnesota-based Episcopal priest and missioner for Indigenous Ministries with the Episcopal Church.

"What's happening in Canada, that's a wakeup call to us," said Hauff, who is enrolled with the Oglala Sioux Tribe.

This painful history has drawn relatively little attention in the United States compared with Canada, where the recent discoveries of graves underscored what a 2015 government commission called a "cultural genocide."

This month, top officials with the U.S. Episcopal Church acknowledged the denomination's own need to reckon with its involvement with such boarding schools.

"We have heard with sorrow stories of how this history has harmed the families of many Indigenous Episcopalians," read a July 12 statement from Presiding Bishop Michael Curry and the Rev. Gay Clark Jennings, president of the denomination's House of Deputies.

"We must come to a full understanding of the legacies of these schools," they added, calling for the denomination's next legislative session in 2022 to earmark funds for independent research into church archives and to educate church members.

Interior Secretary Deb Haaland, the first Native American to serve as a U.S. Cabinet secretary, announced last month that her department would investigate "the loss of human life and the lasting consequences of residential Indian boarding schools." That would include seeking to identify the schools and their burial sites.

Soon afterward, she spoke at a long-planned ceremony at the former Carlisle Indian Industrial School in Pennsylvania, where the remains of nine children who died at the school more than a century earlier were returned to Rosebud Sioux tribal representatives for reburial in South Dakota. 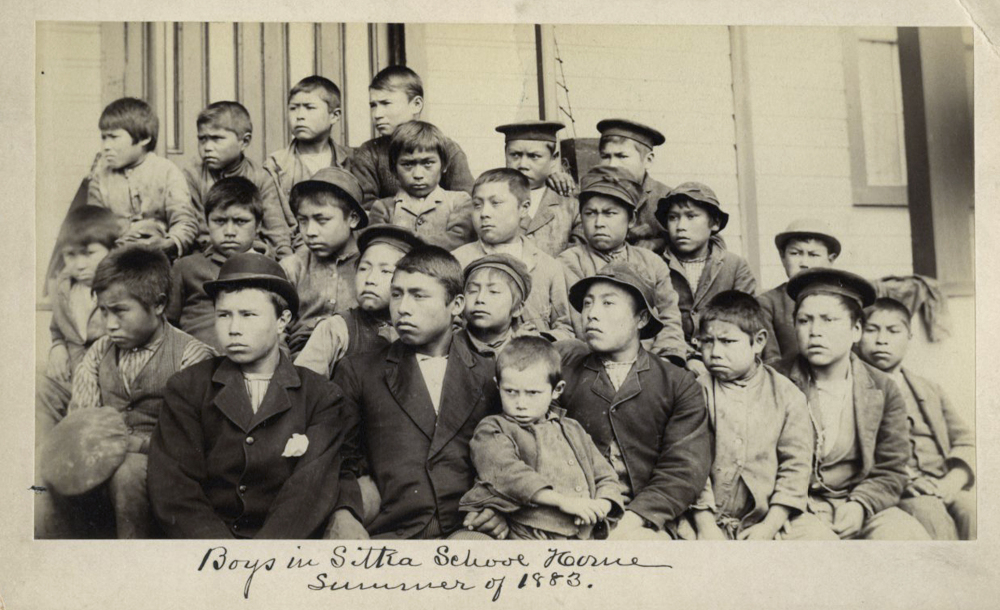 This photo shows students at a Presbyterian boarding school in Sitka, Alaska, in the summer of 1883. U.S. Catholic and Protestant denominations operated more than 150 boarding schools between the 19th and 20th centuries. Native American and Alaskan Native children were regularly severed from their tribal families, customs, language and religion and brought to the schools in a push to assimilate and Christianize them. (AP/Presbyterian Historical Society, Philadelphia)

U.S. religious groups were affiliated at least 156 such schools, according to the National Native American Boarding School Healing Coalition, formed in 2012 to raise awareness and address the traumas of the institutions. That's more than 40% of the 367 schools documented so far by the coalition.

Samuel Torres, director of research and programs for the coalition, said church apologies can be a good start but "there is a lot more to be done" on engaging Indigenous community members and educating the public.

Such information is crucial given how little most Americans know about the schools, both in their impact on Indigenous communities and their role "as an armament toward acquisition of Native lands," he said.

"Without that truth, then there's really very limited possibilities of healing," Torres said.

Hauff noted that the experiences of former students, such as his own parents, ranged widely. Some said that even amid austerity, loneliness and family separation, they received a good education, made friends, learned skills and freely spoke tribal languages with peers. But others talked of "unspeakable, cruel abuse," including physical and sexual assault, malnourishment and being punished for speaking Native languages.

"Even if some of the children did say they had a positive experience, it did come at a price," Hauff said. "Our church worked hand in hand with the government to assimilate these children. ... We need to acknowledge it happened."

"Our church worked hand in hand with the government to assimilate these children. ... We need to acknowledge it happened."

In Canada, where more than 150,000 Indigenous children attended residential schools over more than a century, a National Truth and Reconciliation Commission identified 3,201 deaths amid poor conditions.

The United Church of Canada, which operated 15 such schools, has apologized for its role, opened its archives and helped identify burial sites.

The Rev. Richard Bott, moderator of the United Church, lamented that "we were perpetrators in this" and that the church "put the national goal of assimilation ahead of our responsibility as Christians."

The Catholic Church's response in Canada remains controversial. Canadian Prime Minister Justin Trudeau said in June that he was "deeply disappointed" the Vatican has not offered a formal apology. Pope Francis expressed "sorrow" following the discovery of the graves and has agreed to meet at the Vatican in December with school survivors and other Indigenous leaders.

Canada's Catholic bishops said in a joint statement this month that they are "saddened by the Residential Schools legacy." In Saskatchewan, bishops have launched a fundraising campaign to benefit survivors and other reconciliation efforts.

The U.S. Conference of Catholic Bishops, meanwhile, said it would "look for ways to be of assistance" in the Interior Department's inquiry.

"We cannot even begin to imagine the deep sorrow these discoveries are causing in Native communities across North America," spokeswoman Chieko Noguchi said.

Read this next: Why hasn't Pope Francis apologized in Canada? Ask the bishops.

"It has taken us too long to get to this apology. Many of your people who deserved the apology the most are gone."

Influential voices such as the Jesuit-affiliated America Magazine are urging U.S. Catholic bishops not to repeat their mishandling of cases of child sex abuse by priests and other religious leaders.

"For decades the people of God were anguished by the obfuscation on the part of those church leaders who allowed only a trickle of incomplete document releases from diocesan and provincial archives while investigators struggled to get to the truth," the magazine said in an editorial. "The church in the United States must demonstrate that it has learned from ... such failures."

Individual efforts are underway, however, such as at the Red Cloud Indian School in South Dakota, which has formed a Truth and Healing Advisory Committee to reckon with the years it was managed by Catholic orders.

Other churches have addressed their legacy to varying degrees.

Early in 2017, leaders of the Presbyterian Church (U.S.A.) traveled to Utqiagvik, on Alaska's North Slope, to deliver a sweeping apology before a packed school auditorium for the treatment of Indigenous persons in general, and specifically for how it operated the boarding schools.

The Rev. Gradye Parsons, former stated clerk for the denomination, told the gathering that the church had been "in contempt of its own proclaimed faith" in suppressing Native spiritual traditions amid its zeal to spread Christianity, and "the church judged when it should have listened."

"It has taken us too long to get to this apology," Parsons said. "Many of your people who deserved the apology the most are gone."

The United Methodist Church held a ceremony of repentance in 2012 for historic injustices against Native peoples, and in 2016 it acknowledged its role in the boarding schools in tandem with a government effort to "intentionally" destroy traditional cultures and belief systems.

Still, the Native American International Caucus of the United Methodist Church recently urged the church to do more "to uncover the truth about our denomination's role and responsibility in this reprehensible history."