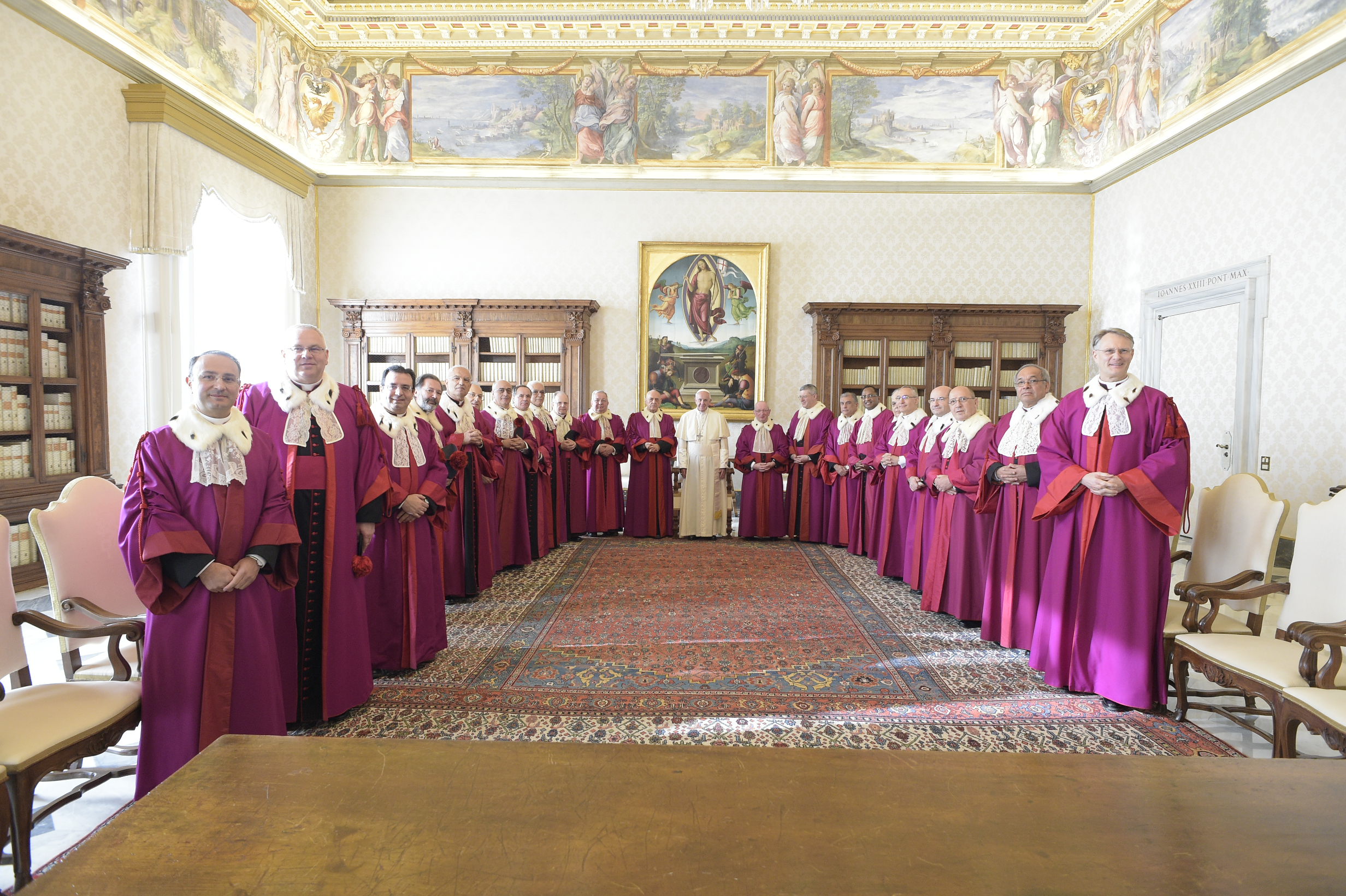 Pope Francis poses with members of the Roman Rota on the occasion of his annual address to members of the court at the Vatican Jan. 29. The Rota is the highest appeals court in the Catholic Church. (CNS/L'Osservatore Romano)

A judge on a top Vatican tribunal was given a 14-month suspended sentence by an Italian court for possessing child pornography and sexual molestation. He then resigned his position on the Roman Rota, the tribunal.

According to the Italian newspaper La Stampa, Msgr. Pietro Amenta, a judge on the Rota, a court that deals mainly with marriage cases, accepted the terms of plea bargain Feb. 14.

Amenta was detained by police in March 2017 after he was accused of fondling an 18-year-old man in a public square in Rome. The young man followed him and called the police, who subsequently took Amenta into custody, Italian newspapers reported.

In the investigation that followed, police apparently found pornographic images involving minors on the monsignor's personal computer. The Italian press also said the investigators discovered that Amenta was accused of "obscene acts" in 1991 and sexual molestation in 2004. Neither of those allegations led to a conviction.

In early February, the Vatican City State prosecutor, Gian Piero Milano, said that his office was recently made aware of "two cases of different configuration and relevance within the scope of crimes against people, particularly against minors."

"The investigations underway are in the preliminary stages and are being carried out dutifully with absolute discretion out of respect for all people involved, as well as with the firm determination to probe into all the factual, juridical and human aspects regarding the validity and the contents of the alleged crimes, in search of the truth," Milano said Feb. 3 at a session marking the beginning of the Vatican tribunal's judicial year.

Milano did not name either of the suspects in the two cases, but since the Italian court decision was announced, it was assumed that Amenta's case was one of them. The other is presumed to be that of Msgr. Carlo Capella, a former Vatican diplomat recalled from service in Washington in 2017 shortly after the Vatican was notified by the U.S. Department of State "of a possible violation of laws relating to child pornography images by a member of the diplomatic corps of the Holy See accredited to Washington."

An arrest warrant was also issued in Canada for Capella one month later for accessing, possessing and distributing child pornography.

The Vatican promoter of justice, the chief prosecutor for Vatican City State, "opened an investigation and has already commenced international collaboration to obtain elements relative to the case" against Capella, the Vatican said in late September.