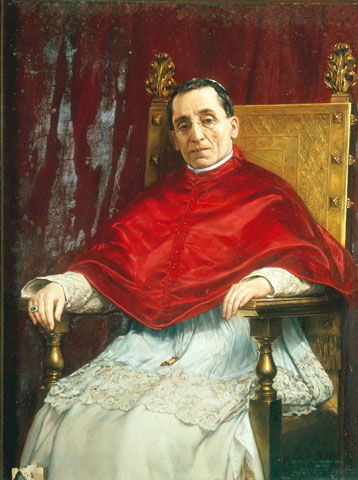 Pope Benedict XV was archbishop of Bologna, Italy, in June 1914 when the pistol shots of a Serbian nationalist in Sarajevo murdered Austrian Archduke Franz Ferdinand and his wife, Sophie, and echoed throughout the world.

On Aug. 20, 1914, with World War I less than a month old, Pope Pius X died, and on Sept. 3, 1914, Benedict was elected pope, only four months after being created a cardinal. Crowned on Sept. 6, 1914, he possessed the diplomatic experience that the conclave had wanted. The first four years of Benedict's seven-and-a-half-year papacy were to be consumed by his ultimately unsuccessful attempts to stop a war that he condemned as "the suicide of civilized Europe."

Born Giacomo della Chiesa in Genoa 1854, the sixth child of an ancient but poor patrician family, Benedict was ordained in 1878, spent much of his life in the Vatican's diplomatic service and became undersecretary of state in 1901. In 1907, he became archbishop of Bologna.

As archbishop, della Chiesa spoke of the church's need for neutrality and to promote peace and ease suffering, but his role as a peacemaker and conciliator came up against several obstacles that predated the war. The conflict ("the Roman question") between Italian state and church, which had existed since 1870, was unresolved. Coolness between the Vatican and Russia stemmed from tensions with the Orthodox church, while the unification of Germany in 1870 had made it a dominant Protestant power in Europe, at the cost of Catholic Austria and thus lessening the Holy See's influence.

Germany's "Kulturkampf" had, among other things, banned religious orders, withdrawn state subsidies from the church, removed religious teachers from schools, imprisoned clergy, and when the training of priests reverted to the state, half of the seminaries closed.

In France, the church had forfeited property since the separation of church and state in 1905.

In November 1914, Benedict published the first of his 12 encyclicals, Ad Beatissimi Apostolorum. The greatest and wealthiest nations, he said, were "well-provided with the most awful weapons modern military science has devised, and they strive to destroy one another with refinements of horror."

He went on: "There is no limit to the measure of ruin and of slaughter; day by day the earth is drenched with newly shed blood and is covered with the bodies of the wounded and of the slain."

Neglecting precepts and practices of Christian wisdom, particularly concerning love and compassion, were the origins of the evil, and Benedict repeated Christ's exhortation, "A new commandment I give unto you: that you love one another." Nationalism, racism and class conflict Benedict condemned as characteristics of the age. He saw the origins of war in the "contempt for authority, the injustice in the relations between classes, the attainment of material goods made into the sole object of human activity, and the unrestrained striving after independence."

On Dec. 7, 1914, Benedict pleaded with the belligerent powers to hold a Christmas truce, asking "that the guns may fall silent at least upon the night the angels sang," to allow for negotiations for an honorable peace. The plea was officially ignored, but there were informal, haphazard and unauthorized truces along parts of the Western front.

Benedict had to perform a careful balancing act: The faithful existed in large numbers -- sometimes as a majority -- among the belligerent countries and he had to avoid alienating any of them. To do so would cut a swath through the universal church. This was no easy task when, for example, the Italian hierarchy emphatically supported the war and made patriotic pronouncements, causing the Catholic Italians to rally to the flag.

But the pope also believed in action. He opened a Vatican office to reunite prisoners of war with their families, and he tried to persuade neutral Switzerland to take in any combatants who were suffering from tuberculosis. While the Vatican's bank balance was not healthy, he spent 82 million lire on relief work.

In July 1915, Benedict published the apostolic exhortation "To the Peoples Now at War and to Their Rulers." This marked a change to active diplomacy that culminated two years later with the seven-point plan, or a peace note, as it was modestly termed, presented to the warring parties in August 1917. Benedict explained that his neutrality was "appropriate to him who is the common father and who loves all his children with equal affection."

The peace note contained many of the proposals of the 1915 exhortation. It was posited on a peace linked to justice rather than military conquest, a demand for a cessation of hostilities, a reduction of armaments, a guaranteed freedom of the seas, international arbitration, and Belgium restored to independence and guaranteed "against any power whatsoever."

All sides should forgo claims of compensation (which were to prove so disastrous a part of the Versailles Treaty later), Benedict said. But as most of the damage, in places like Belgium and France, had been caused by Germany, the Allies saw this idea as effectively favoring their principle enemy. Only Britain did not oppose the note outright and was willing to explore the possibilities. Germany's initial interest was lost when the collapse of Russia made Allied victory more likely. French President Georges Clemenceau saw the proposals as evidence that the Vatican was anti-French. (The clergy even spoke of "Papa Boche.")

American President Woodrow Wilson declared that peace was impossible, and saw the proposals as no more than a return to prewar arrangements without tackling the situation that had led to war. However, in January 1918, he enshrined many of Benedict's ideas in his "Fourteen Points" for shaping the postwar peace.

Fifteen months after the peace note, Benedict had no place at Versailles, as a secret treaty by the Allies in 1915 (prompted by Italy, as the Roman question remained unresolved) had agreed to the Vatican's exclusion.

In his encyclical Quod Iam Diu, published Dec. 1, 1918, three weeks after the Armistice, Benedict urged all Catholics to pray for peace and those undertaking the peace negotiations. However, he pointed out that true peace had not come, only that hostilities, slaughter and devastation had been suspended.

But Benedict was one of the first to recognize the flaws of the peace. He thought the Versailles Treaty to be "vengeful." His 1920 encyclical Pacem, Dei Munus Pulcherrimum sought international reconciliation. Neither the peace treaty nor the League of Nations, from which the Holy See had also been excluded, were based on Christian principles.

Benedict realized that the chaos and dramatic change that had arisen from the ashes of devastated Europe -- the fall of empires, the creation of new states, the seizure of Russia by communism -- made it necessary to secure the place of the church. He sought good relations between church and state in the new world that emerged from the conflict -- his last allocution in 1921 expressed the need for concordats with the new powers. The prefect of the Vatican Library, Achille Ratti, later Pope Pius XI, went as apostolic visitor to Poland and Lithuania, and Eugenio Pacelli, later Pope Pius XII, as nuncio to Germany.

When Benedict ascended the papal throne, there had been 14 nuncios; when he died, there were 27. He bridged the 16-year-old breach with France by appointing an ambassador extraordinary, and the relationship was enhanced further by the canonization of Joan of Arc in 1920.

Believing that the Russian Revolution might be an opportunity for reunion with the Eastern churches, in 1917 he set up the Congregation for the Oriental Churches and, in 1920, the Pontifical Oriental Institute.

Benedict was known as "the pope of missions" and, long before it became the norm, he urged missionary societies to encourage the formation of native clergy and to seek the welfare of those with whom they worked, rather than the imperialist interests of the countries from which the missioners came.

In December 1919, Benedict gave support to the Save the Children Fund, founded eight months earlier to combat the starvation of children in Germany and former Austria-Hungary. Benedict declared Dec. 28, Holy Innocents Day, when collections could be made.

Under Pius X, Vatican diplomacy had languished, not surprisingly given the Vatican's poor relations with France, Germany, the Italian state and others. However, Benedict, assisted by his secretary of state, Cardinal Pietro Gasparri, revived it and, together with the ending of the isolation of the Holy See, they created the foundations for the international work and profile of Benedict's successors.

As he worked for international harmony after the war, Benedict proved to be a reconciler in his own country and the church. He approved the creation of the Catholic Popular Party, thereby abolishing Pius IX's 1868 decree Non expedit, which forbade Italians to vote or stand in elections (the decree had been modified by Pius X). Benedict encouraged them to join trade unions, and allowed Catholic heads of state, on official visits, to go to the Quirinal Palace, once a papal residence but by then the king's official residence.

Two years before Benedict's unexpected death from pneumonia in 1922 at the age of 67, the Muslim Turks had erected a statue of him in Istanbul to commemorate "the great pope of the world tragedy ... the benefactor of all people, irrespective of nationality or religion." At his death, flags were flown at half-mast on Italian government buildings for the first time on the occasion of a pope's death since the establishment of the Kingdom of Italy.

Benedict has been called "the pope of peace." In the title of John F. Pollard's biography, he is "the unknown pope." In the year that marks the centenary of the beginning of World War I, the millions dead will be remembered, the fall of dynasties discussed, and the consequences of the conflict pondered. It should be a time, too, when the heroic efforts of Benedict find a true appreciation.

[Terry Philpot is a British journalist, and author and editor of 19 books.]

A version of this story appeared in the July 18-31, 2014 print issue under the headline: 1914's pope Benedict XV and the pursuit of peace.