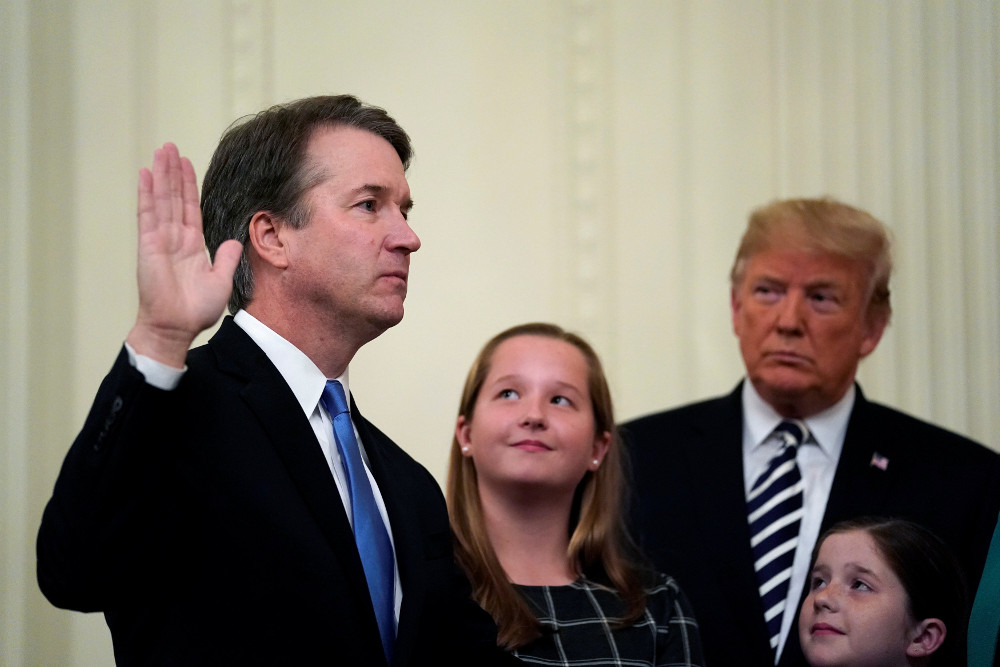 The latest death penalty case to be heard by the U.S. Supreme Court was not about if a death-row prisoner should be executed, but how.

And the newest member of the court, Justice Brett Kavanaugh, could be the deciding vote on the outcome.

The Nov. 6 oral arguments considered if an alternative execution method could be used on Russell Bucklew, convicted of a 1996 murder.

Bucklew, an inmate on Missouri's death row, suffers from a rare medical condition that could cause him to have severe pain if he is executed by lethal injection, which his lawyers argue would violate the Constitution's ban on cruel and unusual punishment. In brief, the inmate has a tumor in his throat that is likely to burst during the lethal injection procedure, causing him to choke on his own blood.

Missouri plans to use an injection of a single drug, pentobarbital, to carry out the long-delayed execution.

So now, without Kennedy, all eyes are on Kavanaugh. How he would lean has been an unknown factor since as a federal appeals court judge he rarely heard capital punishment cases. But in the oral arguments, his pointed questions to the state's attorney indicated he might favor the inmate's request for an alternate form of execution: nitrogen gas.

Kavanaugh specifically asked if the state would still carry out the lethal injection "even if the method creates gruesome and brutal pain," which the state's attorney said it would.

He also asked if the state had planned to make any special accommodations for Bucklew's condition: if he would be lying on a gurney or with his head elevated? Again, yes.

"Your opposing counsel said even if everything goes according to plan, there will still be significant suffering. Can you respond to that?" Kavanaugh asked. The state's attorney disagreed.

The death penalty and its specifics are hardly new to the high court. Three years ago, it ruled that Oklahoma could use a more controversial, three-drug lethal injection protocol citing that prisoners had "failed to identify a known and available alternative method of execution that entails a lesser risk of pain."

The decision, written by Justice Samuel Alito, prompted Justices Stephen Breyer and Ruth Bader Ginsburg to suggest that capital punishment itself might be unconstitutional.

In that opinion three years ago, Alito wrote: "Holding that the Eighth Amendment demands the elimination of essentially all risk of pain would effectively outlaw the death penalty altogether."

In the Nov. 6 oral arguments, Alito did not seem to believe that death by nitrogen gas would be quicker than by lethal injection.

"What are the numbers? And where does that come from?" he asked.

Chief Justice John Roberts similarly had some questions about lethal gas, asking: "How can it be a reasonable alternative if it's never been used before?"

"I don't actually know where in the Eighth Amendment and its history the court made up this alternative remedy idea," she said, "because the Constitution certainly doesn't prohibit cruel and unusual punishment unless we can't kill you at all."

She also pointed out that Bucklew's health condition had changed somewhat since he had a tracheotomy during the summer to help him breathe. The inmate's lawyer said the tube was still in place and he didn't know if or when it would be removed.

Breyer suggested holding a new hearing to determine whether "there really is a special problem" in Bucklew's case.

However the court rules in this specific case, Sotomayor stressed that even a ruling in Bucklew's favor would not "abolish the death penalty with respect to everybody."

Instead, she said it will tell the state: "If you have an individual with a unique circumstance in which a method of execution is going to cause that person excruciating pain, cruel and unusual pain, you better find a different way."

Garrett Epps, a law professor at the University of Baltimore, wrote in the Sept. 18 issue of The Atlantic that however the Bucklew case is resolved, it shows "how fully the court has become enmeshed in the sordid details of official killing. As the population of death row ages, issues of age-related disease and dementia will become more important in assessing individual death warrants, and the court will be the last stop for those challenged."

And Krisanne Vaillancourt Murphy, executive director of Catholic Mobilizing Network, a group that champions restorative justice and an end to the death penalty, said this case and the other death penalty case argued before the court in October, "put the unworkability and inhumanity of capital punishment on full display."

She told Catholic News Service earlier this fall that Catholics "should pay attention to these cases because they serve as important measures of how the highest court in the land is working to defend or disregard human life."