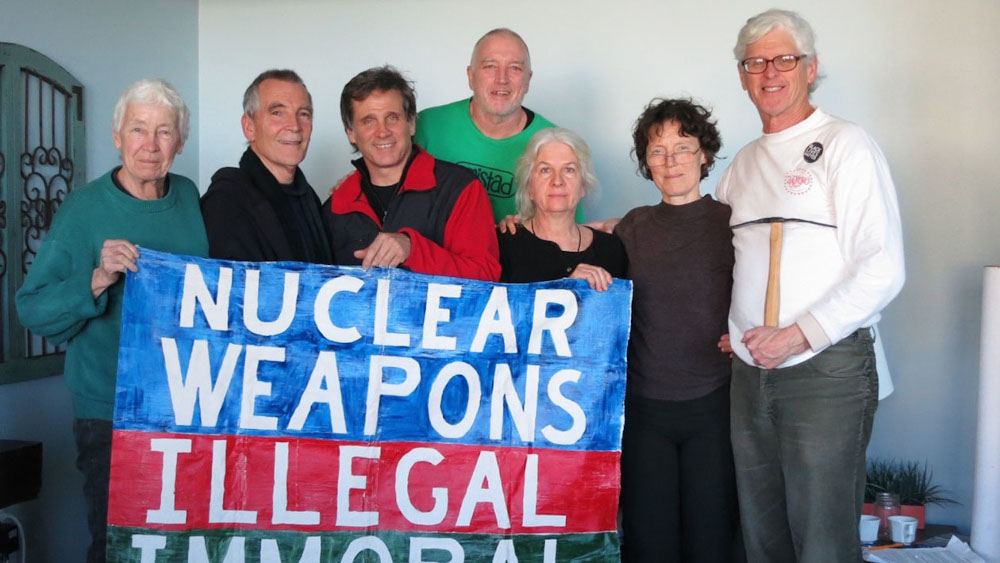 A jury unanimously found seven Catholic activists guilty Oct. 24 of conspiracy, destruction of government property, depredation and trespassing for a 2018 anti-nuclear weapons protest at Kings Bay Naval Base in Georgia.

The verdict, which came after a little more than two hours of deliberation, was the culmination of a four-day trial at the United States District Court for the Southern District of Georgia. The seven activists, who were tried together but received individual verdicts, were found guilty on all four charges brought against them and now face up to 20 years in prison.

The seven defendants, known together as the Kings Bay Plowshares 7, are Elizabeth McAlister, 79; Jesuit Fr. Stephen Kelly, 70; Martha Hennessy, 64; Patrick O'Neill, 63; Clare Grady, 60; Mark Colville, 58; and Carmen Trotta, 57. Five of the seven — all but Hennessy and McAlister — represented themselves.

Bill Quigley, who represented McAlister and is a law professor at Loyola University New Orleans, said in a statement outside the courthouse that it was an "honor to be with these seven brave, courageous, faithful people."

The group was arrested in the early morning hours of April 5, 2018, on Kings Bay Naval Base where they broke in to perform a non-violent protest known as a "plowshares action," taking its name from a verse in the book of Isaiah that says "nations will beat swords into plowshares." The protest included symbolically hammering on statues of nuclear missiles, pouring human blood around the base and hanging banners with messages denouncing nuclear weapons.

In August 2019, a federal judge denied the activists' request to dismiss charges under the Religious Freedom Restoration Act

During the trial, O'Neill told the jury that a dramatic protest was necessary to alert the world to the dangers of nuclear weapons.

Evidence presented by the prosecution suggested the protestors did a total of around $30,000 worth of damage to government property.

Following the verdict, the defendants remained positive and continued to pronounce their message of peace as they gathered with friends and family at a press conference outside the courthouse. They thanked their supporters, told stories, sang hymns and even danced around the sidewalk to profess their continued belief in their mission.

"It's been an incredible experience and it's not over yet," said Hennessy. "The efficiency of the state can never be underestimated yet we proceed in humility. The weapons are still there, the treaties are being knocked down one after the next, but we are called to keep trying and we will do this together. We have no other choice."

Judge Lisa Godbey Wood, who tried the case, ruled Oct. 18 that the defendants would not be allowed to bring in expert witnesses to speak to the dangers of nuclear weapons or the motivations of the defendants.

However, following the verdict, O'Neill expressed gratitude that he and his co-defendants were able to testify about their beliefs concerning the immorality of nuclear weapons.

"I think collectively we said what needed to be said," O'Neill said.

With the exception of Kelly — who remains in custody for outstanding charges in another state — all defendants were allowed to leave the courthouse on bond while they await their sentencing hearing.

Multiple defendants, all of whom are white, connected their case to issues with the criminal justice system and mass incarceration.

"The Pentagon has many installations and we just walked out of one of them," said Colville. "It's a place where they weaponize the law and they wield it mostly against the poor. ... Once in a while people of privilege like us get a taste of it, and when we do, we should hear the word 'guilty' as a blessing on us because it gives us an opportunity to stand with people who hear 'guilty' all the time, every day."

After the verdict was announced, Wood told the defendants they have 14 days to file a motion for a new trial, acquittal or any other motion they see fit.

[Jesse Remedios is an NCR Bertelesen intern. His email address is jremedios@ncronline.org.]