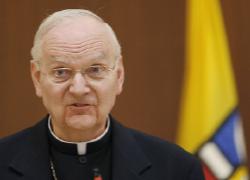 WASHINGTON -- Bishop Donald W. Trautman is calling for a last-minute measure by the U.S. bishops this month to save American Catholics from new Mass prayers full of grammatical errors and unproclaimable texts.

The bishops are set to approve the last four segments of a new U.S. English translation of the Roman Missal at their annual fall meeting Nov. 16-19.

Trautman, the bishop of Erie, Pa., is urging the bishops to reject at least one of these segments, he told NCR Oct. 30.

Trautman said he thinks the only procedural way the bishops can halt the process and gain a new review of texts they have already approved (including Vatican reversals of many of their amendments to earlier texts) is to vote down at least one of the final segments up for review and form a committee to go to Rome and consult with the Vatican on what he considers the questionable texts approved by the Holy See.

There’s simply no doubt that the bad grammar he declaims is there in prayers already approved by the U.S. bishops, or subsequently modified by Rome, which the priest or people are expected to pray during Mass. Which start, like this sentence, with a relative pronoun, making the entire sentence a subordinate clause. Which, he says, is no way to try to make people pray. And entire sentences, like this one, with no subject or verb.

The three non-sentences in the preceding paragraph exemplify what Trautman, a former scripture professor, finds typical of one of the most disturbing issues in the new missal translation facing English-speaking Catholics around the world: a lack of plain, everyday English grammar in liturgical prayers with which Catholics are supposed to express their worship of God.

In many cases, he said, even when U.S. bishops introduced amendments to the proposed English texts to correct blatantly ungrammatical usages, Rome has turned around and reinstated the bad grammar in order to follow the Latin text more literally.

Trautman has been an outspoken opponent of the more literal translation of the Latin texts decreed by 2001 Vatican norms. At the bishops’ meeting last June, after he strongly criticized language problems in one segment -- containing the texts of Masses and prayers for various intentions -- it barely received the two-thirds vote needed for approval.

Trautman’s latest challenge to the translations came Oct. 22 when he delivered the third annual Msgr. Frederick R. McManus lecture at The Catholic University of America in Washington.

McManus, an internationally renowned canon lawyer and liturgist who taught at the university for almost his entire career, was a theological expert at the Second Vatican Council and a leading figure in liturgical reform throughout the English-speaking world before, during and after the council.

“The Latin text is not inspired,” Trautman told his Catholic University audience. “It is a human text, reflecting a certain mindset, theology and worldview. There are good Latin texts -- balanced, carefully crafted -- and there are bad Latin texts -- convoluted, lengthy, complicated, abstract -- that become a translator’s herculean task. Because of literal translation in the new missal, complicated Latin wording has become complicated English wording.”

“For example, in the Preface of Christ the King there are 13 lines and 88 words in one sentence. How will this promote intelligible and meaningful prayer?” he asked.

He quoted from Vatican II’s Constitution on the Sacred Liturgy, which said that liturgical rites and texts “should radiate a noble simplicity. They should be short, clear, free from useless repetition. They should be within the people’s powers of comprehension, and normally should not require much explanation.”

“If a translated text -- no matter how exact and faithful to the original Latin -- does not communicate in the living language of the worshiping assembly, it fails pastorally; it fails to dispose God’s people to participate fully, consciously and actively in the Eucharist,” Trautman said.

Trautman cited a number of grammar problems in a telephone interview Oct. 30. “A clear example of that was when the American bishops voted in 2006 to put in the creed ‘I believe’ four times,” he said. “It was taken out in Rome. So the amendment failed. There’s a lot of examples like that.”

The result is several “sentences” in the Vatican-approved English version of the Nicene Creed for U.S. (and other English-speaking) Catholic congregations that are not really sentences, omitting the subject and verb, “I believe”:

Trautman noted that the Vatican-approved Mexican translation into Spanish of the Latin Roman Missal -- approved for use in Spanish-language liturgies in the United States -- uses “Creo” (“I believe”) all four times in the creed.

So in U.S. parishes that have Masses in both Spanish and English, worshipers at Spanish Masses will be able to pray the creed in grammatically correct language, while those at English Masses will be forced to use a series of ungrammatical quasi sentences to express the most fundamental Christian beliefs, he said.

“Isn’t that inconsistent?” he asked. “It all happens in the same churches: Where you have a parish that is Anglo-Hispanic, the people at the Spanish Mass will say the creed in Spanish saying, ‘I believe’ four times -- ‘Creo’ four times -- [and] you go to the English Mass, you say it once. It’s a great inconsistency. It’s the same text -- it doesn’t make any sense to me.”

He said his struggle for a more coherent and proclaimable text is sometimes a “lonely” battle, but he is encouraged by the number of people, especially pastors, who ask him to keep at it. Within days after the first report on his talk appeared on NCRonline.org, he said, he received about 50 to 60 e-mails expressing support and only a handful objecting to the talk.

He said the few who objected focused on his criticism of arcane or archaic words, which is a much smaller issue than his main concern -- the liturgical use of bad grammar and convoluted, unproclaimable sentences.

The new English translation of the Roman Missal has many good aspects, but “there is much more that still needs improvement to make the text grammatical and accessible to the people,” Trautman said in his Oct. 22 lecture.

“The present text still contains improper syntax, incomplete sentences, archaic and obscure words and idioms, lengthy and incomprehensible sentences, and fails to respect the natural rhythm and cadences of the English language,” he said.

The new translation introduces words “like ‘ineffable,’ ‘consubstantial,’ ‘incarnate,’ ‘inviolate,’ ‘oblation,’ ‘ignominy,’ ‘precursor,’ ‘suffused’ and ‘unvanquished,’ ” he said. “This vocabulary is not readily understandable by the average Catholic.”

As an example of the problems in the new missal translation, Trautman quoted the opening lines of the preface for the second Sunday of Lent: “Who, after he told the disciples of his coming death, manifested his glory to them on the holy mountain to show, as the law and the prophets also bear witness, that the path of suffering leads to the glory of the Resurrection.”

“This is a lengthy subordinate clause ending with a period,” he commented. “While represented as a sentence, it is not a sentence. This is incorrect English grammar.”

He said this was just one of many prefaces in the new translation that begin with a relative pronoun -- “who,” “in whom” or “whose” -- treating a subordinate clause as if it were a sentence. “This is not acceptable English grammar,” he said. “The translators have slavishly transposed a Latin qui clause into English without respecting English sentence word order.”

In 2001 the Vatican issued new norms for translating the Roman Missal from its original Latin edition into modern languages, and in recent years bishops’ conferences around the world have been engaged in the lengthy process of reviewing and approving new translations developed by scholars in accord with those norms. For English-speaking countries, the texts are developed by the International Commission on English in the Liturgy.

After a bishops’ conference approves a translation, the Holy See must confirm that text before it can be published for use in that country. Over the last three years, the U.S. bishops have approved 12 segments of the prayers used in the course of the liturgical year, on the feasts of saints and for various other occasions.

While he has found no major flaws in the final four segments coming up for a vote, the bishop said, he believes that the only way to address major flaws in the already approved texts is to reject one of the final texts as a statement of principle and get Rome to reconsider some of the underlying issues throughout the new translation.

On the imposition of a new “sacred vocabulary” in the new missal texts, he cited several examples, including the passage in Eucharistic Prayer I: “When supper was done, he took this precious chalice in his holy and venerable hands.” The text currently being used says, “… he took a cup …”

“Did Jesus at the Last Supper use a precious chalice or a cup?” Trautman asked. “The Gospels clearly say cup. The Greek uses the word poterion which is a drinking vessel or cup.”

He said no English translation of the Bible, current or older, uses “chalice” to translate poterion or calix, yet the Vatican “has imposed the word ‘chalice’ on the inspired text to carry out this ‘sacred language.’ … To say not just ‘chalice’ but ‘precious chalice’ in Eucharistic Prayer I is clearly not a reflection of the biblical texts.”

He said the U.S. bishops tried to change the new text back to “cup,” but “the Congregation [for Divine Worship and the Sacraments] in Rome changed it. All of this is being done in the name of restoring transcendence.”

“Certainly translated liturgical texts should be reverent, noble, inspiring, uplifting, but that does not mean archaic, remote, incomprehensible,” he said. “The Constitution on the Sacred Liturgy stipulated vernacular language, not sacred language.”

He said scripture “presents God under a twofold image: king and neighbor, transcendence and immanence,” and “an exaggerated attention to the sacred distorts the balance.”

“Our liturgy needs not a ‘sacred language’ but a pastoral language that will fulfill the mandate of the Constitution on the Sacred Liturgy for full, conscious and active participation,” Trautman said. “The noble simplicity recommended by the Council Fathers needs to be emphasized.”

He said amendments made by the U.S. bishops to the new translations done by the Vatican-approved scholars of the International Commission on English in the Liturgy have resulted in a text that “is vastly improved but not mature at this point for the worship life of the church.” And, as he noted by phone later, in the texts so far approved by the Vatican, it has overturned many of the U.S. amendments, changing the text back to the commission’s original version.

At its present stage the new translation “does not have a pastoral style” that would lead American Catholics to “own the prayer text, its vocabulary, its style, its idiom, its cadence,” he said.

“If the Roman Missal does not speak to our culture, the church in the United States will suffer,” he said.