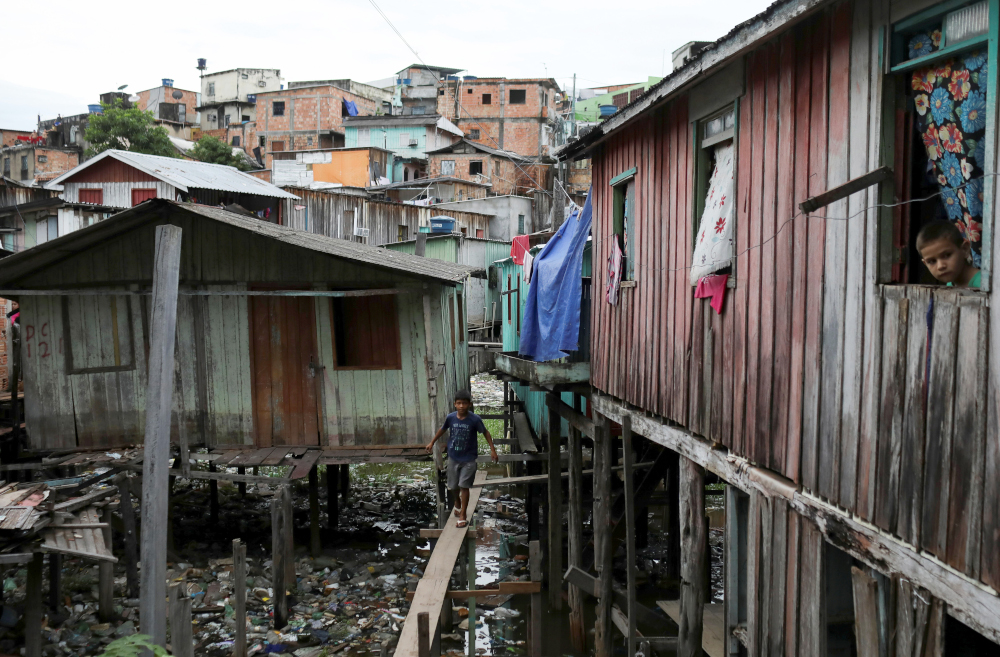 Catholic missionaries in Latin America say they have noticed disturbing signs of an increase in child abuse during the COVID-19 pandemic.

The social turmoil provoked by the disease and some of the restrictions imposed by governments to avoid the further spread of the virus may be amplifying the risks, they said.

On May 26, the World Health Organization said the Americas had become the new epicenter of the disease, as Brazil's daily death rate became the highest in the world. The organization is also concerned about the rising curves in countries like Peru, Chile and El Salvador.

Most countries in the region adopted social distancing measures in mid-March, including broad quarantines in Peru, Argentina and the Dominican Republic. Even in Brazil, where President Jair Bolsonaro has refused to federally impose such restrictions, state governors and city mayors suspended nonessential activities. Throughout the continent, schools are closed and children are at home.

That's precisely what is most worrisome, said Brazilian Sister Roselei Bertoldo, a member of the Missionary Sisters of the Immaculate Heart of Mary who works with the Cry for Life Network, which fights human trafficking and sexual abuse.

"We know that sexual abuse and exploitation most of the times happen inside families. Those problems tend to grow during confinement," Bertoldo told Catholic News Service.

Most children usually denounce abuse at school, she said, "but poor kids don't even have the option of distance education, so we're very worried about them."

During the pandemic, the network had to suspend most of its activities and is currently using the internet to raise awareness on prevention.

"Unfortunately, we frequently get reports from people concerning abuse. We know things are escalating," she said.

The fragility of the state security apparatus in many Latin American regions, intensified with the pandemic, also makes the situation of the victims difficult.

"Families usually fear the aggressor and avoid reporting the case to the police. Now, children are even more vulnerable," Veronica Rubi, director of Caritas in Tabatinga, Brazil, told CNS.

Rubi also is one of the coordinators of a network against human trafficking in the tri-border region. The network was created in 2014 and coordinates sisters, priests, and lay activists from Tabatinga, Brazil; Leticia, Colombia; and Santa Rosa de Yavari, Peru. In 2019, the three bishops of the region established a cooperation agreement.

"It's very easy to cross the borders. Aggressors may have a sense of impunity, given that they can simply hide in another country," Rubi said.

She said her network had to reduce activities with the pandemic but is trying to talk about prevention in any possible way.

"Caritas donated food for more than 400 families in the region. I talked about it (abuse) with each one of them," Rubi said. Reports concerning cases of abuse keep coming to members of her network.

In Peru, the number of phone calls to the Ministry of Women and Vulnerable Populations' hotline doubled during the quarantine. A report of the ministry released at the end of April showed 90 cases of sexual abuse; 59 of them involved underaged victims.

In Madre de Dios department, in the Peruvian Amazon, the government has been combating illegal mining since 2019. Now, with the pandemic, illegal miners may have moved to indigenous reservations, raising the risks of sexual abuse. 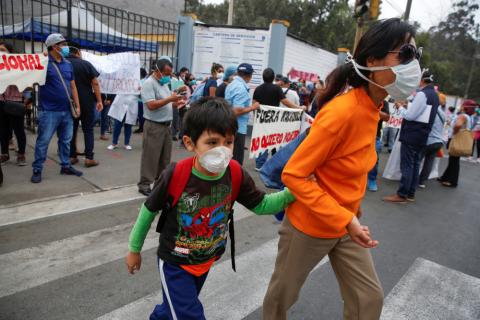 A woman and a child are seen in front of health care workers protesting the lack of proper medical supplies in early May outside a hospital in Lima, Peru, during the COVID-19 pandemic. Catholic missionaries in Latin America say they have noticed signs of an increase in child abuse during the pandemic. (CNS/Reuters/Sebastian Castaneda)

"All roads have been closed off due to the quarantine and authorities are focusing on that. There's no control in other areas," said Carol Jeri, an official of the local Caritas.

Jeri said illegal miners often set up camps in which the prostitution of underaged girls is a constant risk.

"The church has formed an indigenous pastoral commission and is in touch with several community leaders," she said, adding that they try to address the problems reported to them.

In Colombia, besides the increasing number of abuses at home, different armed groups have intensified recruitment in the countryside. With schools closed, the number of teenagers they have attracted has doubled, said Nathalia Forero, a social worker who is also a member of tri-border network.

Since the 1960s, a number of Marxist guerrilla organizations have been active in Colombia. Far-right paramilitary groups and drug cartels also mobilize thousands of armed men and women, many of them teenagers.

"Girls who are recruited by armed groups can suffer much violence, including sexual abuse and exploitation," Forero told CNS. For five years, she worked with the congregation of the Daughters of Charity of St. Vincent de Paul and became familiar with the problem of sex abuse and human trafficking involving children and teenagers. "We feel very impotent at this moment," she said.

Jose Navarro, national coordinator of the Dominican Republic bishops' commission that works with mothers and children, said more risks have been posed to Dominican children and teenagers with the partial reopening of the quarantine in mid-May.

"The adults went back to work, but the schools remain closed. So, many children are alone at home, which can be a problem," he told CNS.

He said his commission offers formation for families on topics such as child nutrition, health and education. Child abuse will be one of the themes discussed this year.

"This way, we can work on prevention," Navarro said.

Rosario Alfaro, executive director of the Mexican organization Guardianes, which works to prevent child sexual abuse, said it is possible many victims currently being molested will never denounce what's happening to them during the pandemic.

"It's difficult for us to talk about things that make us feel embarrassed," she told CNS.

Since the pandemic began, Guardianes has had to suspend the courses it offers in schools about abuse prevention. Alfaro said the quarantine makes many adults grow anxious and stressed with unemployment and the fear of the disease. For adults "unprepared to deal with such emotions, eroticism is the only way to calm down. That's why there are bigger risks of sexual approach of children and teenagers in a moment like this," she said.

She speculated that the current crisis probably intensified problems such as the production and distribution of child pornography and the sexual exploitation of teenagers, traditionally connected to tourist spots.

"Each Mexican state has a particular legislation concerning child abuse. It's very difficult for a child to report a case to the police," she said.

Since 2019, Alfaro has been an adviser to the Mexican bishops' child protection council.

"The church can do much to help. It models and forms behaviors and can guide parents in prevention of sexual abuse and any other kind of violence," she said.