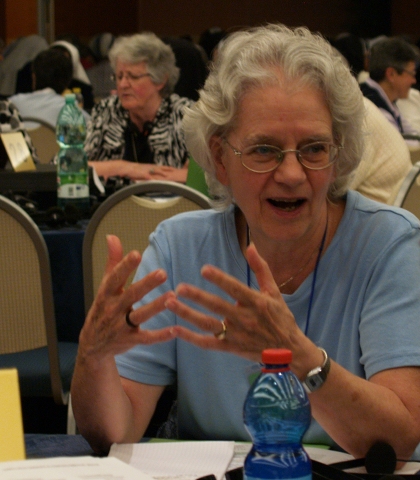 Obeying church authority involves listening to how you hear God speaking to you from the community as well from the mandates of church leaders, the head of the U.S. sisters' group that was ordered to place itself under the review of bishops said Tuesday.

Listening to God, said Franciscan Sr. Florence Deacon, the president of the Leadership Conference of Women Religious (LCWR), includes listening to the "Spirit among all of us."

"If the Spirit speaks among all of us or is in all of us, then authority is listening to others too," said Deacon. "You listen to the will of God in a whole lot of ways."

Deacon, who also serves as the superior general of the Sisters of St. Francis of Assisi in St. Francis, Wis., spoke to NCR at the sidelines of an international meeting of leaders of women's congregations.

The interview, which lasted about 15 minutes, is one of only a few the sister leader has given since she became the head of the U.S. sisters' group last August.

LCWR, which represents about 80 percent of the some 57,000 U.S. sisters, was ordered to revise itself last April by the Vatican's Congregation for the Doctrine of the Faith. Seattle Archbishop Peter Sartain was appointed as the group's "archbishop-delegate," to be assisted by two other U.S. bishops, and given authority over its functions.

LCWR has repeatedly said the reasons cited by the Vatican for the review were not an accurate representation of their work. Speaking to the sisters' meeting Saturday, Deacon said the situation with LCWR and the Vatican indicates there are "serious misunderstandings" between Vatican officials and Catholic sisters.

Cardinal João Braz de Aviz, head of the Vatican's Congregation for Religious, said during a talk at the gathering Sunday that the situation had cause him "much pain" and did not involve consultation with his office.

The international sisters' meeting, the triennial assembly of the International Union of Superiors General, has focused on the theme of servant leadership.

During her interview Tuesday, Deacon focused on what she has been hearing from her peers at the sisters' meeting, the misunderstandings some have about U.S. sisters, and the meaning of dialogue and authority in the church.

Deacon also said that she and the LCWR leadership plan to meet with Sartain and the other bishops "in a couple of weeks" to continue dialogue on the Vatican mandate.

NCR has contacted Sartain repeatedly for comment on his work as LCWR's archbishop delegate over the last 14 months.

The answer the archbishop gave in an email Monday was similar to previous statements: "From the outset of this process I gave the LCWR leaders my assurances that I would communicate directly with them and would not communicate through the media. I intend to keep that commitment."

Following is NCR's full interview with Deacon, edited only slightly for clarity and context.

NCR: We're here with 800 of your peers, sisters from around the world who are leaders of their congregations. What feeling has it given you to be here with them as both the head of your own order and LCWR?

Deacon: I really feel energized by it and inspired and more deeply committed to the witness of women religious and the contributions we can make to live the Gospel today. You see so many faces of how religious life is being lived, and always in response to its own time and its own culture.

So, for me it's extremely affirming and it's very supportive. And just very inspirational.

You also had a moment Saturday where you were able to speak with the sisters about what was going on with LCWR and the Vatican's Congregation for the Doctrine of the Faith. What has been the most common thing international sisters have mentioned to you following that talk?

They're very happy that I explained the report to them -- let them know really what was in the doctrinal assessment. Because very often the media sensationalizes something or takes it out of context, so in some cultures they had just a very strange idea of women religious in the United States.

And they were very pleased to hear how we're responding -- affirmed LCWR over and over for their prayerful approach where they are discerning and are in dialogue respectfully. And overwhelming support for our approach and a real concern that it be worked out for the good of the whole church.

Sisters have come up to me -- just so many of them -- offering prayer and support.

When they offer that prayer and support -- the head of the Italian LCWR counterpart spoke right after your talk, offering you "solidarity" -- do you take that as a sign of solidarity for the dialogue process? How do you take that?

Well, she [Dominican Sr. M. Viviana Ballarin, head of the Union of Major Superiors of Italy] was very careful in her wording. She clearly said she was in solidarity with us as women religious and it was our role as women religious that she was affirming.

Is there something in the responses you've heard here or the feeling you've gotten that you didn't expect when you were coming here?

No. I mean, I knew there was misunderstanding of women religious, of American religious. But I've had the opportunity to be with women religious all over the world and I have found that once they get to know us, they appreciate and understand that we too are faithful women of the Gospel, but are living it out as our culture calls for it today.

When you say international sisters had a misunderstanding -- I know that you had said during your talk something about the way the Congregation had talked about LCWR needing to have the Eucharist at its assemblies -- is it things like that? Is it a misunderstanding of what you're doing?

There's often the idea -- when people look at us externally, they don't understand that we still pray together, we still live in community, we have many of the elements of a basic, historical religious life but we just live it differently.

They look at our clothing and they see it maybe as freedom rather than us getting in touch with the spirit of our foundresses, who often wore the clothing of the day.

It's a misunderstanding of how we're being faithful to our charism today. And once we explain that to them, or they experience us, they see us as faithful women committed to the Gospel.

I remember a sister saying, "American sisters pray." Yes, we do. Yes, we do. But they just have these strange ideas and I really don't know where they come from. Like I said, when they meet us they see us as committed to religious life.

When you hear that, what are you thinking? Are you seeing that there's a disconnect at the Vatican?

Speaking with other sisters after the cardinal came, many of them said they felt like he had been very personal, or even that he had a "big heart." How did you walk away from that?

That's valid. That was very clear. That was very, very clear -- that he is deeply pained by what happened. He wants it to work, he wants there to be dialogue. He wants us to trust each other and walk forward in the spirit of the Gospel.

The cardinal also mentioned -- saying he recognized that there was a lot of pain -- he thought it might be possible for you or the LCWR presidency to meet with the pope. What would be the main thing you would want to get across in such a meeting?

Is there a particular issue you would want to raise regarding the assessment or the mandate?

And he said very clearly -- I think almost in his first day, or shortly after he became pope -- he said, "Let's begin a journey of fraternity, love, and trust, bishop and people together."

And that's really what we're looking for -- a journey of fraternity, trust, and love, bishop and people together. And we'd like to expand that to bishops and people together, because we're hearing the call of a lot of Catholics that they want to walk with their bishops.

This meeting has really focused on servant leadership. In many of the speeches, there has been mention of questions of obedience, power, and authority. Bruna Costacurta spoke of how Esther used her power; this morning we heard about the "authority of the suffering." Is that raising any new thoughts for you about obedience, or about authority, or about structures of church power?

They're explaining them in a different focus, but I don't know that they're raising any new questions in my mind. But the imagery is beautiful. It's a way that I have perceived power an authority my whole life.

Vatican II was 50 years ago. These are Vatican II concepts. To me, they're not particularly new.

This morning, Sr. Martha Zechmeister mentioned that the final authority for religious rests with God.

I have to go back and reread Esther, because that was an eye-opener for me, in the sense of how she [Bruna Costacurta, a professor of biblical theology at Rome's Pontifical Gregorian University] used Esther as a symbol of scriptural authority.

The imagery has been new to me, and I do want to go back and look at that. But the Vatican Council talked about the Spirit among all of us. If the Spirit speaks among all of us or is in all of us, then authority is listening to others too.

So you listen to the will of God in a whole lot of ways. And listening to God through established authority. You look at it all those ways.

Yes, right. And then if you're hearing some different things from them there has to be some real discernment as to what does the Spirit seem to be calling you to -- what does God seem to be calling me to at this point, at this time? And then you make the best decision you can and you just leave it in God's hands.

In that vein, I'm wondering if that discernment of the different aspects of authority, if that's part of how you see dialogue. Because I know there's been a lot of talk of dialogue with the bishops, or now with Archbishop Sartain.

And with other people. And listening to what is God telling us in this situation. Yes.

You said in your talk that LCWR is really pursuing dialogue with the three U.S. bishops. Is that where that sits now?

We're meeting with them in a couple of weeks, the three of them together for a couple of hours -- several hours. We'll have a good chance to be together and dialogue.