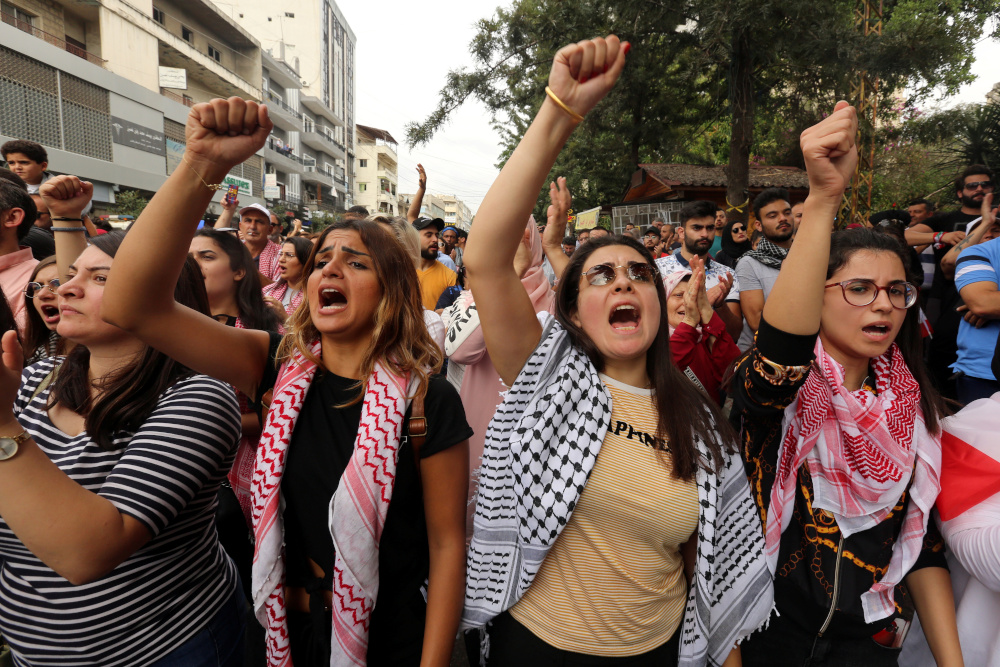 Demonstrators shout slogans during an anti-government protest in Nabatieh, Lebanon, Oct. 24, 2019. Amid a massive uprising of the Lebanese population demanding a sweeping overhaul of the country's political system, Christian leaders in Lebanon assured the people, "we hear your cry." (CNS/Reuters/Aziz Taher)

Amid an unprecedented, massive uprising of the Lebanese population demanding a sweeping overhaul of the country's political system, leaders of Catholic, Orthodox and evangelical churches in Lebanon assured the people, "We hear your cry."

In a statement following their emergency meeting Oct. 23 led by Cardinal Bechara Rai, Maronite patriarch, the Christian leaders said of the protesting Lebanese, "We express solidarity with their peaceful uprising."

"It is high time the state meets the just demands," the Christian leaders said. "We ask the head of state to immediately begin consultations with political leaders to take the necessary measures to meet the needs of the population."

Protests were triggered by proposed new taxes on top of a dire economic crisis and deteriorating living conditions, against a backdrop of political corruption. More than one-third of Lebanese citizens are below the poverty line, and the country's unemployment rate stands at nearly 40%.

"What Lebanon has been witnessing since Oct. 17 is a historic and exceptional popular uprising that calls for taking historic positions and exceptional measures. The painkillers do not suffice anymore. These people would not have risen if their pain had not reached their limit," said the church leaders, including patriarchs, bishops and heads of religious orders who met in the presence of the Vatican ambassador to Lebanon.

Void of any political party symbols, streets and public squares are awash in a sea of Lebanese flags as hundreds of thousands of Christians, Muslims and Druze have peacefully gathered throughout the country.

"The people have sent a message that transcends sectarian divisions," the statement said, adding that Lebanese "have shown that they were more united than their leaders and gave evidence of the will of national life in a time of disintegration."

The Christian religious leaders charged that "successive governments for 30 years ignored our appeals and neglected their axiomatic duties."

"We assure you that your uprising will remain in your hearts until you achieve reform," the Christian leaders told the Lebanese people, urging them to keep their gatherings peaceful and to avoid being misled or manipulated.

Reforms announced by Lebanese Prime Minister Saad Hariri Oct. 21 in response to the protests are "a positive first step, but a reshuffle of the government and the start of an administration run by competent and patriotic people" is needed, the Christian leaders said.

They asked the government to respond to national demands, including: a credible, democratic government; an independent and just judiciary; and transparency. The Christian leaders also demanded the government fight corruption, stop waste and, with effective laws, recover plundered money as well as to provide education, job opportunities and social services to the people.

"These are the most basic rights," the Christian religious leaders said.

The uprising, they said, is "an additional proof to the world to realize once again that the people of Lebanon deserve a free and democratic life, sovereignty and independence" as well as stability and prosperity.

"We call upon the international community, near and far, to support Lebanon as a people and a nation, to remain the beacon of this East and the homeland of a 'message' as described by Pope John Paul II."

They also asked the international community "to play its part in supporting the first democracy that has emerged in this East" and in preserving "the first experience of a Christian-Muslim partnership that emerged after World War I."

The religious leaders appealed to the world to help Lebanon solve problems resulting from the wars in the region and in "the strict implementation of all international resolutions."

Under Lebanon's power-sharing system, the presidency is reserved for a Maronite Catholic, while the prime minister is a Sunni Muslim and the speaker of parliament is a Shiite Muslim. About 40% of Lebanon's citizens are Christian.