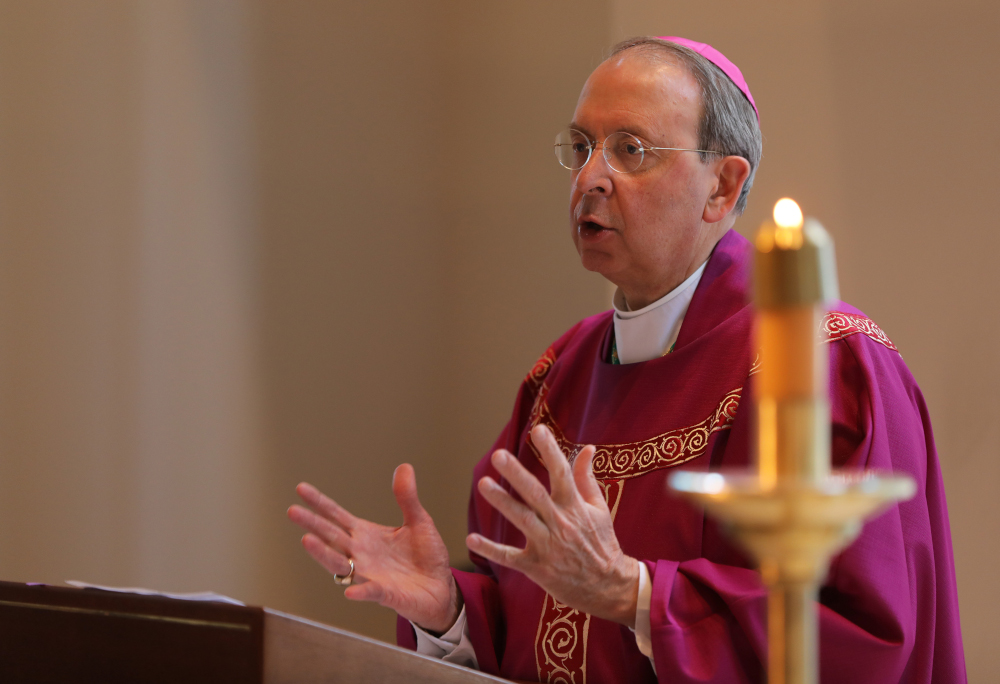 Baltimore Archbishop William Lori delivers the homily as he celebrates a Mass with special intentions for survivors of abuse and for abuse prevention in the chapel of the headquarters of the U.S. Conference of Catholic Bishops in Washington April 8, 2019. (CNS/Bob Roller)

A week into National Child Abuse Protection Month, Baltimore Archbishop William Lori visited the U.S. Conference of Catholic Bishops chapel April 8 to celebrate midday Mass for conference employees and reflect on the church's work to develop policies and procedures to prevent child abuse by those within the church.

He recognized that those who work at U.S. bishops' conference headquarters have a keen desire "to do everything possible to address on an ongoing basis the sexual abuse crisis that has roiled the Catholic Church for such a very long time."

The "Charter for the Protection of Children and Young People" and the related "Essential Norms" implementing the charter legislatively passed by the U.S. bishops in 2002 were "a major step forward," the archbishop said. "Nevertheless, all of us admit that much more still needs to be done, especially in the areas of episcopal transparency and accountability."

"There are many motivations for wanting to get this right," he said at the Mass.

First of those are the desire to see that all children and young people are safe.

Second, he said that as a bishop, he naturally wants to see confidence in the church restored in the Archdiocese of Baltimore and globally.

The church was hit by revelations last summer that included allegations against Theodore McCarrick, a former cardinal and retired archbishop of Washington, and the release of a report from the Pennsylvania attorney general detailing hundreds of allegations of abuse over a 70-year period beginning in 1947.

Such revelations call into question the church's essential mission of evangelization, the archbishop said.

"More than anything else, however, our hearts should be broken, humbled, contrite, by the horrific experiences of those who have been sexually abused by clergy or by other representatives of the church," Lori said. "Even if such abuse was committed many years ago, the wounds inflicted upon innocent children and young people are often lifelong wounds. Far too many do not find justice and healing; far too few have their peace."

He reflected on the day's reading from the Book of Daniel in which Susanna is falsely accused of adultery, a sin punishable by death, by two elders who were thought to be pillars of the community but had made "traumatic sexual advances" against Susanna. "They laid blame on others, ultimately the victim herself," the archbishop said.

He said Susanna stands as "an image of victim-survivors who have felt trapped both by the sexual abuse they suffered and by the unavailability of justice that compounded their suffering. Her story highlights what goes wrong when perpetrators and self-interested parties – without any apparent oversight – act as the sole purveyors of justice. 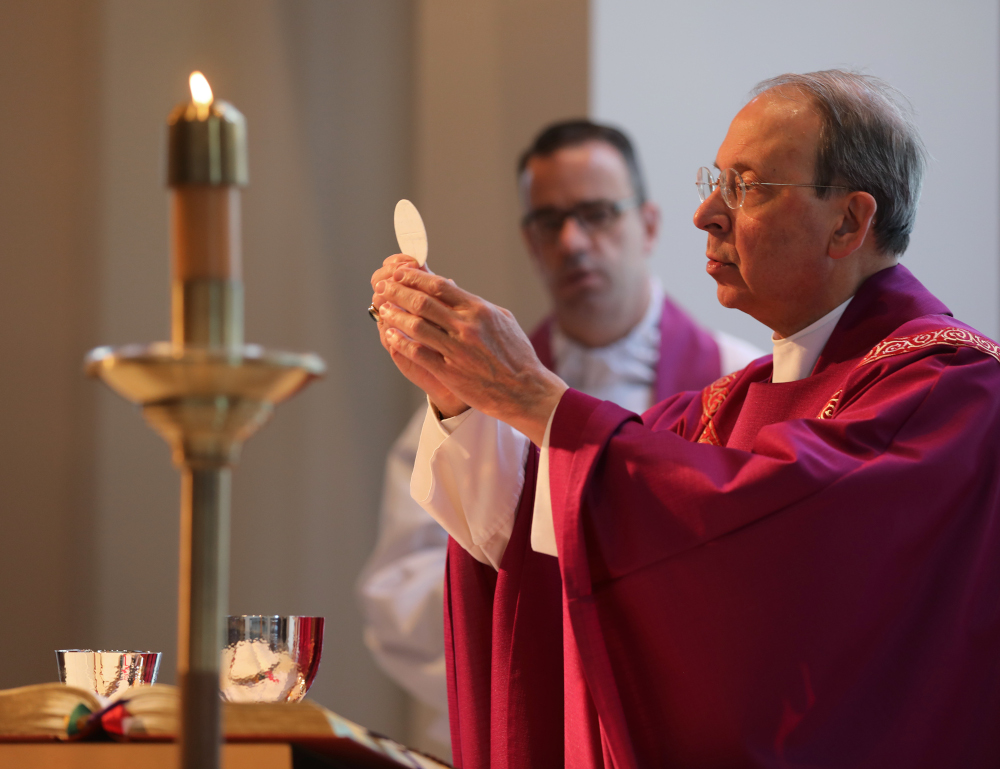 Baltimore Archbishop William Lori celebrates a Mass with special intentions for survivors of abuse and for abuse prevention in the chapel of the headquarters of the U.S. Conference of Catholic Bishops in Washington April 8, 2019. Looking on is Msgr. J. Brian Bransfield, general secretary of the conference. (CNS/Bob Roller)

"Tragically this happened in the church, often at the hands of bishops and priests, even as it also has happened in families and public institutions," Lori said. "If these days of reckoning mean anything, they should signal on our part a newfound determination to listen to victim-survivors; to provide them justice; to offer them ongoing assistance; to proceed transparently and, for their sake and for the sake of others who have been or will be victimized, to do all that God's grace and human ingenuity make possible in preventing this egregious sin and heinous crime."

Reflecting on the psalm as well as the Gospel reading from John in which Jesus tells the people, "I am the light of the world. Whoever follows me will not walk in darkness, but will have the light of life," the archbishop said followers of Jesus will not walk in the darkness of sin. In the context of addressing sexual abuse, this means abandoning the culture of secrecy and clerical privilege.

"Let us therefore not allow the words 'transparency' and 'accountability' to become mere slogans, mere shorthand for policies and procedures – good, important, and necessary as these truly are. 'Transparency' and 'accountability' ought to mean that all we say and do in the name of Christ and the church must be done in the light, under the gaze of 'the Father of lights in whom there is no shadow,'" he said.

In the prayers of the faithful, the congregation prayed "that God may grant survivors of abuse the courage to tell their stories and seek healing" and "that Catholics scandalized by the current crisis would remain rooted in the body of Christ and the sacraments."

Afterward, Massgoers were encouraged to stop in the corridor of the bishops' conference building to "plant" a blue pinwheel in a pot as a symbol of the innocence of children. The Prevent Child Abuse America organization instituted the "Pinwheels for Prevention" campaign in 2008.

"By its very nature, the pinwheel connotes whimsy and childlike notions," the organization's website says. "In essence, it has come to serve as the physical embodiment, or reminder, of the great childhoods we want for all children."

While he was at the bishops' conference, Lori also participated in a podcast for the bishops' Secretariat for Child and Youth Protection with Deacon Bernie Nojadera, secretariat director.

Nojadera, who assisted at the Mass, asked what makes this time of dealing with child sexual abuse in the church different from 2002, when the bishops implemented the charter and norms. 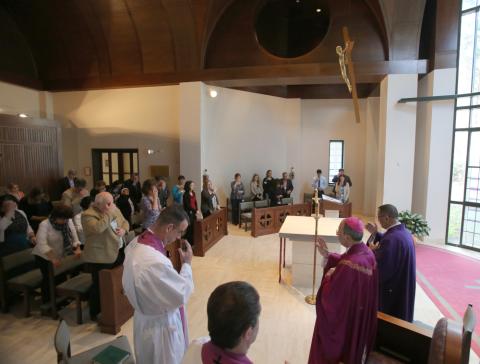 Baltimore Archbishop William Lori gives the final blessing after celebrating a Mass with special intentions for survivors of abuse and for abuse prevention in the chapel the headquarters of the U.S. Conference of Catholic Bishops in Washington April 8, 2019. At left is Msgr. J. Brian Bransfield, general secretary of the conference, and far right, Deacon Bernie Nojadera, executive director of the bishops' Secretariat for Child and Youth Protection. (CNS/Bob Roller)

The archbishop, who was ordained a priest in 1977 and became an auxiliary bishop for the Archdiocese of Washington in 1995, said the bishops' conference tried to deal with the abuse in the late 1980s, followed by proposed policies in the early 1990s, although those policies were not mandatory.

Passage of the charter and norms in 2002 was a landmark event that signaled that abuse would not be tolerated, he said in the podcast.

Nojadera said that when some people contend that the charter has not worked, he points out that the charter and the processes that are part of it do work in requiring allegations to be investigated by civil authorities and local independent review boards.

Lori said that bishops were not included in the charter, not because they were above the law, but that discipline of bishops was outside the scope of the conference and that the bishops believed the Vatican would address such allegations.

"That was a decision that was not sound," he told Nojadera of not including bishops specifically in the charter.

In June, the U.S. bishops' conference is expected to address the establishment of policies related to allegations against bishops who are accused of misconduct with a child, other sexual harassment, or of negligently or incorrectly handling allegations of abuse within their dioceses.

The Archdiocese of Baltimore in January instituted a policy and process by which allegations against bishops in the archdiocese will be handled by two retired judges who are members of the Independent Review Board.

Lori said in the podcast that a number of things can be done to improve the church's response to abuse. "We can't let one iota of complacency set in."