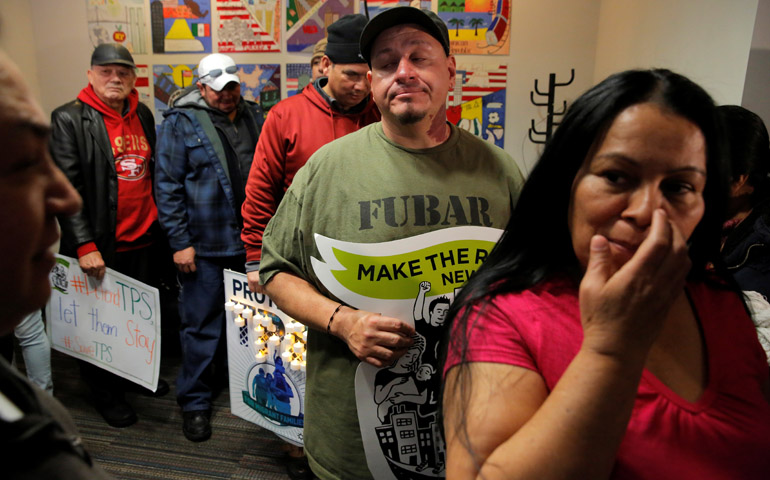 If Rosa Bonilla could visit face-to-face with President Donald Trump, she would plead, "Please do not separate more families" of U.S. immigrants.

"First and foremost," the mother of three said, "I would emphasize how much we want and need comprehensive and just immigration reform."

"The announcement that TPS would be cut in a year and some months has been like torture for us and our families. We are counting the days with a tremendous amount of stress and anxiousness and pain."
—Rosa Bonilla

The already complex, confusing and challenging lives of Salvadorans residing in the U.S. became exponentially more so on Jan. 8 when the Department of Homeland Security announced that temporary protected status (known as TPS) for them will end Sept. 9, 2019.

Temporary protected status has allowed its holders to reside, work and travel in the U.S. They have been required to renew their status and pay a $500 fee every 18 months.

"The announcement that TPS would be cut in a year and some months has been like torture for us and our families," Bonilla said. "We are counting the days with a tremendous amount of stress and anxiousness and pain."

"There is much tension all around about what might happen. Everyone is scared of the future," she continued.

One of nine children, Bonilla has five siblings living in the Los Angeles area along with their children and grandchildren. All but one of her L.A. area* siblings has temporary protected status, as do a half dozen cousins and many friends.

For example, her older sister received temporary protected status years ago as did, over time, nearly a quarter million of her El Salvadoran countrymen, after two major earthquakes and accompanying mudslides devastated the country in January and February of 2001.

To qualify for TPS, however, Salvadorans had to prove continued residency in the U.S. since Feb. 13, 2001.

The children of Rosa's sister, however, who were born in El Salvador and live in Los Angeles, do not have temporary protected status. On paper, they live in the U.S. illegally.

Those children's U.S.-born children, though, are U.S. citizens as are an estimated 193,000 other American-born children of temporary protected status parents since 2001, reported the Los Angeles archdiocesan news outlet, Angelus.

A pastoral assistant at Dolores Mission Parish in East Los Angeles' Boyle Heights neighborhood, Bonilla said there is a scramble to learn the ins and outs of the temporary protected status termination, and what legal alternatives might exist.

While many "are looking to find legal consultation," she said through an interpreter, "at the same time they run the risk of being defrauded."

Immigration fraud is "very prevalent," she explained. "I tell people to be very, very careful who they consult."

Fortunately, she and others underscored, the Loyola Immigrant Justice Clinic is helping as many as its staff can with residency and other legal issues. Operating out of Dolores Mission one day a week, the clinic is a collaboration of Loyola Marymount University, its law school, Homeboy Industries and the parish.

"Many are also very vulnerable," Bonilla added, "because they do not speak English, or speak poor English."

Catholic Charities of Los Angeles has also been active in providing general background material on the protected status situation. In a Jan. 18 media release, it stated it "will offer … information sessions, provide financial assistance to those eligible to naturalize, and provide legal guidance to those losing their immigration status."

In a Jan. 25 statement, the archdiocese urged temporary protected status recipients to apply for renewal "as soon as possible" to maintain legal residency status at least for the time being.

"While the end of TPS is difficult for our immigrant community, it's important that we continue to pray for a solution and the possibility of permanent legal status," said Isaac Cuevas, associate director of the Archdiocese's Office of Immigration Affairs, in the release.

It is estimated that as many as 1 million permanent immigrant residents of the Los Angeles metropolitan area are eligible for citizenship, but financial and seemingly labyrinth procedures discourage applications. Many also fear that initiating a process might red-flag them or their families for scrutiny by Immigration and Customs Enforcement, the Department of Homeland Security, or other law enforcement agencies.

The Jan. 8 announcement by Homeland Security Secretary Kirstjen Nielsen stated that "the original conditions caused by the 2001 earthquakes no longer exist" in El Salvador and, "Thus, under the applicable statute, the current TPS designation must be terminated."

Salvadorans in the U.S. and immigration rights activists counter that crime, corruption, drug cartels and poverty plague El Salvador. As evidence of El Salvadoran instability, activists point to the tens of thousands of undocumented adolescents and children who have arrived at the U.S. border, fleeing gang violence and poverty.

The DHS explanation, however, said that "in recent years the U.S. government has been repatriating individuals back to El Salvador — more than 39,000 in the last two years — demonstrating that the temporary inability of El Salvador to adequately return their nationals after the earthquake has been addressed."

Ironically, one of Los Angeles' leading exports to Central America, notably El Salvador, has been gang culture and violence, according to NCR sources, law enforcement and social scientists.

"There is lots of violence and hardly any jobs in my country," Bonilla confirmed. "There is no opportunity to go to college. There is a lot of violence, a lot of gang violence. There is no hope to be able to live life with dignity in El Salvador." 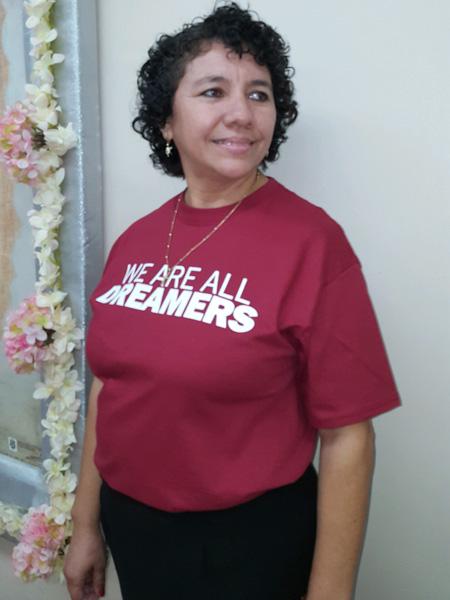 Interestingly, Bonilla herself is a U.S. citizen, having become one through what at times seem to be arbitrary, domino-like events. Her mother-in-law had received amnesty to enter the U.S. during the Reagan Administration (1981-89) when civil war raged in El Salvador. Through her, her son was able to become a citizen. Through him, in turn, Rosa and their children entered the U.S. with a path toward citizenship.

As a result, friends and family often say to her, "If anything happens to me, please take care of my children."

Her older sister, Bonilla said, currently plans to return to El Salvador "with a broken heart" when Salvadoran temporary protected status expires. Her sister's children, however, and many Salvadorans Bonilla knows who will lose protected status, "plan on staying, regardless, as long as they can, until they get them and deport them."

Bonilla said a kind of malaise has settled on much of the Salvadoran community.

"My sister is worried all the time," said Bonilla, "and she has gotten sick. She worries about her children when they leave. She wonders what might happen to them. Will they make it home?"

"I don't just worry about my family, but I also worry deeply about our community," Bonilla added, pointing to "the pain and the fear that the people in our community are feeling right now, anybody who has TPS."

Noting that she and many Salvadorans now in the U.S. "grew up in very poor families," she remembers "when they gave us TPS. It was a great joy for everyone in my family because we began to be able to look for different jobs, better jobs, greater opportunities."

"For me as a layperson and a Catholic and someone very involved in the church, it is very important for me to hear from our church leaders — that they care about immigrants and want to support us."
—Rosa Bonilla

That, in turn, she predicted, will often lead to "unjust wages and exploitation" as Salvadoran workers seek to slip under labor law radar. Wages will drop and benefits will disappear, she said, and countless employers will be forced to replace key, long-term employees.

"Some employers are already asking, 'What are you going to do?' " of friends and relatives, Bonilla said.

Active in several ministries for a number of years as a volunteer before becoming a staff member at Dolores Mission in 2013, Bonilla said she appreciates the outspoken support for Hispanic/Latino immigrants and others by Los Angeles Archbishop José Gomez, Pope Francis and other church leaders.

"For me as a layperson and a Catholic and someone very involved in the church, it is very important for me to hear from our church leaders — that they care about immigrants and want to support us," Bonilla said.

However, "No one from the Department of Homeland Security has reached out to our office for any kind of effort" for consultation, wrote Cuevas, the Los Angeles Archdiocese's associate director of immigration affairs, in an email to NCR.

"We did organize a campaign together with the (Los Angeles) consulate of El Salvador when the news of ending TPS was made, and there was no mention during any of our planning or informational sessions about this kind of outreach from DHS with the consulate," he said.

The DHS release clearly shifted any responsibility for any reprieve or relief for the protected status elimination to lawmakers.

"Only Congress can legislate a permanent solution addressing the lack of an enduring lawful immigration status of those currently protected by TPS who have lived and worked in the United States for many years," it stated. "The 18-month delayed termination will allow Congress time to craft a potential legislative solution."

As of Feb. 12, a DHS spokesperson had not responded to questions about potential extension of the temporary protected status termination deadline or requests for documentation and details on its consultation process.

"I just want people to know about how important it is to be united as an immigrant community, as a Latino community — to support each other in this difficult time, to support each other as a Christian community, but also as immigrants. We need to work together," Bonilla said. "We are all children of God, and so the pain that somebody is feeling who doesn't have documents, is our pain, too."

*This story has been updated to clarify a sentence about Bonilla's siblings.