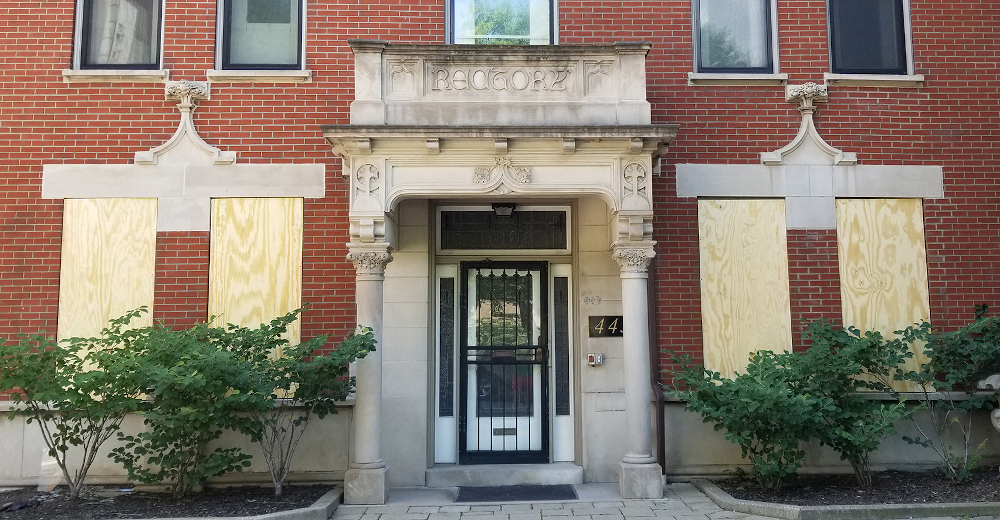 Windows of the Cathedral of the Assumption's rectory in Louisville, Ky., are seen May 30, 2020. They were boarded up with plywood after several were broken amid an anti-police protest that began the day before. (CNS/The Record/Marnie McAllister)

Windows of the Cathedral of the Assumption and its offices facing South Fifth Street in downtown Louisville were covered with plywood as a precaution May 30 after a second day of peaceful protests turned to violence and vandalism overnight.

Protesters broke three windows in the cathedral rectory — where Archbishop Joseph E. Kurtz and Fr. Michael Wimsatt, pastor, reside — at about midnight during a May 29 demonstration that began peacefully that afternoon. Those windows also were covered with plywood.

In a May 29 letter to Louisville Mayor Greg Fischer, Kurtz expressed his support of peaceful protests "that give voice to the pain of the community and to the desire for truth and justice to be served."

He also said he lamented the "senseless violence" that developed overnight after peaceful protests had drawn hundreds to downtown Louisville May 28.

Louisville protesters joined demonstrators in major cities around the country demanding justice for victims of police violence and racism May 28 and 29. They chanted "No justice, no peace" as they made their way through the streets of the downtown area, stopping periodically to chant and block intersections.

In New York City, protesters sprayed graffiti on a portion of two walls and a step at St. Patrick's Cathedral, according to the New York Post in an evening story May 30.

During the May 28 protest in Louisville, shots were fired by a person or persons in the crowd and seven people were wounded, according to the Louisville Metro Police Department. And three protesters were arrested after windows at Metro Department of Corrections properties were broken, according to local news reports.

As protests resumed the afternoon of May 29, local leaders called for them to remain peaceful. Late that night and into the early hours of the morning, police in riot gear fogged protesters with tear gas and demonstrators shattered windows of downtown buildings — including the cathedral's rectory — and looted area stores. Six protesters were arrested and six officers were injured, according to the Louisville Metro Police Department.

The protests were sparked by the deaths of Louisville emergency medical worker Breonna Taylor and George Floyd of Minneapolis.

A white police officer in Minneapolis has been arrested and charged with third-degree murder manslaughter after being captured on video on Memorial Day kneeling on the neck of George Floyd, an African American, who was arrested on suspicion of forgery, Floyd was pinned to the ground as the officer knelt on his neck for eight minutes. Floyd struggles to say, "I can't breathe," repeatedly and eventually appears to lose consciousness or die. He was declared dead at a hospital afterward.

Breonna Taylor, 26, was shot to death March 13 by Louisville Metro Police when officers entered her home in plain clothes on a "no-knock warrant," meaning they could enter her home without identifying themselves or knocking. Thinking they were being robbed, Taylor's boyfriend, Kenneth Walker, fired at the officers, The Associated Press reported. Taylor, who was African American, was shot eight times. The FBI is investigating.

In response to protests, Louisville Mayor Fischer announced he will temporarily suspend no-knock warrants. The Metro Louisville chief of police has announced his retirement in the wake of the Breonna Taylor shooting.

On May 30, the mayor called for a curfew in Jefferson County from 9 p.m. to 6:30 a.m. He also has called in the Kentucky National Guard. In consultation with the mayor's office, the Cathedral of the Assumption canceled the Saturday evening Mass for May 30, said Brian B. Reynolds, chancellor and chief administrative officer of the Archdiocese of Louisville.

Reynolds said he has been in touch with pastors in affected neighborhoods and noted, "Churches are considering the best ways to respond to the pastoral needs of their communities."

He added that the archbishop's May 29 message to the mayor remains unchanged:

"Our fellow citizens are suffering and distraught and everyone is on edge due to many factors that have been exacerbated by the COVID-19 virus," Kurtz said in his letter to the mayor. "The hope promised by our faith is that the crosses we bear can have a transformative effect as we seek, with God's grace, to build a better future for all."

"I stand with you as we all work to build a better Louisville in which all citizens thrive and in which there is a shared commitment to the common good."

The letter concluded, "I can assure you that the parishes and faithful of the archdiocese will be praying for you and for a peaceful and just resolution to this situation."

Elsewhere, the archbishop of Atlanta in a May 29 statement decried Floyd's death and the fatal shooting of Ahmaud Aubrey, 26, in Georgia Feb. 25. He also was an African American and three white men were arrested and face murder charges in his death.

"The sin of racism continues to haunt America," Archbishop Gregory J. Hartmayer said. "In the past month, we have watched two black men die — one of them (Floyd) as he begged for his life. We wake this morning to face the outpouring of grief and rage over the latest manifestations of racism in America. In Atlanta, the birthplace of Dr. Martin Luther King Jr., that anger boiled over last night into violence and destruction."

More destruction followed the night of May 29 as hundreds poured into the streets of downtown Atlanta. There was widespread vandalism and property damage, including windows smashed at CNN's headquarters, and demonstrators clashed with police officers. Protests the next night brought at least 150 arrests.

"I call on our Catholic community in Georgia to come together this Pentecost weekend and beyond," Hartmayer said in his statement. "Let us seek out true justice. Let us encounter our neighbors in love and let us join in prayer and work for an end to racism. In the words of Pope St. Paul VI, 'If you want peace, work for justice.'"