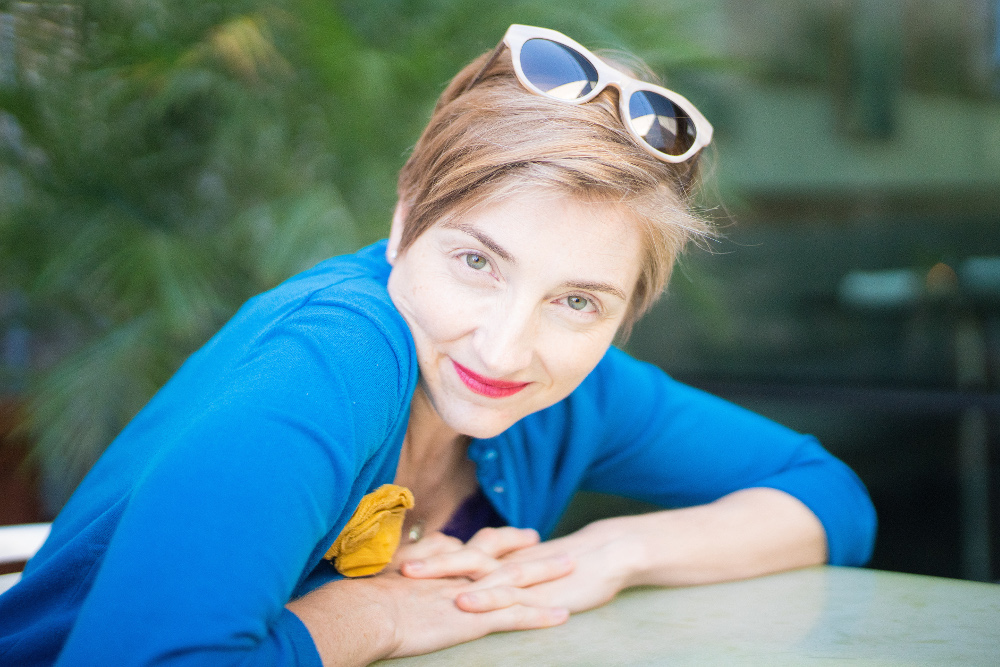 It has been an excruciatingly painful day for "Madam Secretary" and her staff. A plot to negotiate the release of a kidnapped American aid worker fails, and the young woman — together with others who have been trafficked — is found dead from asphyxiation in the back of a truck in Kyrgyzstan.

In the final scene of the episode of the CBS drama, as Secretary of State Elizabeth McCord (played by Téa Leoni) tries to console distraught staff members in the wake of this unspeakable evil, the senior policy adviser shares part of a poem by Maggie Smith:

Life is short and the world

is at least half terrible, and for

stranger, there is one who would

though I keep this from my

children. I am trying

to sell them the world. Any

walking you through a real

about good bones: This place

right? You could make this place

It's a moment of grace, created by Catholic screenwriter and co-executive producer Joy Gregory, who believes the divine speaks through poetry and who has made it her mission to bring stories about "tangling with the big questions" to television.

"I like to 'sneak the vegetables in' without people knowing about it," Gregory told NCR, referring to how she works in storylines of redemption, spiritual struggle and even overt references to faith as a television writer and producer.

That has been easier in her last two jobs on "Madam Secretary" and the teen fantasy drama "Joan of Arcadia" — both created by executive producer Barbara Hall, known for addressing faith on TV.

Before that, Gregory often faced resistance in writers' rooms full of "secular progressives," most of whom are not religious.

"It's a shocking blind spot in people who preach and practice tolerance in many areas of their lives," she told a group of religion journalists in January.

But television writers can't hit audiences over the head with proselytizing either, Gregory said.

"Religion too often doesn't work well on TV because it's either preaching to a choir, or it's trying to reach people who have already decided, 'That's not me,' " she said. "People don't want to go deep. It's not cool; they might 'catch it.' "

Instead of the overt approach, Hall and Gregory try to "throw a bigger party" to attract audiences with compelling spiritual, or even religious, stories. They were successful on "Joan of Arcadia," in which a teenage girl had unexpected conversations with God, who was disguised as everyday people.

That show, which originally aired on CBS from 2003 to 2005, was Gregory's favorite, since it was "entirely about arguing with God," she said.

Gregory has also argued with God for much of her life and admits her questioning nature has led her to identify with Jacob wrestling with the angel in Genesis.

She grew up in a blue-collar, Polish family in Cleveland, the daughter of a steelworker father who later worked for General Electric. The family attended St. Leo the Great Parish, where she made her first Communion and was confirmed.

Confirmation was, for her, a ritual of owning her spirituality, she recalled. "It shaped my moral code and how I wanted to move in the world."

Her calling to be an artist was confirmed while a student at Cleveland's School of the Arts. But when Gregory went to Northwestern University in Evanston, Illinois, she found herself overwhelmed by the academic demands and challenged by the secular liberal thinking of most her professors.

In retrospect, Gregory realizes she walked away from her faith because she saw Catholicism as "anti-intellectual."

"My feminism and my burgeoning intellectualism didn't jive with my Catholic upbringing," she said. "My understanding of my Catholic faith was more like a childlike surrender. I hadn't engaged with the Jesuit tradition of questioning and thinking. That wasn't part of my experience of Catholicism growing up."

The move toward integrating her Catholicism, her intellectualism and her art began when she wrote her first play, as a founding ensemble member of the Lookingglass Theatre in Chicago. 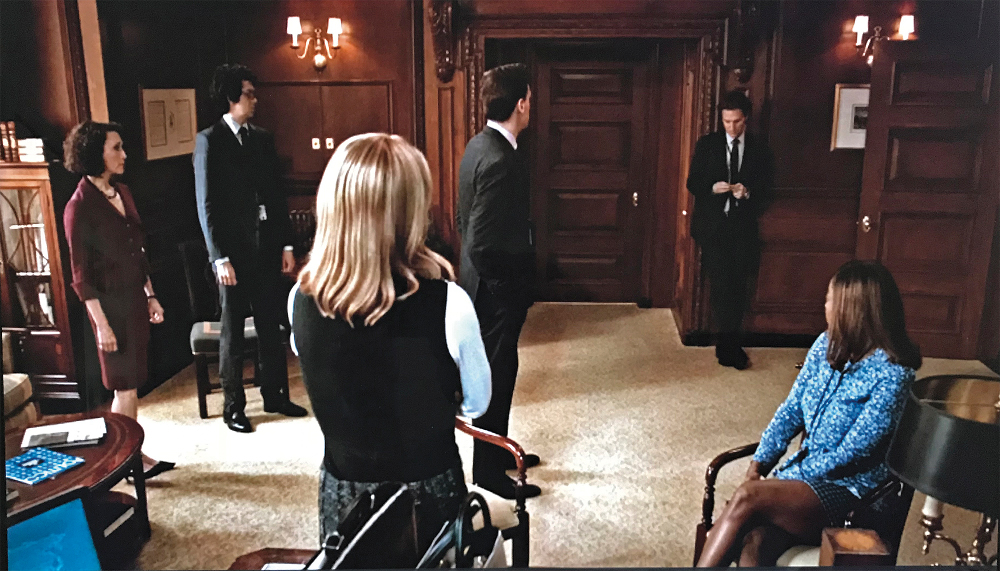 A scene from "Madam Secretary," the episode "Good Bones," in which Jay Whitman (Sebastian Arcelus ) shares part of a poem by Maggie Smith (Screenshot/NCR photo/Toni-Ann Ortiz)

"All Souls Day" was about the tension between the interior and exterior aspects of spirituality, as told through the stories of St. Catherine of Siena and St. Thérèse of Lisieux. What Gregory initially thought would be an "ironic, feminist" take on the two saints instead turned out to be a heroic portrayal.

Surprised by how her Catholic sensibilities had seeped into the script, Gregory now sees that writing "All Souls Day" helped her find her voice as an artist — and to rediscover her faith in a more adult way.

But, in her late 20s, Gregory was facing a bit of a vocational crisis, exhausted by her work in the theater and as co-frontwoman to a band called Tart, while working as a second-grade teacher's aide during the day. "It was all incredibly fulfilling and creative, but I was incredibly poor," she recalled.

She decided to go to graduate school, at California Institute of the Arts just north of Los Angeles, where she studied writing in the Department of Critical Studies, which prepared her for what she thought would be a career in academia.

But a screenwriter friend from a women's writing group suggested she work with her on a few "spec" episodes for "Felicity," a WB network show about a young woman finding herself. In what Gregory calls "the luckiest stroke of my life," the two were hired as staff writers.

Although some colleagues from graduate school looked condescendingly on her new career, Gregory knew that writing for television would give her a wide influence in bringing Christian and spiritual themes to her storytelling.

That, however, was a bit of an uphill battle until she began working with Hall, the Catholic convert who created "Joan of Arcadia" and, later, the character of Henry McCord (played by Tim Daly), Madam Secretary's husband, a Catholic theology professor and spy on the side.

Hall said Gregory's interest and curiosity about religion and spirituality is an asset to "Madam Secretary."

"She makes herself a student of any religious or spiritual story we tell and like any good student, makes it a point to understand all perspectives," Hall said to NCR in an email interview. "She's also a great humanitarian and her commitment to social justice is something she practices assiduously."

Season 2's episode "Waiting for Taleju," written by Gregory, was nominated for a Humanitas Prize, which honors film and television writers whose work promotes human dignity, meaning and freedom.

Although the writers use consultants to get the political and religious details right, Gregory has made contributions to many of Henry's spiritual storylines. The first episode she worked on, "The Time is at Hand" in Season 1, includes a "deep dive into Henry's Catholicism as both a scholar and a sometimes struggling believer," Gregory said.

In the episode, Henry is trying to defuse a possible mass suicide with a leader of a Christian cult, so Gregory wrote a scene in which he tells a formative story from his youth. After his best friend fell in a frozen pond and died, Henry found he couldn't ring the bells during the consecration while serving as an altar boy that following Sunday. The priest tells him after Mass that it's OK: "God goes quiet on us all."

That honest admission of struggle with faith hooks Henry both intellectually and spiritually — as similar approaches to the spiritual life have for Gregory. "It's those contradictions, the 'wrestling with angels,' that I'm drawn to in my own journey with faith," she said.

Especially during these polarized times, Gregory sees her mission as helping to move the rhetoric toward mutual acceptance and understanding — whether through political activism or through her writing.

"I feel like we are absolutely in an emergency, a state of crisis," she said. "I feel this is a fight for the soul of our country."

Now the parent of a teenage daughter, Gregory at least tries to counter the "religion is not cool" message that she received in her adolescence. "We talk about what it means to live a good life and I try to educate her about the Christian tradition," she said.

She admits that she is not a weekly Massgoer, though "still enough of a Catholic to confess to you that I feel guilty about that."

Her current projects include pitching an idea about a failed evangelical television host who makes a spiritual and commercial comeback, and a pilot about a woman who was part of the radical underground in the 1970s who is forced to deal with her past.

Stories about "women trying to figure it out" and about redemption will always be her favorite, she said.

As for the title character of "Madam Secretary," although married to a Catholic, her own religion has not yet been part of the storyline. "But," said Gregory, "never say never."

A version of this story appeared in the June 29-July 12, 2018 print issue under the headline: 'Madam Secretary' writer seeks to bring faith to TV.