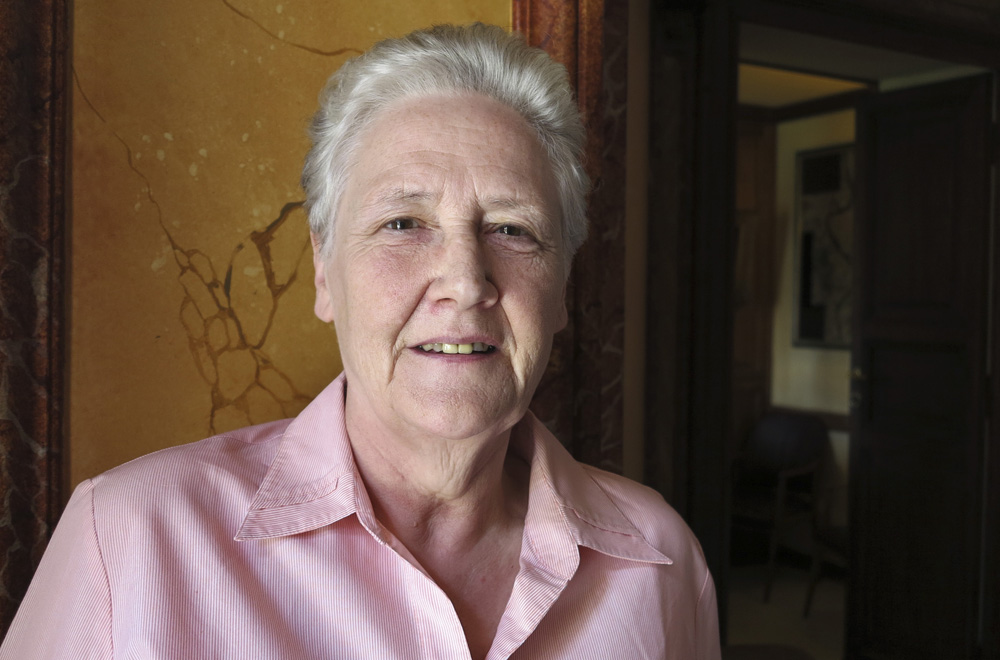 Although Irish abuse survivor Marie Collins praises Pope Francis for candidly admitting in his recent letter to Catholics around the world that the church covered-up clergy sexual abuse for decades, she says the letter is missing "the most important thing:" a plan to hold the perpetrators of the cover-up to account.

In an NCR interview Aug. 21, the former member of Francis' papal commission on clergy sexual abuse said that while she believes the pontiff has good intentions in fighting abuse she is looking for actions to back up those intentions.

"Whether your intentions are good or not, what really matters is what you do," said Collins, who resigned in frustration from the Pontifical Commission for the Protection of Minors in 2017. "History will judge Pope Francis on his actions, not his intentions."

The Irishwoman said Francis' Aug. 20 letter, in which the pontiff admitted the church "did not act in a timely matter" to protect children from sexually abusive clergy, "falls down" by not offering concrete plans for action going forward.

"You can keep saying how terrible this is," she said. "And everybody knows that now. What we want to know is what are you going to do about it. And that's what we still haven't got."

NCR: How do you evaluate the pope's Aug. 20 letter overall?

Collins: On the positive side, the fact that he speaks about cover-up as a fact is important. And I hope at this point that the deniers and those in the laity who still are trying to deny that there has been systemic cover-up will now cease and desist with that, because for 20 years those of us who have been speaking about this have been called liars.

We don't need the pope to confirm that there's been a systemic cover-up by church leaders but hopefully those who are still talking about this as some sort of media campaign or "enemies of the church" or "angry survivors" will now accept that this is a reality and it has to be dealt with.

The pope saying what he has said and actually using the word cover-up more than once in the letter is stating it basically now to every Catholic in the world as a fact. That is certainly important to me.

One of the strongest points was the statement that the church had "abandoned" children. How did you hear that in the letter?

All the strong words that the pope used in the letter about the atrocities and abandoning the little ones — they are all true and important and meaningful. It's good to see the pope saying these sorts of things in such clear language. There are no euphemisms. It's very strong and it's very clear.

But all that being said, I've got to say that the letter tells us nothing about what he's going to do about it. And this has been the problem with all the letters and the words we've had in the past. We had the same thing from Pope Benedict when he wrote to the Irish people in 2010. Though not in such clear language, the promises to do something about it were there. And we're so many years on and still haven't seen anything.

In this letter, the pope is talking about looking for means to hold not only the perpetrators accountable but those who cover-up for them or protect them. He's looking for means to hold them accountable. Well, what bothers me is that the commission gave him the means — the accountability tribunal — and he approved it, three years ago. Why is there still this searching for some way of holding leaders accountable when he already has that on his desk?

"You can keep saying how terrible this is. And everybody knows that now. What we want to know is what are you going to do about it. And that's what we still haven't got."
—Marie Collins

I think my reaction in the overall is yes, I'm positive about some parts of the letter. But that one thing that's missing is the most important thing. It's the fact that there's nothing concrete there saying: "This is what we're going to do. I'm going to remove any bishop that does this. I'm going to hold them to account. I'm going to do it in this way."

That's not there. And if that does not happen and if he does not announce that — how he's going to do it — in the very near future, this letter is just going to end up with all the other statements from the past as just more words. That is the problem. And I think it's probably the reaction of most survivors that really the rest of the letter, while it is a move forward from past statements, it really falls down on the fact that there's no concrete plan about it.

You can keep saying how terrible this is. And everybody knows that now. What we want to know is what are you going to do about it. And that's what we still haven't got.

You said during an Aug. 17 interview with NPR's Morning Edition that you thought the pope's intentions were good, but the problem was what he is doing with that. Is there a point at which it just doesn't matter what his intentions are? Is there going to be a point of no return?

I think there has to be. Whether your intentions are good or not, what really matters is what you do. That's the problem. History will judge Pope Francis on his actions, not his intentions.

The letter again shows a lot about his feelings — his strong feelings come through about anyone who would abuse a child, or the church "abandoning the little ones." He obviously is passionate about it. But he must translate that into action. And he must not allow anyone around him to deter him from that.

This is the problem. And that was the problem when I was on the commission. It was fine that he was approving recommendations but that they never happened and they were never implemented made that meaningless. Having his approval was no use. The things had to be put into action.

That is what is not happening. And he talks about the delay in doing it. Decades are passing. And every day that passes, more children are being abused and harmed. It's not just about holding church leaders accountable for covering up. It's putting proper safeguarding procedures in place, solid ones. And that suggestion by BishopAccountability.org that zero tolerance should be written into canon law, I agree with that absolutely.

We have seen one country after another showing that this is not an English-speaking or Western problem. It's not going to go away. More and more countries will be coming forward and they need to be proactive, not reactive. They just constantly keep fire fighting when something comes up, like Chile and now in America.

It's got to be something that's done which will have an effect in the global church. Leaving it to local bishops is no good because many local bishops don't think it's a problem and don't think they need to worry about it.

The fact that this letter comes out so close to the trip to Ireland, does it change anything? How do you think about this letter in that context?

Anyone who's here for the visit can see the anger here in Ireland, how alive this issue is and how it is not something that's history, or in the past. And I think if the pope comes here and does not announce something concrete, it would be devastating for people.

A lot of people who are still within the church are at the point of saying enough is enough. And this letter in itself, while it goes to a certain point, it's the next step that's important, and the next step is announcing the steps he's going to take.

He should be doing that, I believe, here in Ireland. It's the perfect place to do it, when there will be thousands of families from around the world here. Abuse hits at the heart of the family. This is the place where he needs to tell families what he is going to do to protect their children and to stop this in the future.

All the good intentions in the world and the strong words in his letter will be completely a waste of time and meaningless if he doesn't say something now about what he's going to do about it.

People won't wait any longer. Certainly in Ireland here, the issue is huge. There's so many, many thousands of people here and families, devastated by abuse. Not just by clergy, but of all the institutional abuse.

In the U.S., the main call of action at the moment appears to be for firing or removal of bishops. Is that the same in Ireland?

It is exactly the same. People are looking at these men who have covered up, who have known to cover up, who have protected criminals. The few that have had any consequences have been allowed just to resign and walk away. There has to be a clear punishment, accompanied by a judgment on the reasons why they are being removed.

People in the U.S. have been very angry and upset over the Pennsylvania grand jury report. How has it been experienced from a distance?

From here in Ireland, it's simply being received as a reminder of all the reports we have had over the last number of years. No one is shocked by it. When I say they're not shocked by it, they're not surprised by it because they've read it all before, in our own reports here in Ireland. But what it has done is brought all those reports back to the forefront of people's minds. It has reignited the anger in people when they read our own reports first.

It's not new to us; it's not something that we're surprised about. It's just so reminiscent of what we have seen here in all our reports. And it reminds people of the fact that nothing has been done since those reports. People in America want a response to this report. But we've been waiting for a proper response to what has been revealed here. All our own state inquiries showed exactly the same things.

While I'm not saying the content of the Pennsylvania report is not shocking — it's horrific — for those of us in Ireland who have seen our own investigations, it's nothing new. But it does reignite the feelings of anger and frustration and the calls for something to be done.

It's our own reports and what's happened here over the years and the lack of action by the church that's caused the church in Ireland to lose all credibility, to have no moral authority and more, and for people to walk away from the church.

Do you want to say anything else?

I think this is a very significant time in Pope Francis' pontificate. At this point, with devastating revelations around the world, and a high-profile visit to a country where we've had this history, he's got to address it.