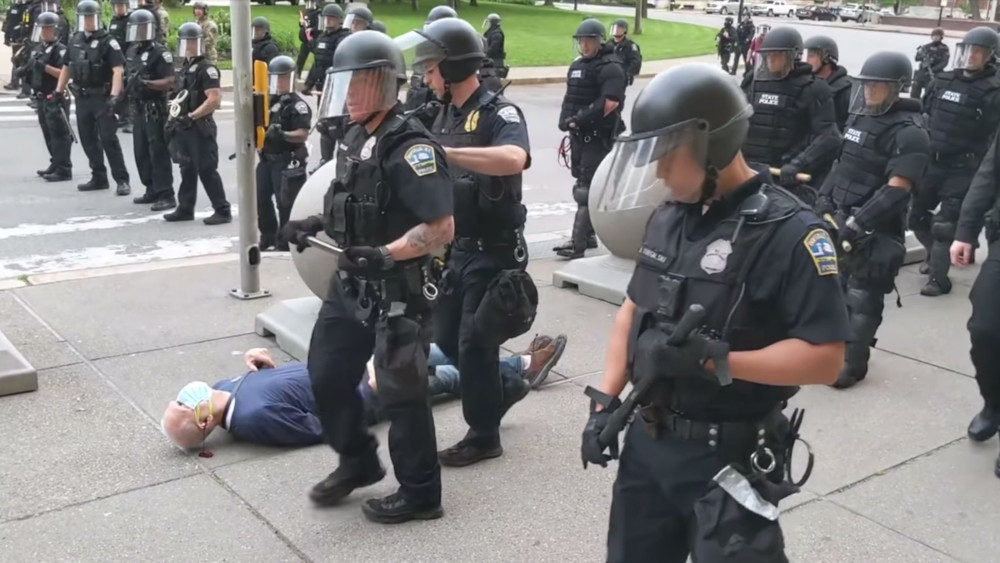 Is Martin Gugino an Antifa provocateur? Or a beloved Catholic peace activist who was the victim of police brutality in Buffalo, New York?

A June 9 tweet from President Donald Trump suggested the former, drawing a wave of shock and outrage from friends of the 75-year-old activist who was shoved to the ground by Buffalo police during a protest June 4 outside City Hall.

The incident, captured on video, went viral and has become symbolic of the kind of police brutality that has sparked calls for fundamental reforms to American policing. In the video, an officer is seen shoving Gugino, who falls to the sidewalk, hitting his head. As Gugino lies unmoving and bleeding, the officer who pushed him is seen hurrying away.

Gugino remains in the Erie County Medical Center in serious condition, though he is no longer in intensive care, a friend said.

Buffalo's police commissioner suspended two Buffalo police officers involved in the incident without pay, prompting dozens of other officers to step down from the department's crowd control unit in protest. On June 6 two of the officers were charged with felony assault.

The president referred to the conservative news site One America News Network in making his unfounded claim.

"Buffalo protester shoved by Police could be an ANTIFA provocateur," Trump wrote. "75 year old Martin Gugino was pushed away after appearing to scan police communications in order to black out the equipment. @OANN I watched, he fell harder than was pushed. Was aiming scanner. Could be a set up?"

Friends of the retired computer scientist described Gugino as a devout Catholic and a graduate of Canisius High School, a private Jesuit school in Buffalo, who is a passionate advocate for multiple causes on behalf of the poor and disenfranchised. Gugino spent his retirement lending a hand to multiple causes, among them Black Lives Matter.

"Martin has a passion for social justice," said Mark Colville, who runs Amistad Catholic Worker   in New Haven, Connecticut, and has known Gugino for years. "When he sees wrong he wants to be involved in making it right."

Colville said Gugino made multiple trips from his home in the Buffalo suburb of Amherst to New Haven — a six-and-a-half-hour drive — to help prepare and serve meals at Amistad, a house of hospitality that describes its mission as "follow(ing) Jesus in seeking justice for the poor."

Gugino never wanted to draw attention to his work, Colville said. He's a private person who lived alone. He cared for his mother until she died, and he recently lost his sister, too.

On June 6, Colville drove up to Buffalo to see if he could visit his friend in the hospital. He was not allowed past the reception desk but instead did the next best thing. He went downtown to take Gugino's place at a protest on the street where videos had captured police knocking Gugino to the ground while clearing protesters away from City Hall.

"Martin is shy and reserved," Colville said. "He likes his privacy. He doesn't make a spectacle of himself. He likes to show up and be present. He likes to be involved in these movements for justice. But he doesn't do it in a self-promoting kind of way." 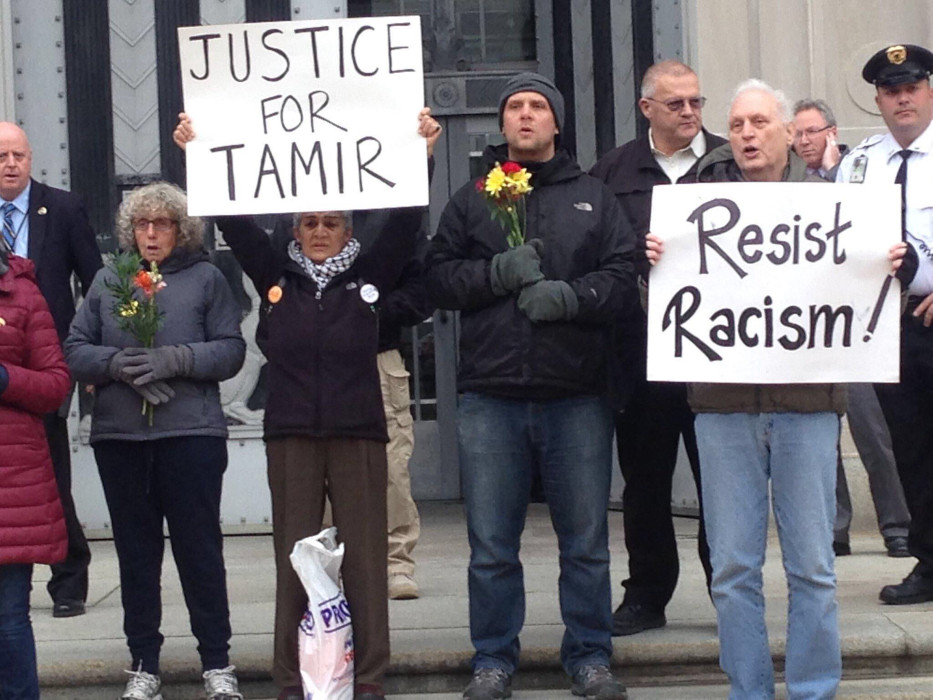 In this 2016 photo, Martin Gugino, right, holds a sign reading "Resist Racism," in Washington, D.C., as part of a protest over the 2014 killing of Tamir Rice, an African American boy from Cleveland, Ohio. Gugino and others demanded murder charges against police officers for the killing. (AP/RNS/Mark Colville)

The two have worked for years to advocate for the closing of Guantanamo Bay, the U.S. detention camp in Cuba where terrorism suspects could be detained without process.

Gugino is active in Witness Against Torture, an organization formed in 2005 to protest the treatment of detainees on the base. Each January, group members travel to Washington, D.C., to fast and hold vigil outside the Department of Justice.

Much of the work was done on behalf of Muslim prisoners, many of whom were picked up by the CIA and taken to Guantanamo after the 9/11 terrorist strikes.

"People, including Martin, made connections between their own faith and the faith of people detained because of their own faith," said Matt Daloisio, a New York state public defender and one of the organizers of Witness Against Torture.

Daloisio and several others say they've been texting Gugino in the hospital and he's been responding with emoji hearts rather than texts.

Guigino's Twitter account and YouTube videos have been deactivated. He is represented by lawyer Kelly Zarcone, who said June 9:  "We are at a loss to understand why the President of the United States would make such dark, dangerous, and untrue accusations against him."

Democratic presidential candidate Joe Biden tweeted in response to Trump that "there's no greater sin than the abuse of power," and Biden mentioned that he, like Gugino, is a Catholic.

Tom Casey, a retired civil engineer from Buffalo and a local coordinator for Pax Christi, an international Catholic peace movement, said the idea that Gugino is a provocateur is ludicrous. Gugino was certainly opinionated, Casey said, but always respectful of others.

"I have never heard him use a vile or angry word against anybody and I spent a lot of time talking to him," Casey said.

Gugino was also active on behalf of Black Lives Matter. After the 2014 killing of Tamir Rice, a 12-year-old African American boy who was shot by a police officer, Gugino traveled to Cleveland to meet with Rice's parents. In 2016, Gugino participated in a protest in front of the Justice Department in which demonstrators called for murder charges against the officer who shot Rice.

Gugino's presence at the Black Lives Matter protest last week was typical of his activism. He is also active with the Western New York Peace Center and PUSH Buffalo, a coalition working on affordable housing.

This fall, Jericho Road, a community health clinic in Buffalo, featured Gugino in its newsletter's "donor spotlight." Asked why he gives, Gugino wrote: "In the Sermon on the Mount, Jesus said to clothe the naked, shelter the homeless, feed the hungry, and give drink to the thirsty."

"Martin is consistent," said Mary Anne Grady Flores, an Ithaca New York Catholic Worker who participated with Gugino in multiple protests against Hancock Field Air Force Base's use of remotely piloted drones to kill insurgents in Afghanistan and elsewhere. "He's a gentle giant, who is so articulate, so thoughtful."