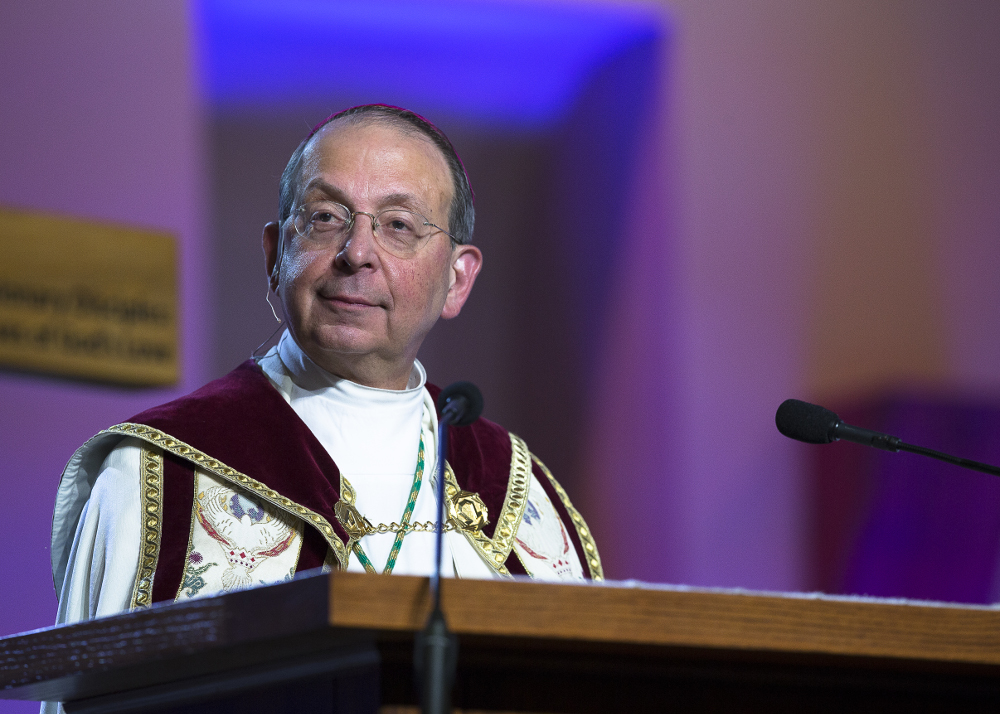 Baltimore Archbishop William Lori, who is apostolic administrator of the Diocese of Wheeling-Charleston, W.Va., presides over the closing morning prayer Sept. 23 during the Fifth National Encuentro in Grapevine, Texas. (CNS/Tyler Orsburn)

In a Sept. 24 letter to the clergy of the Archdiocese of Baltimore, Archbishop William Lori informed priests and deacons that the archdiocese has been in discussions with Maryland Attorney General Brian Frosh about an investigation of records related to the sexual abuse of children.

"It is my hope and prayer that this independent review and other acts of transparency by the Archdiocese will bring about greater trust in the church among those who are understandably skeptical about the church's handling of allegations of abuse," Lori said.

Aleithea Warmack, deputy director of communications for the Maryland Office of the Attorney General, said Sept. 24 the office's standard policy is to not confirm or deny the existence of any investigation.

She told the Catholic Review, Baltimore's archdiocesan news outlet, the Office of the Attorney General's website includes a quick link on its home page at www.marylandattorneygeneral.gov to report allegations of child sexual abuse, especially in a school or place of worship. The link generates an email form that can be sent to the attorney general's office, and that information is monitored, Warmack said.

The Archdiocese of Baltimore was one of the first in the country to release a list of priests and brothers credibly accused of child sexual abuse, with the publication of a list of 57 names in September 2002.

Since that time, 18 additional names were added of priests of the Archdiocese of Baltimore who, after September 2002, were accused of child sexual abuse during their lifetimes.

In early September, the archdiocese added 10 names to its list of priests and religious brothers accused of child sexual abuse.

The new names are those of priests mentioned in the Pennsylvania grand jury report released Aug. 14 who served in the Archdiocese of Baltimore or were alleged to have abused minors in Maryland.

Drew Dillingham, coordinator for resources and special projects in the U.S. Conference of Catholic Bishops' Secretariat of Child and Youth Protection, said that based on the correspondence he has received, at least 50 dioceses or archdioceses out of 197 in the country have published a list in some form of clergy credibly accused of child sexual abuse.

Other states also have recently announced investigations into clergy sexual abuse of minors, including Michigan, Missouri, Indiana and New York.

On Sept. 13, Lori was appointed as apostolic administrator of the Diocese of Wheeling-Charleston, West Virginia. He announced that Pope Francis had instructed him to conduct an investigation into allegations of sexual harassment of adults against Bishop Michael Bransfield, whose resignation as bishop of the diocese the pope accepted at that time.

In a homily at the Cathedral of St. Joseph in Wheeling Sept. 15, Lori said: "I assure you that this investigation will begin promptly and, while I have been asked to oversee it, it will actually be conducted by competent laypersons with the necessary skills. The goal of this investigation is to arrive at the truth and justice for the good of individuals involved and for the common good of the church we love."