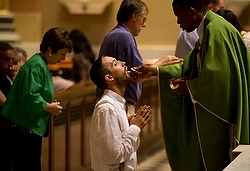 A man kneels to receive Communion during a weekday Mass at the Cathedral Basilica of Sts. Peter and Paul in Philadelphia in 2011. (CNS/Nancy Phelan Wiechec)

VATICAN CITY -- Half a century after the start of the Second Vatican Council, the reform of the liturgy initiated there has not lost its power to stoke controversy.

On Wednesday, after years of on-again/off-again talks with the traditionalist Society of St. Pius X, which effectively broke from Rome almost 25 years ago to protest the teachings of Vatican II and subsequent changes to the Mass, the Vatican announced that the traditionalists had been formally offered terms of reconciliation.

But the following day, the SSPX announced that unresolved "doctrinal difficulties" might lead it to prolong negotiations yet again. Prominent among the outstanding issues it cited was the form of the Mass introduced by Pope Paul VI.

Even among the vast majority of Catholics who have accepted the Mass in its current form, debates often occur over aspects of worship that include choices in sacred music, the correct manner of receiving Communion, and, in the English-speaking world, the revised translation of the Mass, which was introduced last year.

Yet according to one distinguished scholar, such disputes are largely rooted not in the liturgical texts themselves, but in contemporary misunderstandings about the very nature of Catholic worship.

Benedictine Fr. Jeremy Driscoll is a professor at Rome's Pontifical Athenaeum of San Anselmo and the author of a guidebook for non-experts, "What Happens at Mass."

A zealous debunker of what he regards as false dichotomies and oppositions, Driscoll rejects a common complaint that the reform has turned the Mass into a communal meal at the expense of its traditional sacrificial dimension, or that it places excessive importance on the faithful instead of focusing on God.

"Sacrifices are meals," he says. "That's the way in which one participates in sacrifice."

Similarly, he says, God and the assembly are inextricable in a proper understanding of the Mass.

Yet a mistaken sense of separation between God and community can occur, Driscoll warns, if the assembly conceives of worship as self-expression -- a tendency he finds especially common in his native land.

"We Americans," he says, "have come naturally to think that in the liturgy we want to express ourselves, and if it doesn't feel like us, then we don't want to say it. But the whole tradition of liturgy is not primarily expressive of where people are and what they want to say to God. Instead, it is impressive; it forms us, and it is always bigger than any given community that celebrates."

One unifying element for Catholics around the world, Driscoll says, is liturgical Latin -- even though most Catholics now attend Mass in modern languages.

Much of the controversy over the new English translation of the Mass, he notes, has surrounded language that strikes listeners as awkward, because of the translators' mandate to be faithful to the original Latin.

"The reason for that is that we're translating ancient texts that carry with precision the faith that unites us around the world," says Driscoll, who was a consultant to the Vox Clara Commission, an advisory body that reviewed the new translation on behalf of the Congregation for Divine Worship and the Sacraments.

Yet many aspects of worship allow for flexibility, he says, including the much-debated question of which direction the celebrant should face.

"If (the priest) is facing the assembly and the assembly is gathered around the altar, you're making a kind of visual symbol," Driscoll says, "a symbol of the whole community united."

On the other hand, he says, it would be wrong to describe a priest facing east, in the traditional style, as "turning his back to the people."

"Christ the priest turns toward his father with his people behind him, that's what it means," he says. "You can't see what's happening, but in fact there is nothing to see. The mystery is invisible no matter which way you turn."

Likewise, he says, kneeling to receive Communion is a "beautiful gesture of adoration," yet standing for the same purpose is also a "tremendous gesture when it's properly understood; there's nothing arrogant about it. I wouldn't dare stand before God were I not standing with Christ. But in him, I dare."

While such topics are not worth fighting over, Driscoll says, liturgy is a legitimate subject for debate because it remains a work in progress. Just as Vatican II merely initiated a reform undertaken extensively under Pope Paul VI, the church today continues to correct, refine and, in some cases, restore elements of traditional usage.

"The church lives on after a council and continues to do its work," he says. And the Mass "is a living product that takes place under the guidance of Peter."