Bono and Guggi: A friendship based on art, punk rock and Jesus 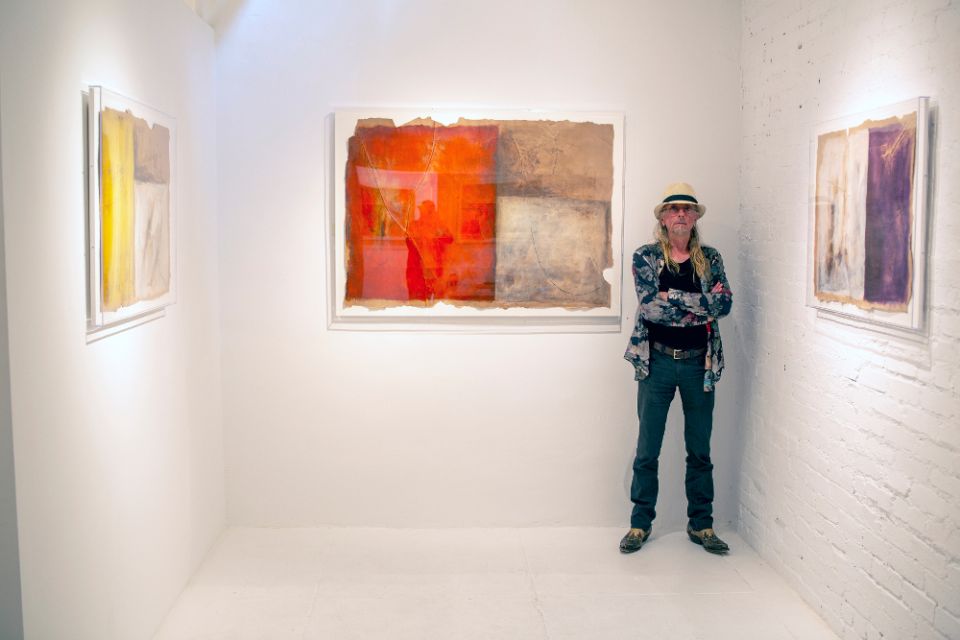 Modern artist Guggi poses with some of his “Broken” paintings at his exhibition, “My Cup Overflows,” in the Arcane Space in Los Angeles. (RNS/Bhushan Thakkar (www.20evo.com))

Venice, Calif. — At the height of Ireland's sectarian Troubles in the early 1970s, when he was not long out of diapers, Paul Hewson met Derek Rowen, a neighbor boy from a few houses away in their working-class Finglas neighborhood of North Dublin.

The Hewson family lived at No. 10 Cedarwood Road.

More than 50 years (and two famous nicknames) later, Hewson, aka Bono of U2, and Rowen, the contemporary artist better known as Guggi, remain the best of friends.

As children, they bonded over a shared love of punk rock, mischief making and Jesus.

As men, they have channeled the spiritual, cultural and personal tumult of their youth into art.

For Bono, it became music.

"Myself and Bono, we weren't like the other kids in the street and we knew we weren't," Guggi told Religion News Service recently during "My Cup Overflows," an exhibit of his new works at Arcane Space, a gallery in the Venice neighborhood of Los Angeles co-owned by Morleigh Steinberg, wife of U2 guitarist The Edge.

"I was seen as an oddball, a freak," said Guggi, who turned 60 in May and is 362 days older than Bono. "We didn't know what to say when they would want us to name our favorite football players because we didn't know any names. We could get beaten up for supporting the wrong team or not supporting anybody."

One thing they did have in common was an interest in developing their Christian faith.

Bono's parents had what was considered to be a "mixed marriage" at the time — his father, Bob, was Catholic, his mother, Iris, Protestant. Bono and his older brother, Norman, were reared in the Church of Ireland (the Irish iteration of the Episcopal Church).

Guggi was rarer still in the predominantly Catholic Republic of Ireland, where he was born into a devoutly religious family rooted in the Christian Brethren (Irish cousin of America's Plymouth Brethren) tradition. He is the second oldest of 10 children (seven boys and three girls).

Guggi brought up his own children religiously in one of Dublin's Baptist churches. "It just happened to be a Baptist church — I'm not interested in brand names, I just wanted the message as it is in the Gospels," he said.

His father, Robbie, who turns 86 this month, was and remains something of a zealot.

Bono once told me that the elder Rowen was "straight out of a Flannery O'Connor novel — it was like the prophet Jeremiah lived on our street."

"I always remember the color of the language he used when he preached at us and the conviction of the words he used," he told me in a 2005 interview.

Guggi describes his spiritual upbringing as "strict, Puritan," and says his father ruled his family with an iron fist. And yet he had a genuine faith that has compelled a lifelong generosity.

The eccentric elder Rowen was a virtuoso salesman, first for Eveready batteries and later for Raleigh and Peugeot bicycles, with a passionate, if sometimes overbearing, faith. He was also a consummate collector — of motorcycles, boats, "anything with wheels," and once, a flock of sheep.

Bono's mother, Iris, died when he was 14. After her death, Bono spent a lot of time at Guggi's house, where he fell in naturally among the 10 Rowen siblings.

Guggi persuaded Bono to attend a Bible camp when they were tweens.

"My Dad would send us to the YMCA where they had something called the 'boys department' where boys went — not boys and girls, just boys — and the boys department went on a camp every year, Guggi said.

It was called "camping," but it was more like sleeping bags on the rec room floor, he said.

"We slept in tents maybe a couple of times, but it was mostly school halls, church halls, that kind of thing, and yeah, myself and Bono went there every summer," he said. 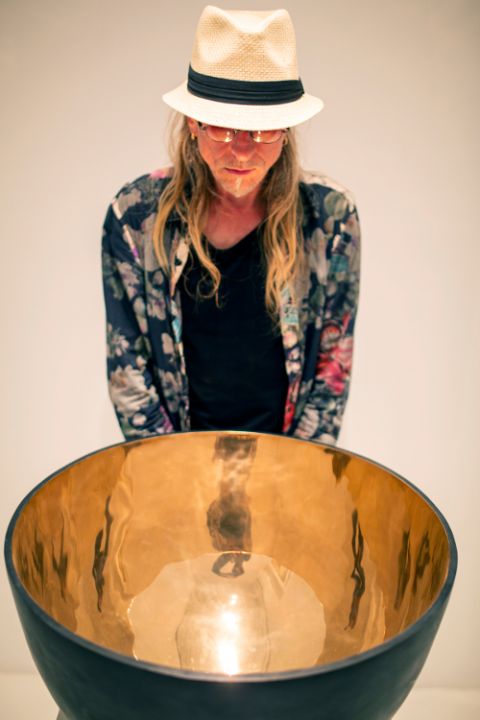 Like his friend Bono, Guggi tried his hand at music.

As a teenager, he formed a band, The Virgin Prunes, with Gavin Friday (another childhood friend of Bono's), Dik Evans (brother of U2's The Edge), and others.

The Prunes, who disbanded in 1990 and still have a hearty cult following in parts of Europe, incorporated elements of goth, performance art, and cross-dressing into their performances.

Guggi left the Prunes in 1984 to focus full time on his artwork.

It was about this time, at his grandmother's funeral, that he heard a message that changed the way he understood his calling as an artist.

"I've drawn and painted since I was a child, and I kind of started feeling guilty about it — what am I adding here? What am I bringing to society?" Guggi said. "But then this preacher at my grandmother's funeral said, 'If we are created in God's image, we must in some way be like him. And if God is the creator, we must also be creative.' That just struck a chord with me — that art isn't just enough to do, it's a special thing to do. I feel incredibly privileged to be able to paint, to be able to make pictures and sculptures."

Now one of Ireland's most celebrated modern artists, Guggi is perhaps best known for featuring empty bowls, jugs, spoons and other quotidian objects in his work, whether in oil, mixed media or sculpture.

Those works include a massive 15-foot-tall, 7,000-ton bronze bowl titled "Calix Meus Inebrians," which stands among the grape vines at the Chateau La Coste vineyard in Aix-en-Provence, France.

A 100-pound, nearly two-foot-tall bronze bowl titled "Poculum ex Vinea" ("a cup of vines") is featured in Guggi's new exhibition alongside a series of paintings on brown paper called "Broken." The art historian and poet Kevin Grovier described the work this way: "By salvaging beauty from distress, soulfulness from fragmentation, Guggi creates objects from another world."

The artist himself isn't too keen on analyzing his artwork — "It's not a verbal medium," Guggi said.

He added that, "artists should be more like Victorian children: seen and not heard." But he admits there is a spiritual connection to his habit of focusing on vessels and finding the sacred in the ordinary.

"I'm merely a channel, and it comes through me and I'm available for service in that sense," Guggi said. 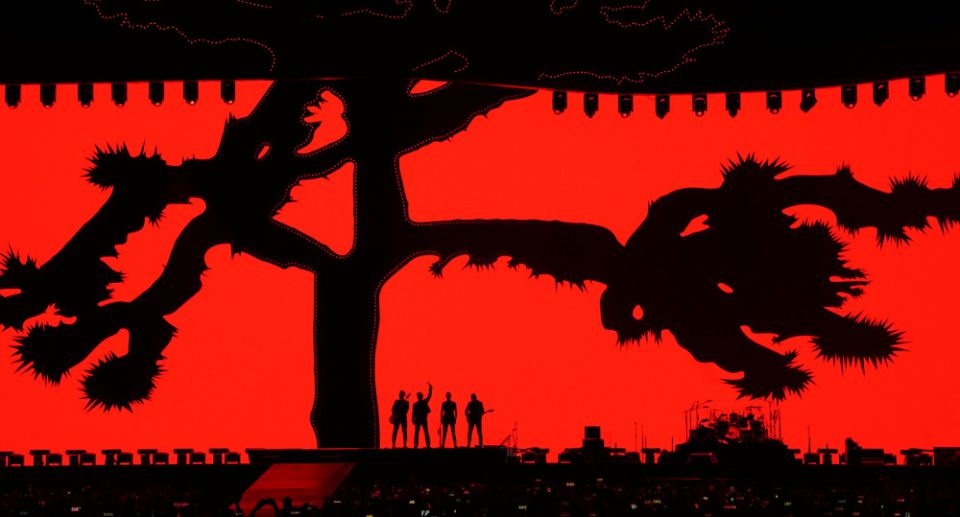 U2 on stage during the opening concert of their global The Joshua Tree Tour 2017 in Vancouver, British Columbia, Canada, on May 12, 2017. (Reuters/Nick Nidlick)

He started with portraiture, inspired by photos he took of a peculiar street preacher — a woman who was part of a fundamentalist Catholic sect.

"She would have a child's glove in one hand and some literature or something in the other and she'd be waving it around," Guggi said. "She was quite bonkers, but she did have a great face."

He made countless abstract portraits based on the woman's face until he realized what he was drawing wasn't the curve of her face, it was a bowl.

"That was what led to taking simple, common, everyday objects that we walk past all the time, and we don't notice are there, that are functional. I started painting these objects, and I never stopped," Guggi said.

During the recording of U2's "The Joshua Tree" album in 1985, Bono summoned Guggi and Gavin to their local pub, known as The Gravediggers, to ask a favor.

"He said, 'Look, I want to paint. We're putting this album together, we're making this record, but I need to get away from that,' " Guggi recalled. "Bono always loved painting, and we painted together as children, as teenagers."

Bono set aside a room in the large manor house where the band was recording "The Joshua Tree" and asked Guggi to fill it with art supplies, which he did.

The trio — Bono, Guggi and Gavin — joined by a fourth friend, Charlie Whisker, who would go on to direct videos for U2 and Bob Dylan among others, would gather on Wednesday nights to make art. A year after the album came out, the friends hosted a group exhibition of their work at a Dublin art gallery called "Four Artists, Many Wednesdays."

The exhibit also included photographs Bono had taken on his first visit to Africa during the Ethiopian famine in 1985.

Like most longtime friends, over a lifetime the men have shaped each other. For instance, both are fathers — Bono has four children, Guggi has five (all boys) — and have sons named Elijah. Bono's oldest son is Elijah Bob Patricius Guggi Q Hewson.

When the lifelong friends speak, sometimes you can hear whispers of one in the other.

"I am a believer, 100 percent," Guggi insists when the conversation circles back to matters of faith. "I'm not a very good example of one, but you're either in or you're out."

Bono, whose lyrics are laden with spiritual and biblical imagery and who in recent years has been quite open about his Christian faith, has famously said, "I'm not a very good advertisement for God."

On U2's perhaps most autobiographical album to date, 2014's "Songs of Innocence," Bono dedicated a song to Guggi called "Cedarwood Road." It says in part:

"I was running down the road

The fear was all I knew

I was looking for a soul that's real

Then I ran into you…

Paint the world you need to see."

Culture | Bono and Guggi: A friendship based on art, punk rock and Jesus

Memoir at its best with practical advice to battered women