In 'Gospel of John' onstage, actor takes on John's voice, telling his story 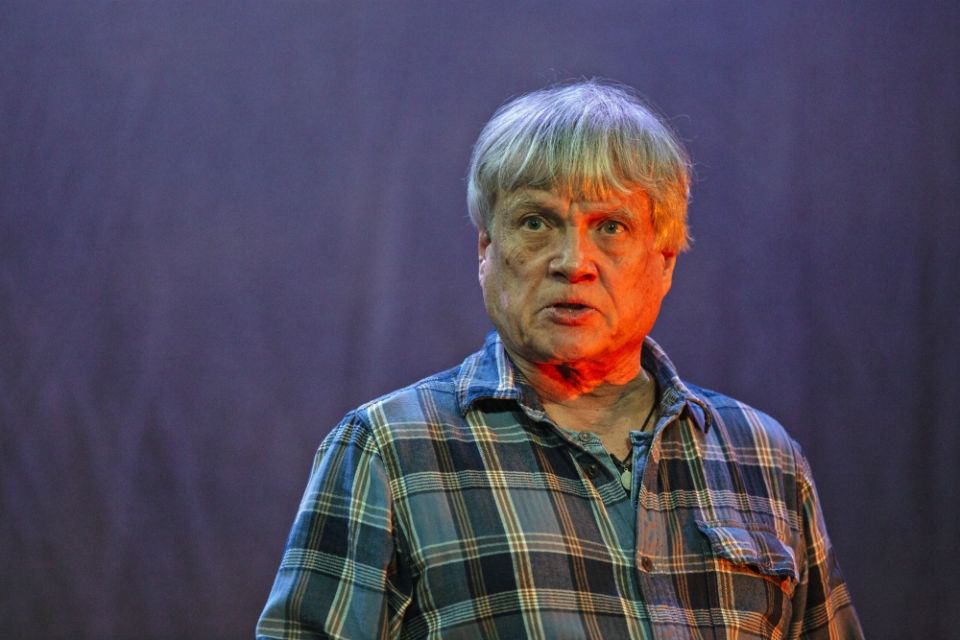 When actor Ken Jennings was going through a rough patch two years ago, he began to memorize St. John's Gospel as a way to take his mind off of his troubles. He saw this exercise as a form of prayer and a way to follow the guidance of the Jesuits who had taught him at St. Peter's Prep and St. Peter's College in Jersey City, New Jersey. They had said, "No matter what happens in your life, always remember to pray." He followed that advice.

"It was a process," he said. "I started to memorize, not knowing if I was going to complete the task. I was not worried about a time frame. Then I started to realize, 'I'm getting this under my belt.' "

Reciting the Gospel — all 21 chapters — was so healing he decided to offer it free to churches. The reactions so moved him that he began to envision a larger forum.

In what he calls "a gift of the Holy Spirit," he turned to a priest friend to get connected to the Sheen Center for Thought & Culture in Greenwich Village, New York, where he can now be found six or seven times a week through Dec. 29 presenting "The Gospel of John."

An award-winning Broadway actor who has performed alone in clubs and poetry readings, Jennings, 72, had never done a one-man play. And he doesn't consider that he is doing one now. Other actors have taken the Gospel to the stage, most notably British actor Alec McCowen in "St. Mark's Gospel" on Broadway. McCowen called his work a play and took on the different characters with voices and accents as an actor would. Jennings, who has watched the DVD of McCowen's performance, chose another approach. 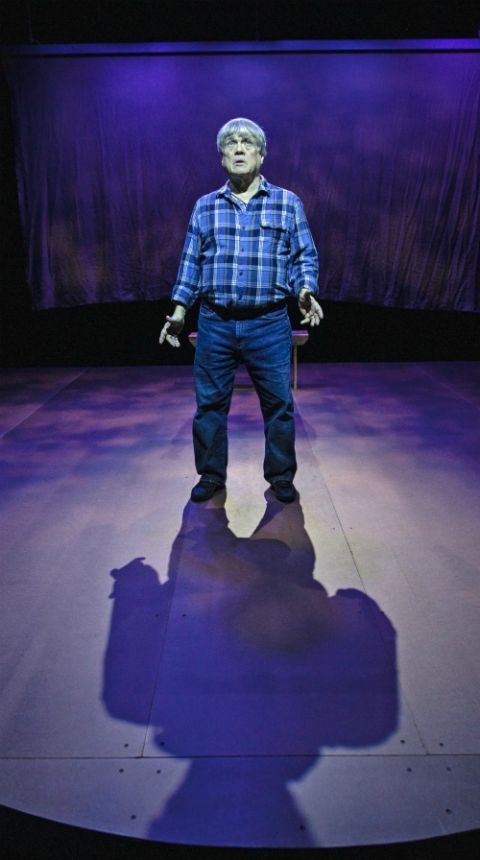 "I thought, 'What can I do that's different,' " he said during a telephone interview from his Manhattan, New York, home while the production was still in rehearsal. "I memorized it as a prayer, not a performance. I thought, 'I'm going to do this as a prayer, even now.' John himself wasn't an actor. He was a witness so he's not telling to entertain as an actor would. He's saying, 'Look, I saw these things. I was there.' That's what I hope to do. I just do it as if I'm John. The audience will realize they are seeing something different, not showbizzy at all."

Since he's being John, he doesn't use accents to distinguish the other characters featured in the narrative.

"I let the story tell itself."

But unlike in church performances when he had only "a chair and an old Bible," he now has a lighting designer (Abigail Hoke-Brady) and set designer (Charlie Corcoran). Jennings told costume designer Tracy Christensen how he wanted to look. "Normal street clothes. I should look like I just walked in off the street."

"All of that's going to help me tell the story as well. The lights have to be evocative to me and the audience to be the sights and sounds John is telling the audience about."

The efforts have already made their mark. DC Metro Theater Arts listed "The Gospel of John" in its top 10 Christmastime shows in New York City, alongside such established favorites as "George Balanchine's The Nutcracker" and "The Radio City Christmas Spectacular Starring the Rockettes," which is interesting considering John's Gospel doesn't include the Nativity.

Jennings turned to John's Gospel in his time of need because it seems more firsthand than the other Gospels. He quotes from John's conclusion: "This is the disciple who is bearing witness to these things, and who has written these things and we know that this testimony is true."

"This was really said by a guy who was there. He's very specific." 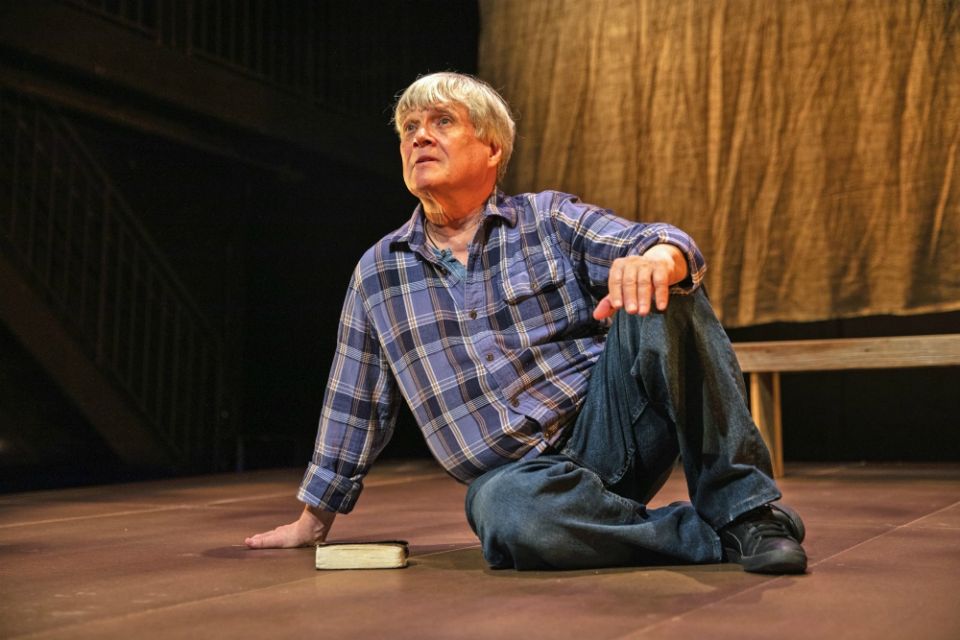 Ken Jennings in "The Gospel of John": "In essence, it becomes the prayer it began as. It flows around my life. In some ways that makes it easier, but it's still tiring." (©2019 Maria Baranova)

"That's why it took so long. I probably would have been able to do it faster if I knew I was going to complete it. I just did it as daily prayer."

In preparing for the theatrical run, he read nearly a dozen scholarly treatises on John and incorporated some phrases into his script, using the Revised Standard Version and several other Bible translations and substituted some of his own wording to make it more conversational. Realizing he would be on stage for hours if he used the entire Gospel, he made some cuts to keep the show at 90 minutes with no intermission.

Rehearsals were intense — just himself with a director and stage manager — and unlike anything he had ever done in terms of breadth and depth. But he felt ready for the challenge.

"So much of theater can dominate your life. This is different. In essence, it becomes the prayer it began as. It flows around my life. In some ways that makes it easier, but it's still tiring."

Since he felt uneasy about cutting the Gospel to fit to stage time, he showed the script to a friend from St. Peter's Prep, Jesuit Fr. Tony Azzarto, who gave his approval.

"I thought, 'That's only one Jesuit." So he asked the Rev. John Beddingfield, rector of the Episcopal Church of the Holy Trinity, the church in his Upper East Side neighborhood where Jennings first performed this work. Again, he was given the go-ahead.

Expanding his base, he sought out the opinions of the Rev. Scott Stearman from Metro Baptist Church, where Jennings now worships, and his friend Sacred Heart Sr. Eve Kavanagh. He was told by both to proceed.

Jennings said there has been some talk of finding a way to take his performance on tour, which he hopes will happen. Asked if he speaks or prays to John for help, he offers a resounding yes.

"I ask him to help me be more you. To be a better person and to help me perform you."

[Retta Blaney is an eight-time award winning journalist and author of Working on the Inside: The Spiritual Life Through the Eyes of Actors.]

The gravity of discipleship