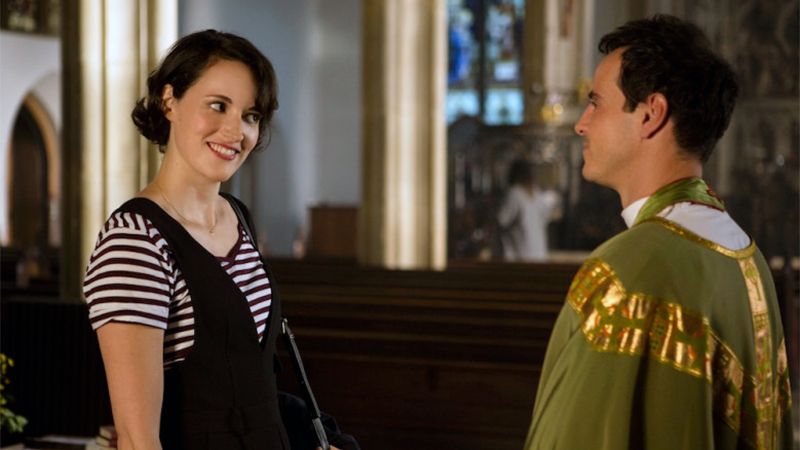 The Roman Catholic Church might not have dreamed up this marketing campaign on its own: a sexy, heavily swearing and equally heavily drinking priest who struggles to resist the charms of a highly promiscuous Londoner.

But the second season of the offbeat British comedy "Fleabag," which starts next week in the U.S. on Amazon Prime, won not only praise for its creator Phoebe Waller-Bridge when recently shown in the U.K., but also legions of fans for the Catholic priesthood, thanks in part to its handsome, swearing, gin-swilling cleric.

In nominally Anglican, largely secular Britain, Catholic priests are a mysterious group: celibate, hidden behind their screens in the confessional and wearing liturgical vestments that border on camp. And that's the good news: many link Catholic priesthood with pedophilia, due to the sex abuse scandals documented in the Oscar-winning movie "Spotlight." On top of which, the church bans women from its ranks while outlawing abortion, contraception and even IVF treatment.

Yet in the ultra-liberated "Fleabag," Waller-Bridge, in the eponymous role of a "dark, contradictory, lying, acerbic sex addict," discovers that a Catholic priest understands her like nobody else ever has. Waller-Bridge begins season 2 by telling the audience "this is a love story." It is up to the viewers to decide what love means.

Waller-Bridge first dreamt up the comedy in 2013 as a one-woman play, after friends found her a slot at the Edinburgh Fringe, the British comedy world's premier summer festival. When it won a top award, the BBC, with Amazon, commissioned a six-episode television series.

Waller-Bridge went on to write the award-winning spy thriller "Killing Eve," the rom-com "Crashing" and appeared on Broadway recently in "Fleabag" in its original one-woman format.

Vivacious, funny, irritating, complex, vulnerable and sex-obsessed, Waller-Bridge's character nonetheless fights an evident, if never admitted, loneliness that numerous hookups only deepen. That vulnerability is even more on display when Fleabag meets the priest who is to officiate at the wedding of her widowed father to her malevolent godmother (played by "The Favorite" Oscar winner Olivia Colman).

It's fair to say that few fans expected the series to take a faith-based turn. But the official description for season 2 says: "With hope and faith at the core of season two, our heroine finds herself in the midst of a battle she is determined to win: Fleabag vs God."

It is not an evenly matched duel, for God has as his second his priest. First he disarms Fleabag with his looks — "hot," she says in one of her patented camera asides — then floors her with his boyish charm. But his most lethal weapon is brought into play later on: a gift for pastoral care.

American viewers should take notes during Fleabag's encounter with her therapist and compare and contrast her skills with those of the priest during his later encounters with this angry, grieving woman. It's akin to watching first an amateur, then a sporting, Olympian.

The priest's talents have combined to make many British non-Catholic viewers wonder what they had been missing all these years by not going to Mass. Catholics, meanwhile, found the depiction of "Father" exceptionally idealistic.

The Catholic clergy in the U.K. are mostly elderly, and, as for good looks — it's not uncommon to hear people respond with disbelief when they first spot the camera-ready prefect to the papal household, Archbishop Georg Ganswein. But what many British Catholics yearn for most is the pastoral care that Fleabag experiences.

Non-Catholic Fleabag fans who have already watched season 2 have sometimes asked, baffled: "Why can't priests marry? Surely 'Fleabag' highlights that they should?"

Without celibacy, of course, Phoebe Waller-Bridge would not have been able to create such heartache and dramatic tension. Then there's the issue that all Catholics debating a married priesthood must consider: if priests like Fleabag's beloved were married, would they have the time and pastoral capacity to provide the spiritual succor that the walking wounded of the 21st century — the Fleabags of this world — so badly need?

Fleabag starts streaming on Prime on May 17.

Father Josh: A married Catholic priest in a celibate world