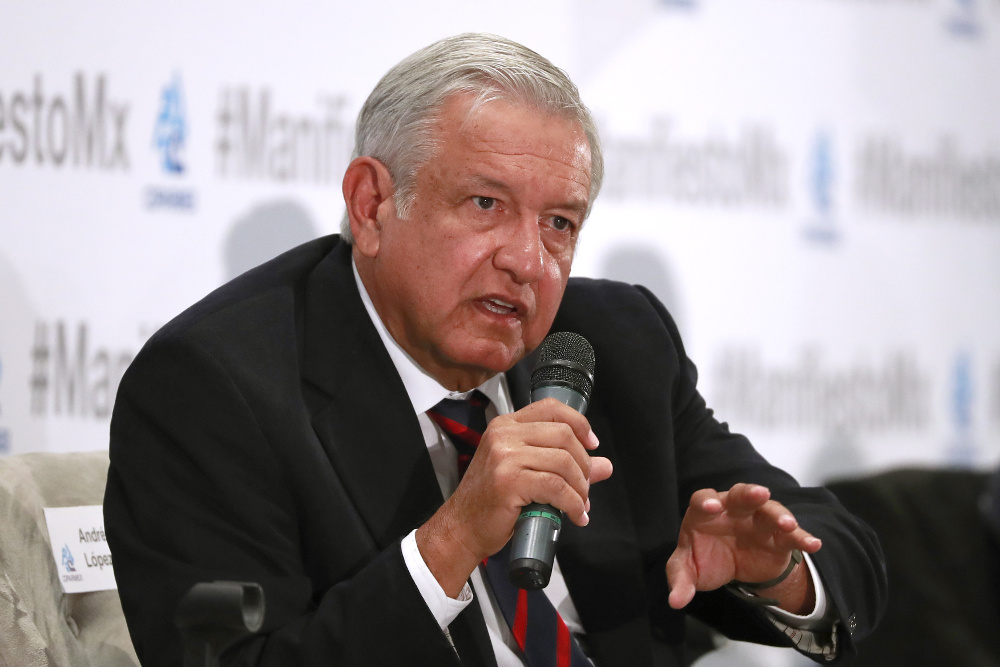 Earlier this year, Andres Manuel Lopez Obrador, best known for promising to bring down Mexico's "mafia of power," stood solemnly at a lectern talking about religion.

"The time has come to present a proposal based on the aim that when we obtain the presidency, we must not only seek to achieve material well-being, we must also seek well-being for the soul," said the veteran leftist and runaway favorite to win the July 1 presidential election. "Just as we already have a political constitution, we are going to elaborate a moral constitution."

Victory for the 64-year-old, often referred to as AMLO, would come after two previous unsuccessful attempts and the formation of an entirely new party — the National Regeneration Movement, or MORENA — which revolves entirely around him.

Lopez Obrador's larger-than-life political personality is usually analyzed as a struggle between the radical side, which refused to accept defeat in the 2006 election, and the arch-pragmatist who governed Mexico City as mayor between 2000 and 2005.

Now the candidate's religiosity — of which the moral constitution proposed in February is just one example — is in the spotlight, even if understanding it is hampered by Lopez Obrador's deliberate ambiguity.

Old fading photographs of a young altar server in the riverside village of Tepetitan in the southern state of Tabasco testify to a Catholic childhood. He also regularly attended Mass with his first wife and their three sons, until her death in January 2003.

But many believe Lopez Obrador has since become a Protestant, encouraged but not confirmed by his descriptions of himself as "a Christian in the broadest sense of the word," professions of his admiration of Jesus, and a video of him receiving a blessing from a pastor. He also announced an electoral alliance with the tiny conservative evangelical Social Encounter Party.

Yet Lopez Obrador has never stopped reaching out to Catholics.

He formally launched his candidacy Dec. 12, the feast of Our Lady of Guadalupe, known as "La Morena," and is close to Fr. Alejandro Solalinde, a famous activist priest who runs shelters for Central American migrants.

Fr. Miguel Concha, a priest who knows the candidate well, said Lopez Obrador takes Communion at his church every year in the annual Mass held to commemorate his first wife's death.

"Andres Manuel is deeply respectful of the religious and nonreligious convictions of all people, but he is a Catholic, and, up to a certain point, a practicing one," Concha told Catholic News Service earlier this year.

Mexico's ecclesiastical institutions tend to avoid making specific comments about candidates during election periods, wary of being accused of blurring the constitutionally enshrined separation of church and state.

"They are not allowed to say anything about the candidates, it is against the law," Diego Lopez of the Mexican bishops' press office told CNS June 13. "They can call on people to vote and things like that."

He said the bishops had met with all four presidential candidates in April, but that the dialogue was private.

Leading religious sociologist Roberto Blancarte of the presitigious El Colegio de Mexico said he believes the Catholic-Protestant debate misses the point. Lopez Obrador can also sound like a New Age proponent when he talks of "soaking up the energy" beside Mayan ruins and enthusiastically participates in indigenous rituals.

"He is pantheistic," Blancarte wrote recently in the Milenio newspaper. "He adores all gods and all spirits and, if he wins, they will all be in the National Palace."

Whatever the details of his beliefs, the hardened leader often described as "a firebrand" has been particularly fond of responding to attacks with the promise of "peace and love" during this campaign. At times this has come with an ironic wink, at times it has sounded deeply heartfelt.

When he shocked many by revealing his idea for a moral constitution in February, he described it as a response to "the current crisis" that responded to a "loss of values" and "requires a new current of thinking that promotes a moral paradigm of love for the family, for your neighbor, for nature and for the homeland."

Former collaborator Polimnia Romana — who spent 10 years as his personal assistant, security director and logistics coordinator — said he began carrying around a Bible about 2007.

"He started saying things like 'corruption is not Christian' and those of us in the car would just look at each other (in shock)," she told CNS. "But it all fit. He was always socially conservative."

Many on the Mexican left are uneasy about their leader blurring the country's traditional separation of religion and politics, though they had also assumed he would stop short of rolling back legal guarantees of abortion rights and gay marriage. His sudden alliance with the openly homophobic Social Encounter Party, however, triggered a small but mold-breaking protest from some of his inner circle.

The candidate quickly promised that LGBTQ rights would be respected in his government but has since continued to hint that he does not identify with the cause.

"I'm not conservative, not that it bothers me if they call me that," he said on TV Azteca in early June. "There are many things that I don't pick up from the left. For example, pushing the family to one side," he said in the same interview.

For some, Lopez Obrador's new penchant for spiritual themes adds a new dimension to the charge that he fosters a personality cult.

"Could it be that AMLO feels that he has not just been chosen by the people but designated by God to bring salvation and prosperity to the homeland?" Bernardo Barranco, an academic and author on Catholic matters in Mexico, asked in his column in La Jornada in May. "Is the cult of political personality transforming into a quasi-religious one?"

Barranco did not answer, and neither does Lopez Obrador.

During his speech about a moral constitution, the candidate took a break to assert that none of what he was saying challenged the separation of church and state, which distinguishes Mexico from much of Latin America.

"Jesus was very clear about this," he said, with no hint of irony. "Give to God what is God's and to Caesar what is Caesar's."