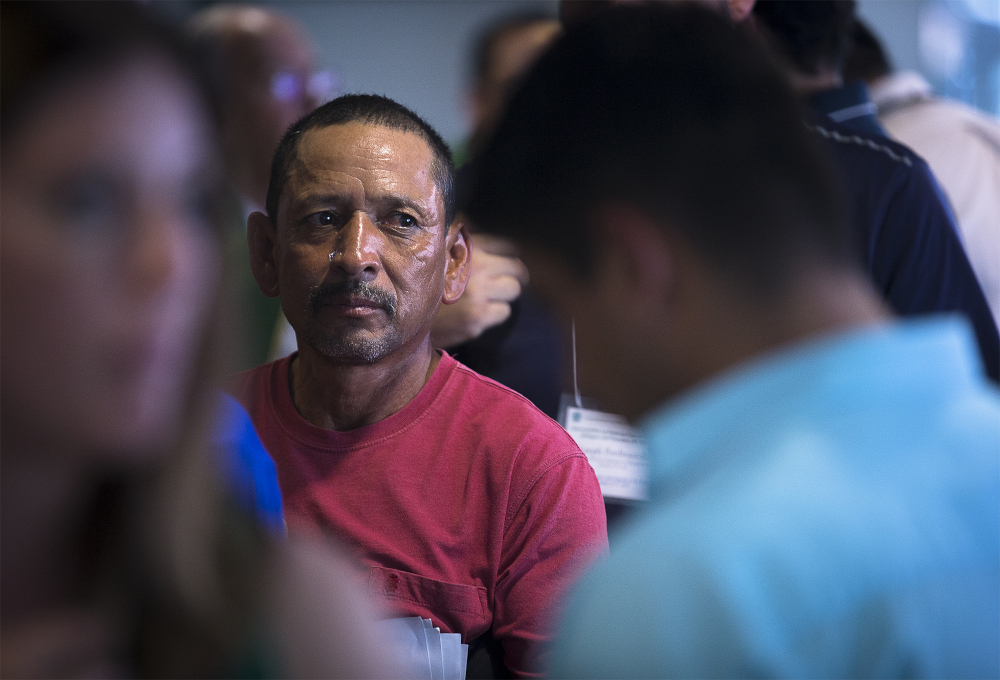 A farmworker receives Communion during Mass at the Centro Sin Fronteras in El Paso, Texas, Sept. 25, 2019, which was part of a pastoral encounter by U.S. bishops with migrants at the border. The Sept. 23-27 pastoral visit, sponsored by various offices of the U.S. Conference of Catholic Bishops and other national organizations, aimed to highlight the church's ministry to migrants, the border conditions and immigration laws affecting them, and their material and spiritual needs. (CNS/Tyler Orsburn)

In anticipation of the 2019 World Day for Migrants and Refugees, a group of bishops, women religious, lay ministers and others interested in the plight of migrants spent the days prior to the Sept. 29 observance listening to tales of hope, dashed dreams, resilience and uncertainty that are in abundance among migrants in this border region.

The daily struggle here does not involve strife between the neighbor cities of El Paso and Ciudad Juarez on the Mexico side, but of keeping up with the policies, mandates and rules directed out of Washington causing chaos in their midst.

Anna Gallagher, executive director of the Catholic Legal Immigration Network, known as CLINIC, admitted to the group Sept. 25 that even she had a hard time figuring out what exactly was happening at the border.

"What I saw and heard these past two days in Juarez ... I've been an attorney for 30 years and I am confused daily," in terms of understanding changes in policy and figuring out which communities can be helped, she said.

The newest development is the recent arrival of 1,750 Mexican nationals at the U.S.-Mexico border seeking asylum in the United States after a spate of violence drove them north. The wave came even as Mexico, under pressure from the Trump administration, declared itself a "safe third country," where Central America migrants can apply for asylum instead of heading to the U.S.

It's hard to know what can be done because, under the Trump administration, asylum into the U.S., for anyone, seems to have come to a halt.

And there is a suspicion and fear among pro-immigration circles that it's just one of several programs that help migrants enter the U.S., which soon will face an end.

"We're very worried about refugees who are stuck in Ciudad Juarez," said El Paso Bishop Mark Seitz during a Sept. 25 news conference outside the Border Farmworkers Center in El Paso.

Most have traveled together during a week of visiting various groups of migrants: those in Mexico who have not been allowed to apply for asylum in the U.S.; young migrants with families in both countries; and others on their way back to their countries of origin after losing hope of having their stories of fear be heard.

Cantu said during the news conference, explaining some of the experiences of the visit, that it was devastating to see the end of the migrants' dreams, "dreams that my own parents had as immigrants to the United States from Mexico some 60 years ago."

"We know they're coming, not to take advantage of this wonderful generous country, but rather to have an opportunity to work and to raise their families in safety and dignity," he said. "We continue to, as a church, to advocate to our elected officials ... for comprehensive immigration reform. ... It doesn't look politically possible at this time, but we continue to advocate for that. It's the right thing to do to uphold family unity and human dignity."

Faced with the reality that little can be done in the face of an administration that seems intent on keeping migrants out, the bishops, too, seemed intent on providing the vulnerable migrants the only thing they could: themselves.

They listened to their worries, prayed with them, blessed them, and assured them that God and the Catholic Church, in the U.S. and elsewhere, would remain with them.

And that seemed to be enough for some of those facing the unfolding drama each day.

"We don't want you to save us. We can save ourselves," Carlos Marentes, a labor organizer for farmworkers, told the bishops and those with them after they shared a meal with agricultural workers Sept. 25. "Pray for us. We continue to struggle, but we have hope that one day things will change."

During his homily at a Mass celebrated at the farmworker center, Victoria's Cahill assured those in the room that the Catholic leaders from throughout the country had traveled to the region just to be with them, "from Washington, the state, and from Washington, D.C."

He told them of a Nicaraguan woman he had met in a parish during the visit who shared her immigration story, which was still unfolding because she had not yet been allowed to enter the U.S. with her two children after receiving threats in her home country because she opposed the government.

She wanted to enter the U.S. but was denied the opportunity, and instead found herself alone with no money and nowhere to go in Ciudad Juarez until members of the Catholic Church stepped in to help. She shares a house with other migrant women and together they give each other comfort.

She said even though the journey had been a difficult one, "angels" appeared along the way to help, Cahill told the gathering.

Those she described as "angels," the bishop said, would be better described as "missionaries and disciples, people with Jesus Christ in their hearts ... people who had the courage to help the neediest." But the Nicaraguan woman, too, was a missionary and a disciple because she had proclaimed the "good news." 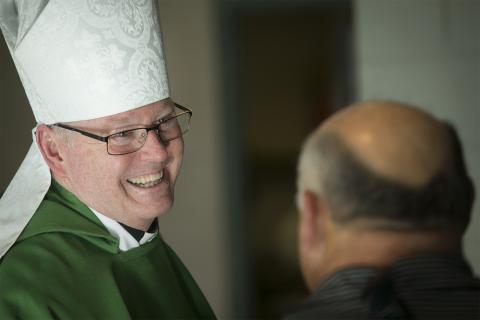 Bishop Brendan Cahill of Victoria, Texas, greets a visitor prior to celebrating Mass at the Centro Sin Fronteras in El Paso, Texas, Sept. 25, 2019, which was part of a pastoral encounter by U.S. bishops with migrants at the border. The Sept. 23-27 pastoral visit, sponsored by various offices of the U.S. Conference of Catholic Bishops and other national organizations, aimed to highlight the church's ministry to migrants, the border conditions and immigration laws affecting them, and their material and spiritual needs. (CNS/Tyler Orsburn)

"Each story is a sacred story," Cahill said. "And each story, if we listen, reveals the power of Jesus Christ and the power of the Holy Spirit."

As the Catholic Church approached the World Day of Migrants and Refugees, the stories heard along the border help to point out "that migrants and refugees are a gift and an encounter with God," the Vatican's Stark said in an interview with Catholic News Service Sept. 25.

Those who help migrants and refugees talk about how their work changes their lives, he added.

In turn, those refugees help others, they minister to others and become caregivers, too, Stark said.

"We all minister to each other. We're all wounded. We're all vulnerable. We're that field hospital that Pope Francis talks about, where everybody's wounded and everybody's called to be a healer," he said. "Sharing that vulnerability, we become nourished ... we encounter God. He offers us this special encounter that gets us moving. that gets us growing, and there we find hope."