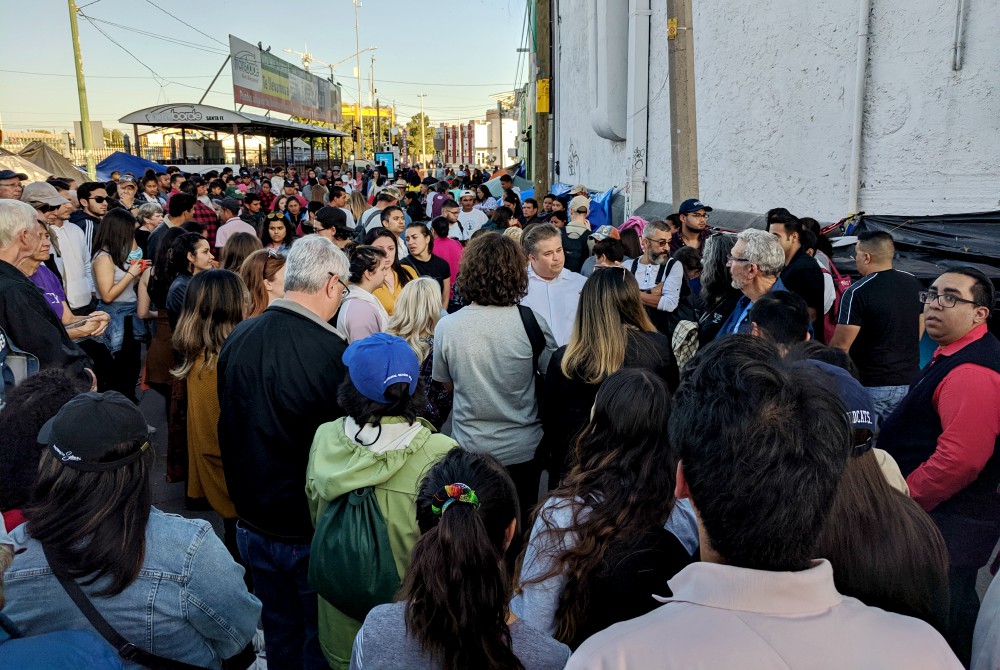 When Catholic immigrant activists, part of the DC Catholic Coalition, participated in a civil disobedience action at the Russell U.S. Senate Building in Washington last July, more than 200 showed up to protest the separation of immigrant families and detention of children at the border. 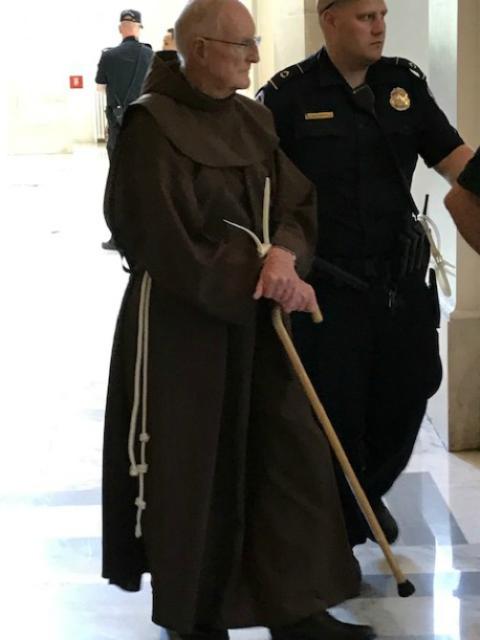 One of the most striking visuals of that day was that of Franciscan Fr. Joseph Nangle — an 87-year-old with a walking stick — who was handcuffed by the U.S. Capitol Police and ushered out of the building.

Nangle is among the growing number of Catholic religious and laypeople who are actively participating in civil disobedience movements across the country, protesting what they say is inhumane treatment of immigrants at the U.S.-Mexico border.

"When I was approached for this initiative, there was no question of me not being there. It was a matter of my love for the people — the children and separated families," said Nangle, who spent 15 years as a missionary in Latin America.

The past year has been especially prolific for Catholic social activists and leaders from various coalitions. Through rallies, marches and civil disobedience movements, they put a focus on immigration issues.

"We need to challenge some of our comforts, some of our privileges, and maybe risk some of our status with our own fellow Catholics, and for our own access to political leadership," said Eli McCarthy, professor at Georgetown University and director of Justice and Peace for the Conference of Major Superiors of Men, a national network of Catholic men religious leaders.

The recent Catholic social justice movement grew as a response to reports of immigrant children detained at the border, kept in cages and traumatized.

While Catholics have long been involved in lobbying and other efforts to bring about change in immigration laws, what's different are the risks they are now taking to highlight the plight of migrants.

The Sisters of Mercy of the Americas have also been actively involved in this movement.

Having worked with immigrant and refugee communities from Maine to California, they've seen firsthand the suffering due to the country's broken immigration policies. The sisters have even been arrested at various demonstrations.

Jean Stokan, justice coordinator for immigration and nonviolence for the Sisters of Mercy of the Americas, explained that their actions come from a place of "deep compassion and a sense of mercy."

"They were asking to do something more — something that's bolder and that could help wake up the people of the United States to the suffering of immigrants. The cruelty is compelling us to take greater risks," said Stokan.

Since the demonstration in D.C., a coalition of pro-migrant groups have organized protests outside the U.S. Immigration and Customs Enforcement office in Newark, New Jersey, in September, and in October at the U.S.-Mexico border in El Paso, Texas. For the October protest, the DC Catholic Coalition joined hands with the Latinx Catholic Leadership Coalition — an initiative started by Hispanic Catholics consisting of scholars, theologians, ministers and community organizers.

For McCarthy, collaborating with the Latinx leadership was exciting. "There's a lot of local organizing that has been happening among Catholics — from Chicago and New Jersey to El Paso and other towns across the U.S. This created a space where they could feel more connected and share the work they were doing with the group," he said.

At El Paso, dramatic scenes played out in front of the Border Patrol, as the group called for an end to the Trump administration's Remain in Mexico policy. Ten Catholic leaders from various coalitions accompanied 15 Mexican asylum seekers as they presented themselves for asylum.

Griffin Oleynick, one of those accompanying the asylum seekers, described a tense 30-minute stand-off with Border Patrol agents before the immigrants were allowed to enter the U.S. and apply for asylum.

Kathy O'Leary, regional coordinator of Pax Christi New Jersey, has been an immigration activist for more than 20 years. She's been working tirelessly to expose the dismal conditions of detention centers across New Jersey. O'Leary says that the groundswell of grassroots support for immigration reform wasn't around a few years ago. But everything changed after the election of Donald Trump.

"President Obama's immigration policies criminalized the community. It's not just Trump. But now people are more active about the issue and are paying attention. So we get to educate them about the whole history of discriminatory immigration policy," said O'Leary.

The organizers draw deeply from their Catholic faith and Pope Francis. "The basis of Catholic social teaching is that every human is a child of God. We need to be preferential towards the poor in everything we do," said Nangle.

They are also heavily influenced by the works of the Rev. Martin Luther King Jr., Mahatma Gandhi and Nelson Mandela. Activists use similar methods to create nonviolent moments, where the injustice and violence of one side is clearly manifested when compared to the nonviolence of the other side. "This is very important, as it can be pivotal in shifting policy and bringing social transformation. We've been trying to create those moments and will continue to do so," said McCarthy.

In the current culture of demonizing migrants, the activists say they work toward lifting the dignity of people while resisting injustice.

"Our work is all about giving people hope. And what's more Christian than hope?" said O'Leary.

Going forward, the activists see the movement getting more Catholic. They foresee Catholics willing to engage politically and prioritize immigration at a higher level while voting. To this end, organizers are working on a strategy to encourage Catholics to not only vote "but think critically about the process and the broad range of Catholic social teaching, particularly immigration," said McCarthy.

"I think the messaging from the [Democratic] candidates is going to improve regarding immigration and it should have an impact on the overall political discussion," he said.

With the upcoming presidential elections, anti-immigrant rhetoric is expected to increase. But the organizers are ready to counter that with larger Catholic actions in the coming months.

"Through prayers, use of transformative symbols like the crucifix and the presence of notable religious leadership, we hope to increase the visibility of Catholics and bring change," said McCarthy.

However, Nangle wants more U.S. bishops to support activism. "With the exception of a few, by and large, our bishops have been too silent. They do make statements out of the U.S. Catholic bishops' conference and some of them are quite good. But many of them are not prophetic. They make statements, but we need more action," he said.

A version of this story appeared in the Feb 21-March 5, 2020 print issue under the headline: Immigration activists step up in battle against Trump policies.