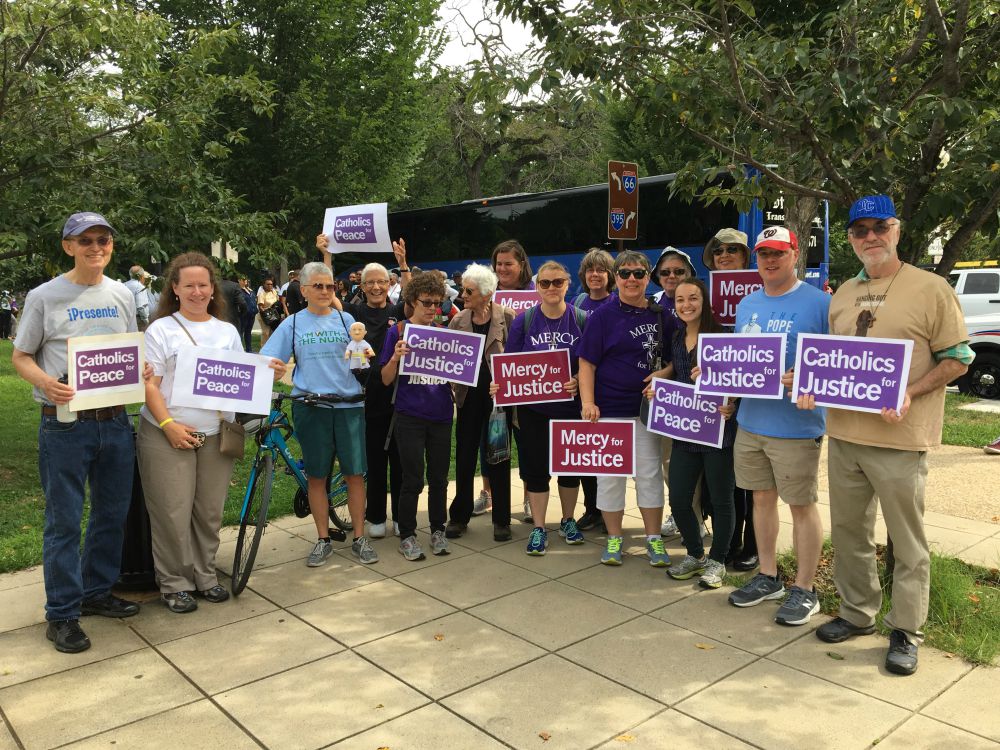 A crowd of about 5,000 people gathered on the morning of Aug. 28 near the Martin Luther King Jr. Memorial, adjacent to the National Mall in Washington, D.C., for a rally and march billed as "one thousand ministers march for justice." The event, sponsored by the National Action Network, drew faithful from across the religious spectrum, including Catholic, Jewish and Protestant denominations.

The march and rally were held on the 54th anniversary of the historic March on Washington for Jobs and Freedom, at which King gave his iconic "I have a dream" speech. The events were meant to highlight how much more work remains to be done for social justice and civil rights — notably voting rights, healthcare, criminal justice reform, and economic justice — and the importance of religious leaders reaffirming their commitment to that struggle.

Speakers before the march — which wended through Washington's streets, past the White House and the Trump International Hotel, ending at the Justice Department — included the Rev. Al Sharpton, who founded the National Action Network in 1991, and Notre Dame de Namur Sr. Patricia Chappell, executive director of Pax Christi USA. 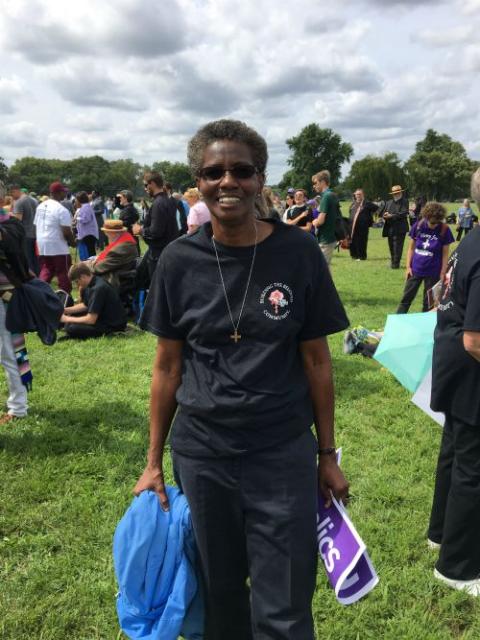 Chappell ended her brief, impassioned remarks with a call for peace and racial harmony. "We run and travel as one," she said, asking for an "amen." The crowd happily obliged her.

"We, as a Catholic community, will move this conversation to another level, having faith and race dialogues in parishes, congregations, among clergy, and nationally, standing in solidarity and advocating along with our brothers and sisters for peace and justice," she told NCR after her speech to the crowd and before the march began.

"The Catholic Church can no longer put our heads in the sand and remain silent," she added. "We are called to build the beloved community." The line is a reference to King, and it was emblazoned on the back of the blue T-shirts Pax Christi members wore to the march.

Other groups from the Catholic community taking part in the march included the Sisters of Mercy, the National Advocacy Center of the Sisters of the Good Shepherd, the Franciscan Action Network, the Maryknolls, the Columban Center for Advocacy and Outreach, and the Conference of Major Superiors of Men.

About two dozen of them carried purple signs that read "Catholics for Peace" on one side and "Catholics for Justice" on the other. Most were from the Washington area, but a group of Mercy sisters came from Alamo, Texas, getting out of the state just before Hurricane Harvey struck.

"The idea is justice and peace for everybody," said Mercy Sr. Rose Weidenbenner, who works at the Arise Support Center, which reaches out to families in the colonias along the U.S.-Mexico border, providing educational and leadership development opportunities. 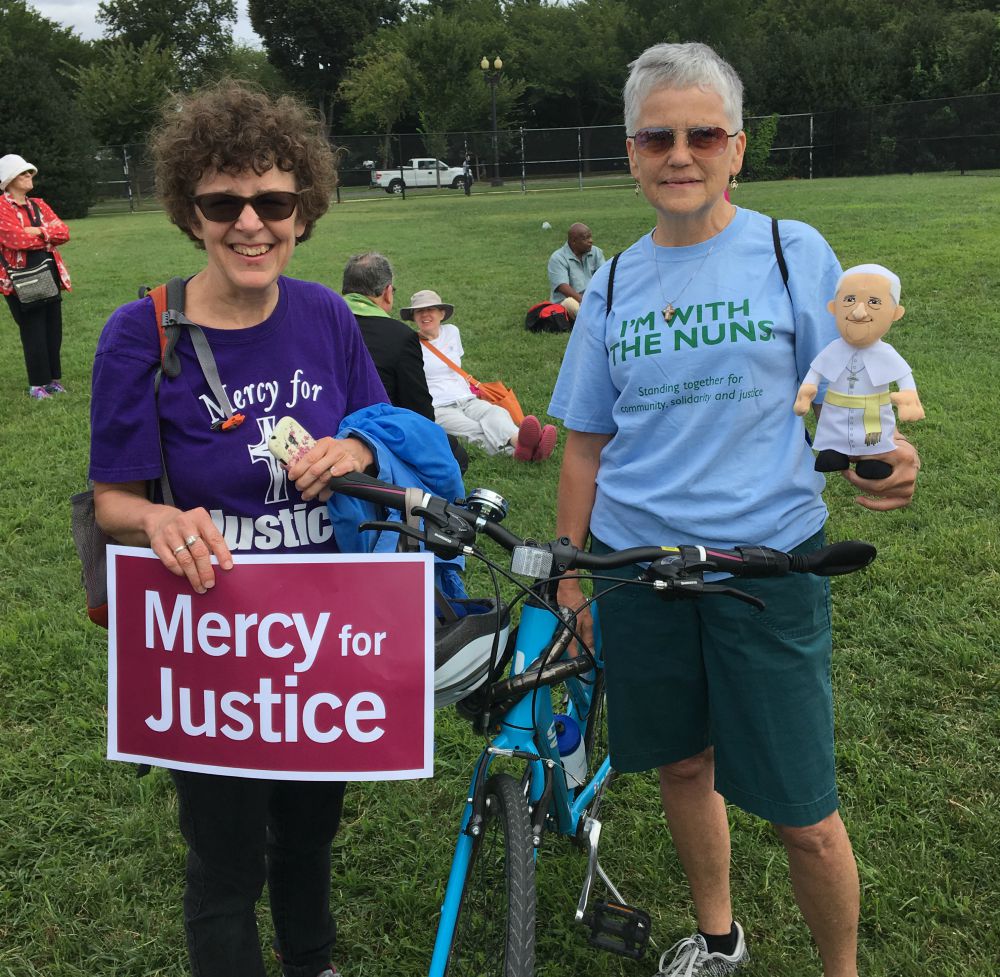 Marianne Comfort, left, who works with the Sisters of Mercy Institute Justice Team, and Jean Sammon, who is retired from NETWORK and is now active with Pax Christi, at the rally before the ministers' march (Julie Bourbon)

Weidenbenner's sister (biological, not congregational) flew from Kansas City to meet her at the march. Mary Buren, a hospice nurse, spent her vacation in Washington sightseeing, visiting her daughter, and marching.

"God tends to lead me where I need to be," said Buren, as she observed the crowd. "It's good to see there are so many people who preach God's love and live God's love."

A number of the Catholic participants lamented what they felt was an inadequate showing of public Catholic solidarity after recent events in Charlottesville, Virginia, where a white supremacist demonstration earlier this month resulted in the death of a counter protestor.

Marie Dennis, co-president of Pax Christi International, said she has been in the business of protesting for many decades.

"Catholics have a record of being visible in the streets, as we are today, and being open to deep, meaningful reflection about what it means to be faithful. These are hard questions," she said, noting that she was at an interfaith prayer service in Charlottesville on Aug. 11, before events took a violent turn in that city. "It was a strong, vibrant, alive, important statement of solidarity."

"One of our priorities is a more peaceful and just world, and it feels like we're moving in the opposite direction," she added, reflecting on the necessity of coming out to support the call for justice. Dennis also suggested that Catholics weren't as well represented at the Washington march as other denominations because the call had specifically been directed to ministers and clergy, thus leaving Catholic women out of the equation.

There were many women in clerical collars and ministerial garb from other religious traditions taking part, as well as people wearing T-shirts and carrying posters supporting the LGBT community and the Black Lives Matter movement. One woman carried a sign asking, "What would Jesus do?" on one side, with answers and Gospel citations on the other that included, "Provide accessible, affordable, and just healthcare — Luke 4:18. 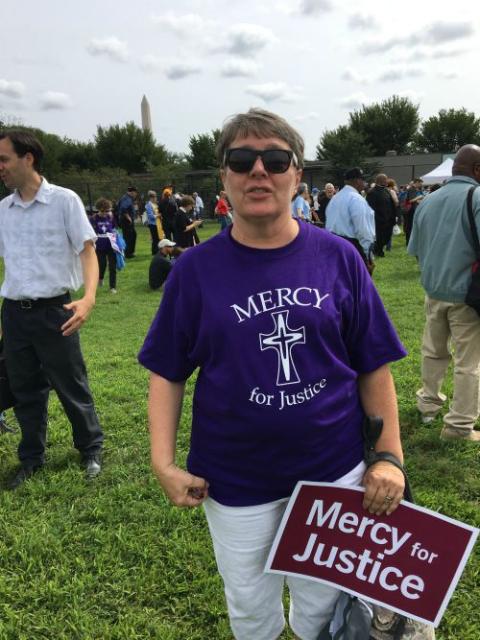 Overall, the mood was festive and the weather pleasantly mild for a late August day in the nation's capital. As the marchers filed out of the gated field and onto the street, they became a blocks-long procession that periodically broke out into "We shall overcome" and chants of "No justice, no peace."

"It's important for us to join with other faith leaders and reclaim the power of faith," said Mercy Sr. Pat Flynn, who just moved to the Washington area from Rhode Island to work as part of the Sisters of Mercy Institute Leadership Team in Silver Spring, Maryland.

That act of showing leadership and staking out a moral position in the current political climate was on many minds.

"I think we're here to reaffirm the dream of a civil society, from a faith perspective," said Scott Wright, director of the Columban Center for Advocacy and Outreach. "By our solidarity, we say that we will stand together."