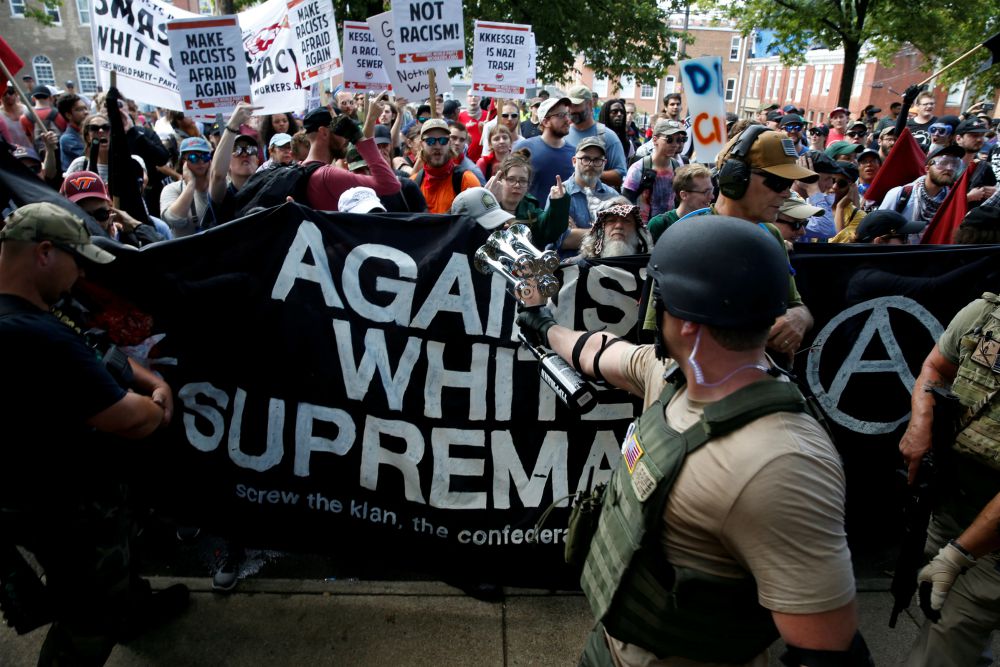 White nationalists are met by counter-protesters in Charlottesville, Va., Aug. 12 during a demonstration over a plan to remove the statue of a Confederate general from a city park. (CNS/Joshua Roberts, Reuters)

Since white supremacists and neo-Nazis marched in Charlottesville, Virginia, on Aug. 12, Catholic leaders have issued sharp condemnations of racism and violence, created a new ad hoc bishops' committee against racism, organized prayer services, and provided homily tips to address racism from the pulpit.

But those who have been involved in anti-racism work since long before Charlottesville know that such moves made in the immediate aftermath are only the first step. Lots of hard work lies ahead, and the Catholic Church is already a bit behind.

"It's not enough to issue a statement," says Resurrectionist Fr. Manuel Williams of Montgomery, Alabama, who nonetheless praised the statement from Cardinal Daniel DiNardo, president of the U.S. Conference of Catholic Bishops, for being forceful and direct in its condemnation of racism and white supremacy.

Speaking out is important, Williams and others say, since not to speak against acts of white supremacy and racism is viewed as approval.

"But I'd like us to be as proactive and organized on issues of race and class, as our bishops and organizations have been on what they see as prolife issues," said Williams, pastor of Resurrection Parish in Montgomery.

The Catholic Church has not historically been a strong moral leader on racism, especially when compared to its condemnation of other issues. Case in point: the U.S. bishops' last pastoral letter on the issue was nearly 40 years ago, despite rising racial tensions in recent years. (The bishops did release a statement on race relations during their meeting in St. Louis in 2015.)

"How much more needs to happen before we really are on the forefront of social change?" asks Timone Davis, assistant professor at the Institute of Pastoral Studies at Loyola University Chicago and treasurer of the Black Catholic Theological Symposium.

"I don't think we as a church are out front enough on this issue, leading the charge," she says. "I've read a couple things [Catholic leaders] have said. But at this point, we've had enough talk. When do we do what they've already written about?"

Words are important, but not enough, racial justice advocates say, when the situation is this serious — when Ku Klux Klan members feel emboldened to march in the streets without hiding their faces, and political leaders equate those who stand up for justice with white nationalists.

"Everyone is saying the right things," Kim Lymore says, though she believes a new pastoral on racism from the U.S. bishops is "long, long overdue." Lymore is an associate minister at St. Sabina Parish in Chicago and director of the Augustus Tolton Pastoral Ministry scholars program at Catholic Theological Union.

"But where the statements have fallen short is what actions to take from here," Lymore says. "Prayer is good, but is it enough? I don't think so. What are we going to do to eradicate this sin of racism?"

To address the issue, the U.S. bishops on Aug. 23 created an ad hoc committee against racism, chaired by Bishop George Murry of Youngstown, Ohio.

Creating a committee may be a start, but despite the bishops' insistence that an ad hoc committee is "the highest structural response possible," not all Catholics were impressed. And an "ad hoc" committee implies a response to a specific, limited problem, rather than a broader attack on racism in the country and the church.

Still, some see Catholic leaders' strong language as a step in the right direction.

Related: Black Catholics called to 'change the narrative' about race in America

Chappell also believes naming racism as "sin" — as many statements from bishops, religious orders and other Catholic leaders have done — is important. "And in naming it, we also have to be open to the pain, the rage and the sorrow that people have experienced because of that sin," she says.

Still, statements could have gone further in confessing the church's complicity in racism, critics say.

"Racism affects the very fiber of being of the body of Christ," says Redemptorist* Fr. Maurice Nutt of New Orleans, co-convener of the Black Catholic Theological Symposium.

"The Catholic Church in America needs to have an examination of conscience that looks at our own racist attitudes and behaviors," says Nutt. "Why is it that many of our chanceries mostly have mostly white people in them?"

Nutt also was disappointed not to see Catholic clergy in the forefront of counter-protests at Charlottesville and since, although "that doesn't mean that Catholic laity of goodwill weren't there," he says. 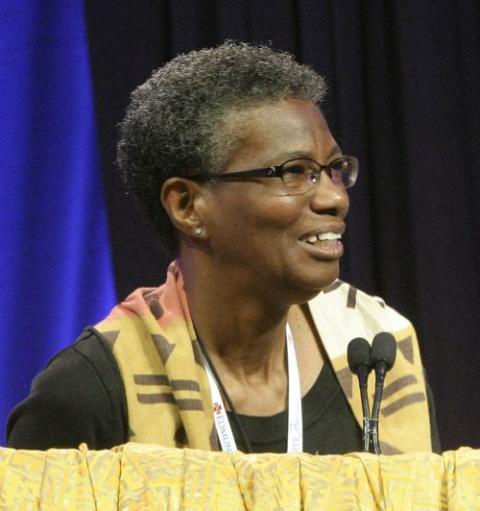 Nonviolent public protest is one effective response to racism because it raises awareness. "That's how the civil rights movement worked," says Lymore, who praised the young activists of the Black Lives Matter movement. "They are the next generation that's going to be leading the church."

Those who work for racial justice urge other, concrete actions, as well.

Nutt suggests a letter against racism be read at every Mass, "so all Catholic Christians would hear the same statement from the bishops," he says. "Those things need to be said clearly and without equivocation."

Williams suggests the presbyteral council in every diocese work to connect predominantly white parishes with those whose members who are predominantly people of color, to facilitate interracial dialogue.

Unfortunately, no one magic remedy will cure racism, and the problem is complex. "But we've got to stop letting the fact that it's such a huge problem paralyze us," says Auxiliary Bishop Fernand Cheri of New Orleans.

Cheri, who was ordained a Franciscan priest, has been encouraged by statements from some white church leaders. "As a black bishop, I can only say so much to white Catholics. … Some white folks are not going to listen to black folks. You can talk until you're blue in the face and get nowhere," he says. "So white religious leaders need to stand up and say to white folks, 'Enough is enough.' "

His calling is to minister to black Catholics, so they do not internalize racism and lose hope. "I need to put my energies toward enabling black folks not to fall victim to the racism that is before them and give up, but to keep on believing that what we profess as followers of Christ can be real," Cheri says. 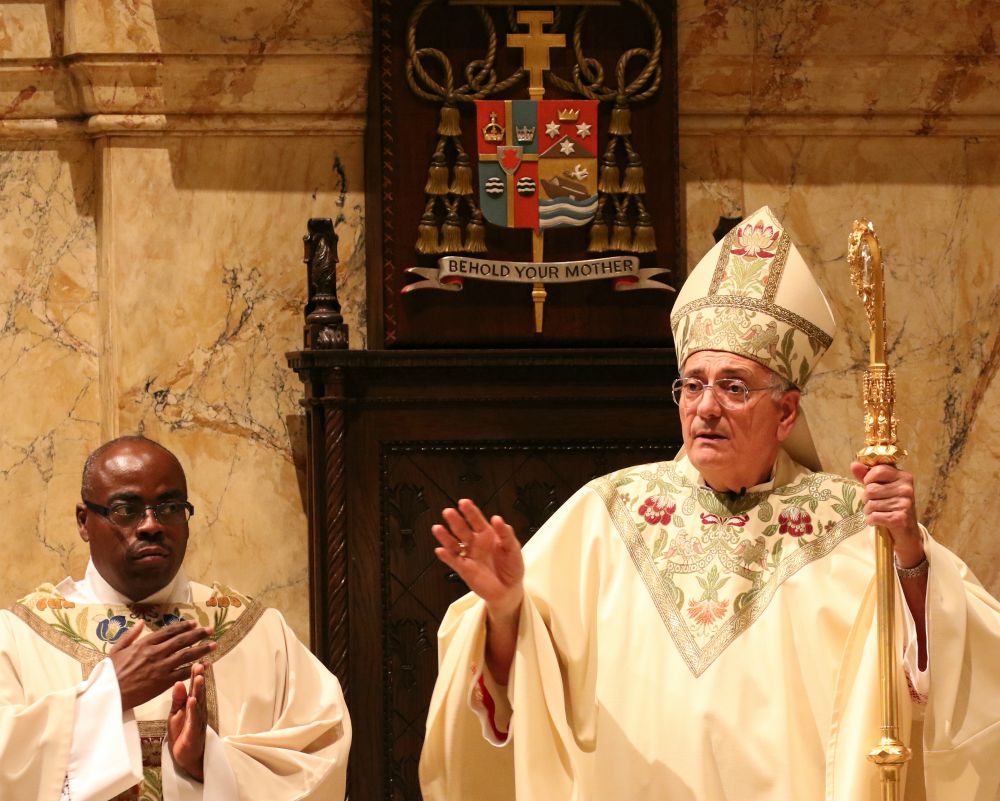 Bishop Nicholas DiMarzio imparts a blessing at the end of a Mass for solidarity and peace Aug. 24 at St. James Cathedral Basilica in Brooklyn. The liturgy was celebrated in response to the violent and deadly white supremacist demonstrations in Charlottesville, Virginia. (CNS/Gregory A. Shemitz)

Nutt agrees that it's not the job of African Americans to fix the problem of their own oppression. "White folks need to do their work," he says. "To ask those who have to constantly deal with racism to bring the solution is not appropriate."

Nadeau, of Pax Christi, encourages other white Catholics to examine their own white privilege. "We are the ones, as white people with our privilege, who are keeping racism alive and well in this country," she says. "We have not looked into our own internalized racial superiority."

Meanwhile, people of color must deal with their own internalized racist oppression, says Chappell. "It takes work, with prayerfulness and consistency," she says. "But transformation can be achieved."

Since real change must happen within people's hearts, the church can help offer a spiritual response to what many see as a spiritual problem. Bishop Cheri says Catholics have to live as if they believe the words of the Eucharistic prayer that say we are "co-heirs to eternal life."

"If we recognize that we're all co-heirs, then we have to put into action what we profess," he says.

Davis believes now, more than ever, "This is Gospel time," she says. "This is the time for Christians to profess their faith and proclaim it into the world."

In fact, the church, as a multi-ethnic and multi-racial institution, is poised to lead on this issue. In the St. Louis Archdiocese, after lessons learned in the wake of a racially-charged police shooting and subsequent protests in Ferguson, Missouri, that's exactly what happened.

After Ferguson, the archdiocese re-evaluated how ministries were serving families in communities of color, says I. Lynn Squires, president of the board of director of the St. Charles Lwanga Center, the archdiocesan Office of Black Catholic Ministries.

Ultimately, however, real change comes from dialogue and relationships with those who are different. "That's when perception changes, when you actually get to know people and acknowledge them for their existence as individuals, not as a demographic group," says Squires. "It's harder to hate an individual than a group. A group is anonymous. Individuals have hearts and souls. You hold their hand during the 'Our Father.' You can't hate that."

But often such dialogue and relationship-building is stymied because parishes tend to be racially segregated. And "forced" dialogue can have an element of voyeurism by whites. "Communities of color are tired of telling their stories, and nothing happens," says Nadeau. 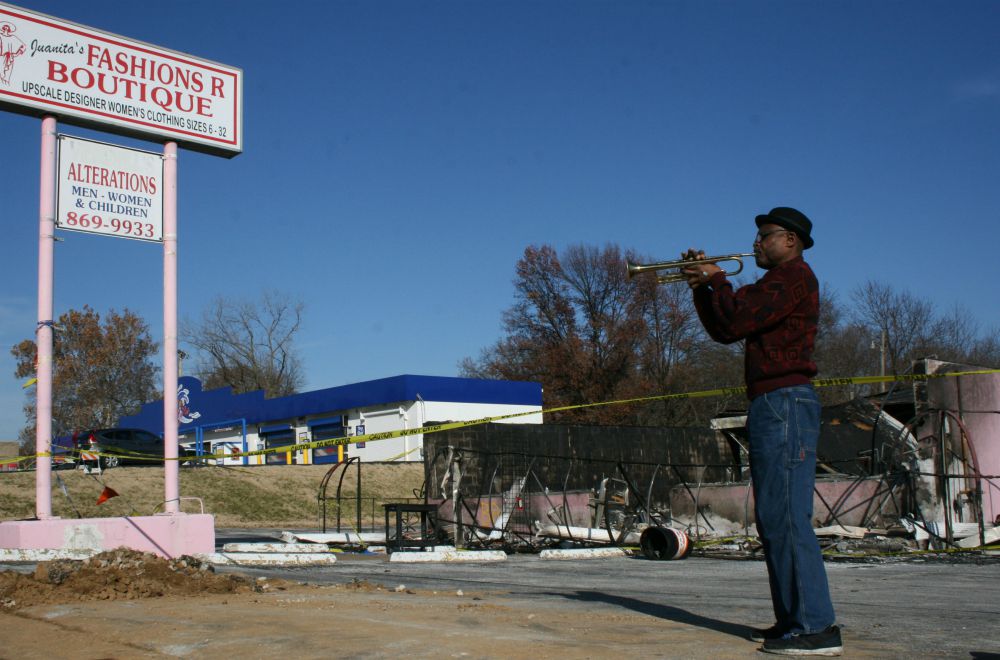 As the violence of Charlottesville fades from memory and the media moves on to the next big story, African American communities will continue to face the day-in, day-out realities of racism.

Squires says she is afraid of what comes next, which may "make Charlottesville look like a peace rally," she says. "The issues surrounding race are still ingrained in our society and will continue to surface, especially if those in positions of leadership continue to ignore, make excuses and often justify this divisive behavior."

Others are hopeful that the issue will have some staying power, in part, because the woman who died in the violence at Charlottesville was white. "That shot this issue way to the top of people's awareness," says Davis. "I don't think it's going to go away, not this time."

The church needs to "stay woke," says Nutt, quoting a phrase common among millennial protesters. "We must stay ever-vigilant about racism," he says. "Statements and pastoral letters will only be momentary. It's easy to have a flash of concern, then go back to the status quo."

Instead, the church should address racial injustice with a proactive, rather than reactive, stance. Says Lymore: "We have been living this all our lives."

*This article has been edited to correct Fr. Maurice Nutt's religious order.

A version of this story appeared in the Sept 8-21, 2017 print issue under the headline: Words are not enough.