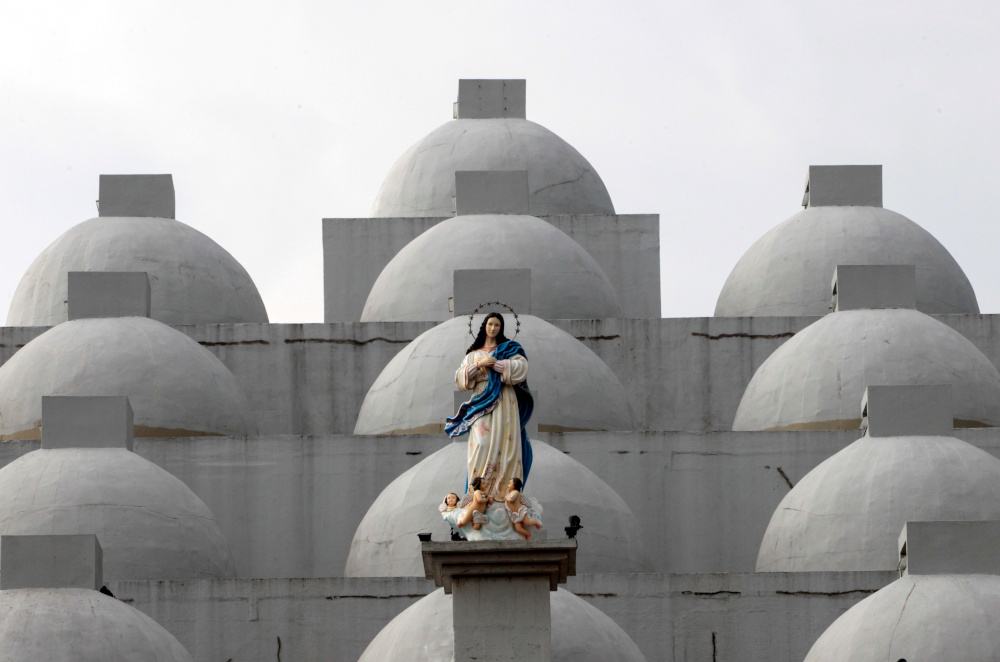 A statue of Mary is seen in 2017 atop the Cathedral of Managua in Nicaragua. On Nov. 18, 2019, a pro-government mob entered the cathedral, damaging property, attacking hunger strikers inside the building and jostling a priest and nun, the Archdiocese of Managua said. (CNS/Reuters/Oswaldo Rivas)

Nicaraguan church authorities have reclaimed control of Immaculate Conception Cathedral in the national capital, Managua, after a pro-government mob burst into the building, which was hosting a group of mothers holding a hunger strike to demand the release of the political-prisoner children.

The Archdiocese of Managua said in a Nov. 19 statement that the mothers inside the church were taken to another location by the Red Cross and accompanied by the cathedral rector. Worship and pastoral activities were to resume Nov. 21 at the cathedral.

The mob entered the cathedral Nov. 18, damaging property, attacking hunger strikers inside the building and jostling a priest and nun.

An Archdiocese of Managua statement issued Nov. 18 after the incident said Lopez and Sister Arelys Guzman, the cathedral administrator, "are fine, but had to leave the church to protect themselves."

The statement added that the mob broke various locks in the cathedral and "profaned" the building.

"We condemn these acts of sacrilege, harassment and intimidation, which do not promote peace and stability in the country," the statement said.

"We ask President Daniel Ortega and the vice president to take immediate actions so that all our churches are respected and, at the same time, the national police withdraw its troops, who are besieging and intimidating the cathedral and our parishes," it said.

On Nov. 19, the Nicaraguan bishops' conference issued a statement: "We exhort those responsible for this siege to change their posture. Nicaraguans have already suffered too much pain. The families being besieged are suffering twice due to the lack of freedom for their imprisoned loved ones and, now, the state of siege which threatens their lives."

Nicaragua erupted in protests – which have since been violently suppressed – in April 2018 as students and many in the population demanded Ortega's ouster. The church tried to convene a national dialogue, but found the process futile as the Ortega regime refused to allow new elections and ramped up its repression on protesters -- and those providing them with humanitarian assistance or spiritual support, including doctors and priests.

"On the part of the government, (dialogue) is no longer possible, though all other sectors (of society) are in agreement," said Msgr. Carlos Avilez, spokesman for the Nicaraguan bishops' conference.

"We do not have any power, and the government does whatever it wants with the church and with whomever it wants to do things to," he added Nov. 20.

Videos uploaded to social media showed police attempting to enter the Jesuit-run Central American University in Managua, where students have protested the Ortega regime. "The church is respected," students shouted Nov. 19 as police came to the campus gate, according to an account from the newspaper La Prensa.

Avilez said the government has cracked down on dissent – even inside traditional sanctuary spaces such as churches – out of "political arrogance," but also because of "the fear of allowing any kind of protest."

He added, "They know that if the last channel of protest is opened, everyone will try to go through it, and they don't want people protesting against them."

The attack on the cathedral came as police in the city of Masaya – just to the south of Managua – continued besieging a parish, where another group 11 of hunger strikers have been holed up inside.

Authorities cut power and water to the parish, and authorities arrested a group of 13 women for trying to take water to the hunger strikers in Masaya the weekend of Nov. 16-17. Women coming to pray the rosary at the church also were removed by police, Fr. Edwin Roman, pastor of St. Michael's Parish in Masaya, told Nicaraguan media.

Roman was forced to celebrate Mass Nov. 17 with the doors shut as the police siege continued. The previous day, he attempted to take families of political prisoners into the church for a Mass, but was blocked by police.