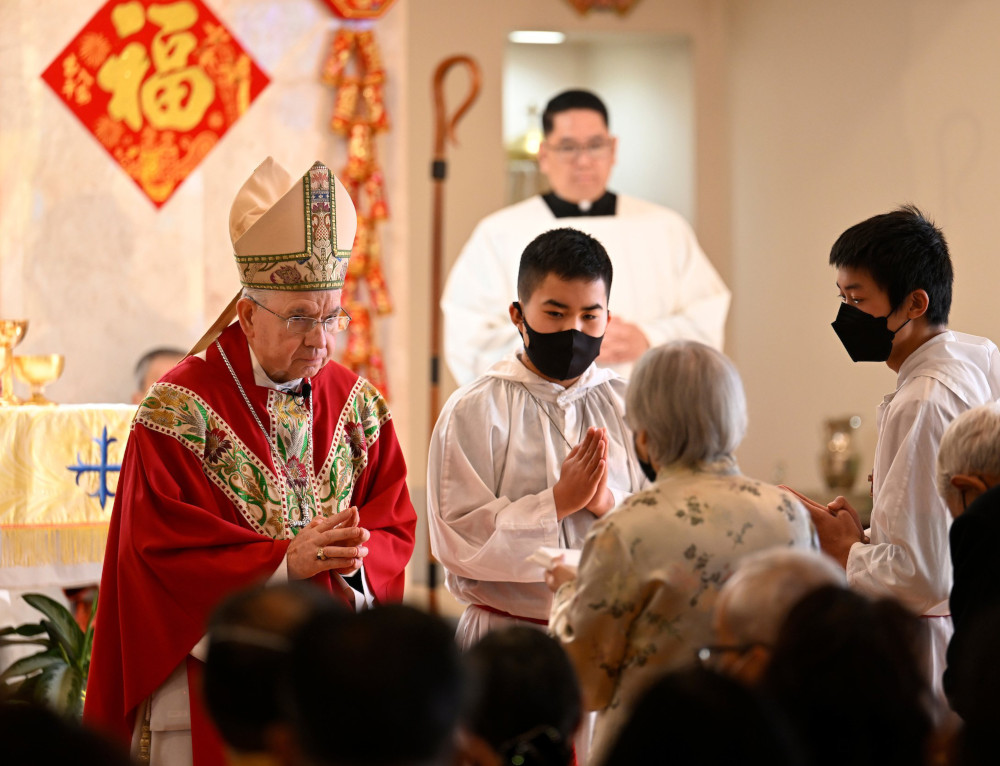 Local Chinese Catholics celebrating the start of the Lunar New Year at Chinatown's Catholic parish also prayed for the victims of the mass shooting in nearby Monterey Park the night of Jan. 21.

"We pray for those killed and injured in this shooting, and we ask that God stay close to their families and loved ones," said Archbishop José Gomez in his Sunday Mass homily at St. Bridget Chinese Catholic Church Jan. 22.

Gomez also blessed the parish's newly built "evangelization center" and presided over the renewal of vows for parish couples celebrating wedding anniversaries during the morning visit to St. Bridget, a small church in the shadow of Dodger Stadium just north of downtown Los Angeles.

But the celebration also was tinged with sorrow. That morning, parishioners had awoken to news of 10 people killed on the scene at a dance ballroom and at least another 10 injured in a late-night gun rampage in Monterey Park, a heavily Asian American city east of Los Angeles where thousands of people had gathered over the weekend for a two-day Lunar New Year festival.

On Jan. 22, one of the 10 injured died of her wounds after being transported to a hospital in critical condition, bringing the death toll to 11.

The suspect in the shooting was identified as 72-year-old Huu Can Tran after he was found dead in a Torrance parking lot Jan. 22 after apparently taking his own life. The Los Angeles Times reported that after the shooting in Monterey Park, Tran walked to a second dance studio in nearby Alhambra, apparently with the intention of shooting patrons there. But NBC News and other media reported that two community members on the scene disarmed him by grabbing his weapon and Tran fled and then was found in the Torrance parking lot. Police said they still did not know his motive for the shooting.

"It's a real gut punch," Darrel Ng said about the Monterey Park mass shooting. He grew up attending St. Bridget and had traveled from Sacramento to celebrate the Lunar New Year at the parish with his family.

Ng explained that for local Chinese immigrants, Monterey Park and Alhambra are considered suburbs of Chinatown, more residential areas that have welcomed more recent waves of Chinese immigrants. Most of the parishioners of St. Bridget are members or descendants of older generations of immigrants to L.A., particularly from Cantonese-speaking areas of China like Hong Kong.

"I'm glad that we have an event like this for us to be with each other, and to understand the strength of the community," Ng told Angelus, the news outlet of the Archdiocese of Los Angeles.

Engeline Wong lives in Alhambra but is an active parishioner at St. Bridget. She called the Lunar New Year Mass and Archbishop Gomez's visit "a double happiness," but said the shooting was on her mind during the Mass.

"Monterey Park is a very safe city," Wong said. "I never imagined something like this would happen there."

The Mass was celebrated with Scripture readings traditionally used by Catholics for the celebration of the Lunar New Year. The day's Gospel, a passage of the beatitudes from Matthew, seemed appropriate given the events hours earlier in Monterey Park.

"The beatitudes tell us we need to live and work with humility and purity. We need to have a simple lifestyle. We need to bring a spirit of mercy and forgiveness, and try to be peacemakers in our relationships," said Gomez in his homily. "They tell us that we need to care for people in our society, we need to have a heart for the poor, and compassion for the vulnerable."

They also, he added, tell us "that we need to live these values and these priorities, even if they are not popular or if they are opposed in our culture."

Traditional red Chinese decorations were placed both inside and outside the church for the day's festivities, and even the priests wore red vestments for the occasion.

The church was originally established in 1940 not as a parish, but as a mission center by Columban Fr. John Cowhig, an Irish priest who had previously served as a missionary in China. It was eventually taken over by Salesian priests and was formally recognized as a parish in 2000.

A Salesian priest and Hong Kong native, Fr. John Lam, 82, has been the pastor at St. Bridget's since 2006. He said his parishioners are used to praying for peace, especially in their homeland, where Christians have suffered decades of repression. On Jan. 23, he was praying for those killed in Monterey Park and for the conversion of the gunman.

"Unfortunately, this happens too often in the U.S.A.," said Lam.

Less than 48 hours after the Monterey Park shooting, seven more people were shot and killed in Northern California at two different landscaping nurseries Jan. 23 near Half Moon Bay, California, according to the San Mateo County Sheriff's Office.
The suspect, 67-year-old Chunli Zhao, was taken into custody after he was found in his car in the parking lot of the Half Moon Bay sheriff's office substation. He is believed to have acted alone.