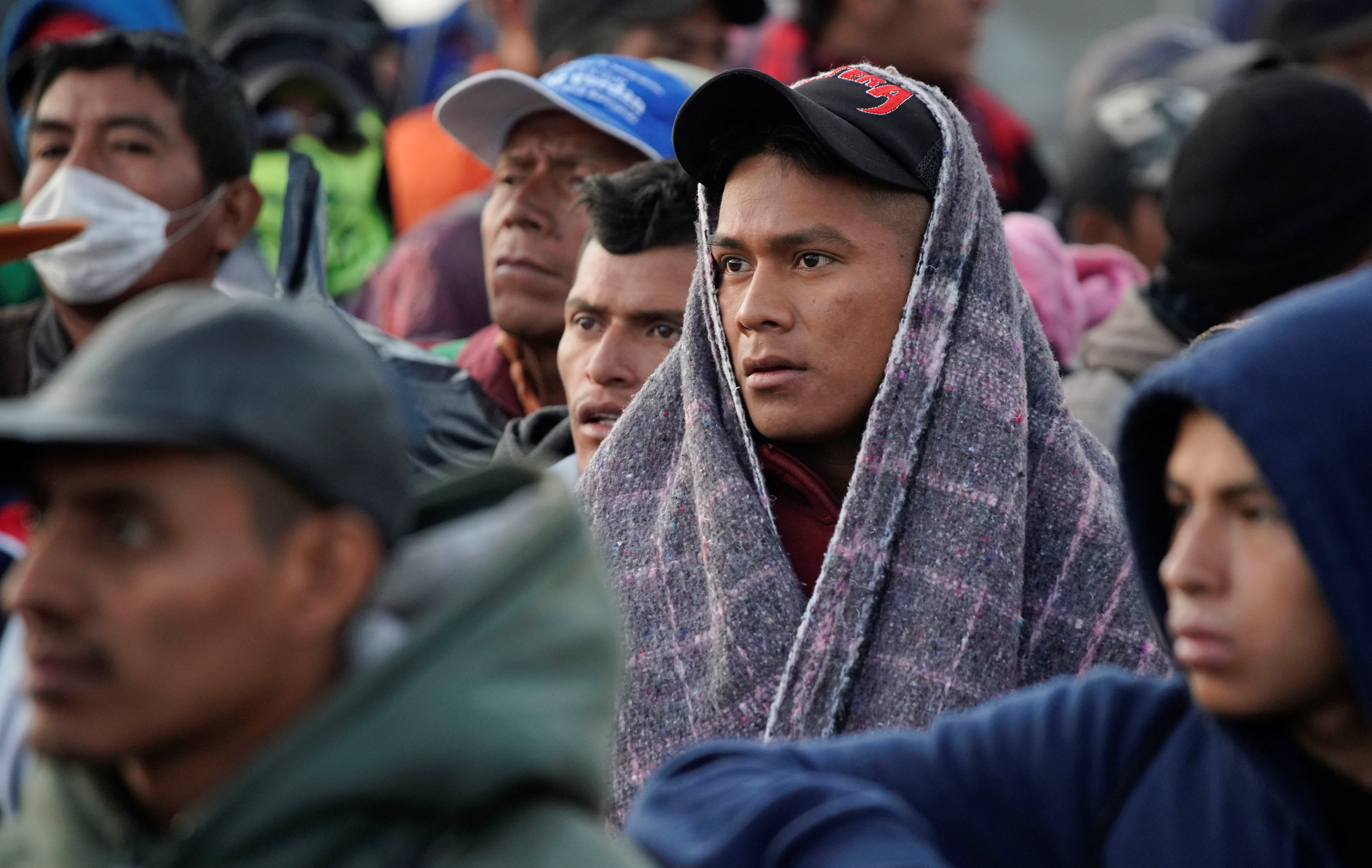 Migrants wait in line Feb. 4 to get into buses in Saltillo, Mexico, during their journey toward the United States. (CNS/Alexandre Meneghini, Reuters)

A dialogue about the immigration debate impasse, the night before President Donald Trump's postponed State of the Union address, began and ended on a hopeful note about the contribution immigrants make to this country and the obligation of people of goodwill to support fair and just immigration policies. A panel of Catholic and Evangelical experts at Georgetown University approached the topic from the angles of policy, morality and common sense.

Moderator John Carr, director of the Georgetown Initiative on Catholic Social Thought and Public Life, had assured the audience Feb. 4 that it wouldn't be a night of punditry from talking heads, and "Beyond the Wall: Human Impacts, Moral Principles, and Policy Directions on Immigration" delivered. The discussion was thoughtful and substantive.

"What is needed in this conversation is compassionate partnership," said Jaquelin Martinez, a Georgetown senior who shared her father Moris' journey from El Salvador to the United States to create a better life for his family. By way of introduction, Martinez, who is one of Georgetown's many DACA students (those who participate in the Deferred Action for Childhood Arrivals program), set the tone for the evening: unapologetically faith-filled and forward-looking toward solutions, not slogans.

Carr said he wanted the four panelists to go deeper into the issue of immigration, which he called "an emergency created by a lack of focus on the human and moral dimensions of this crisis." More than once, he and others referred to finding a way out of this situation, which he said would of necessity involve some compromise from both Republicans and Democrats.

"What is fundamental and what is prudential?" he asked. "What can we compromise on and what should we hold fast to?"

Or, more to the point, "The church is in crisis, the nation's in chaos. How can we use our voices to make a difference?"

The expert panel included Missionary of Jesus Sr. Norma Pimentel, executive director of Catholic Charities of the Rio Grande Valley; Galen Carey, vice president of government relations for the National Association of Evangelicals; Ashley Feasley, director of policy at the U.S. Conference of Catholic Bishops' Office of Migration Policy and Public Affairs; and Jesuit Fr. David Hollenbach, professor in the Georgetown School of Foreign Service and senior fellow at the Berkley Center for Religion, Peace, and World Affairs.

Pimental, whose agency runs the Arise Support Center for migrants in Alamo, Texas, spoke of realities on the border where she grew up. She noted, to the surprise of some in the audience, that there are places where already-existing border fencing stands a mile north of the Rio Grande River, bisecting and disrupting American communities.

She then praised the generosity of those communities, whose members "bring food to the bridge daily," for migrants forced to wait — now sometimes for months — in Mexico for their asylum hearings. "We are creating a crisis ourselves by forcing people to enter through more difficult and unsafe areas. We should be building up capacity for ports of entry."

Those unfamiliar with the Catholic position on immigration and asylum in the United States might be surprised that the church doesn't advocate open borders and mass, unchecked entries, Feasley said. That interpretation of Catholic social teaching lacks nuance and is not grounded in fact.

"We can keep the country safe but also talk about the fact that we need humane immigration reform," she said, citing a backlog of 800,000 cases that could be ameliorated by adding more immigration judges, making infrastructure improvements at legal points of entry, and "more humane, just, transparent immigration enforcement. That doesn't necessarily mean a wall and more beds and outrageous costs to taxpayers."

Feasley also talked about the root causes underlying the exodus from Latin American countries, primarily from the Northern Triangle countries of El Salvador, Guatemala and Honduras.

"What are we doing as a country to help refugees?" she asked, noting that American policies have historically contributed to instability in those countries. "Are we providing aid for infrastructure and opportunity or is it solely enforcement based?"

The biggest applause of the night came during the question-and-answer period at the end, when an older man from Virginia, bringing the conversation back around to the root causes, asked rhetorically, "If you've gone somewhere and made a big mess, don't you have a responsibility to clean it up?"

Carr, ever quick with a quip, told him that the roar of laughter and applause from the crowd seemed to have answered the question for him.

Hollenbach drew on the religious and moral tradition that the human family is one, with "connections that allow us to see each other as brothers and sisters," he said. And while we have obligations to our immediate family and fellow citizens, borders do not negate the right of all people to live with dignity.

"Borders are significant but they are not absolute, and our responsibilities reach across borders just as they exist internally," he said.

Drawing on the Kew Gardens principles, formulated after the shocking 1964 murder of Kitty Genovese in New York City while neighbors watched but did not intervene, Hollenbach said the United States, in relation to the situation on the southern border, more than meets the requirements of grave need, proximity to the problem, capability to do something, knowledge that no one else is likely to take action and ability to act without placing an undue burden on itself.

Just to prove the point about burden, he cited Lebanon, where roughly one-quarter of its population today is refugees. "If we admitted that number to the United States, we'd go over the top of the number of refugees in the world," he said. "There aren't that many to admit."

To be clear, Hollenbach was not advocating that the U.S. take in the world's population of refugees and asylum, but he and Carey most directly addressed the theological and biblical imperative to welcome the stranger. Here, they found common cause between the Catholic and evangelical response to the border crisis, despite the fact that a majority of white Catholics and white evangelicals support the border wall.

Asked to end on a note of hope, each of the speakers offered some. Pimentel said she sees it every day at Arise, in the faith of the migrants after their arduous journeys. Often the first place they visit is the chapel and the many volunteers who flood the center to lend a hand.

"It's beautiful to see our faith alive," she said. "To welcome the stranger and make a difference in their lives. And that's where the hope is."