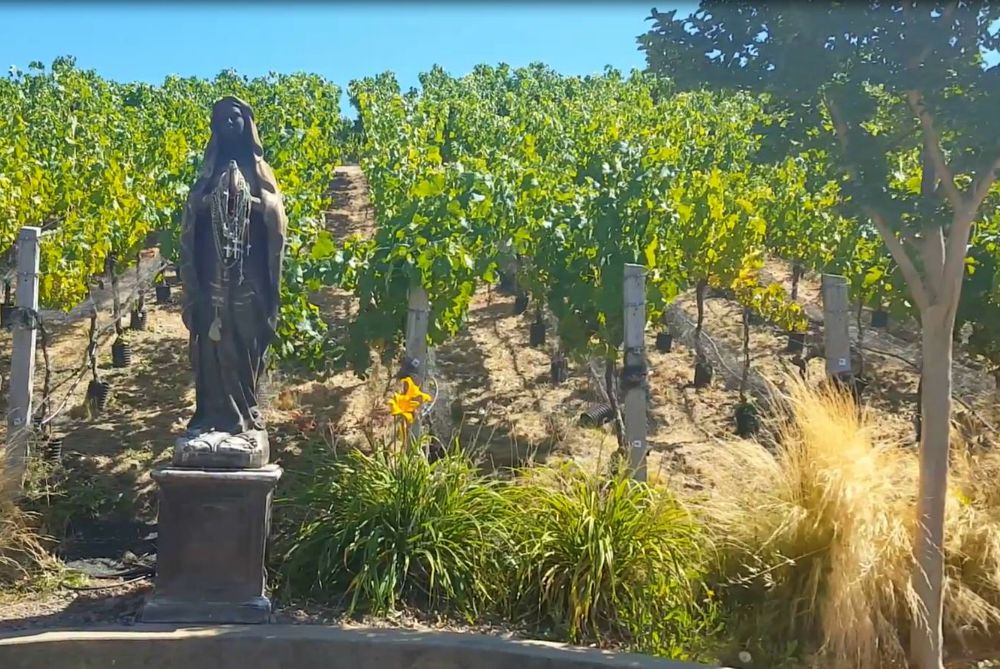 Statue of Mary in the vineyard at Meritage Resort and Spa in Napa, California (NCR photo/Dan Morris-Young)

Both called the nearly 700 participants at the July 24-28 event in Napa, California, to "more thorough, intense Catholic lives" and "missionary discipleship," in Weigel's words.

It was the cardinal's first appearance at a Napa Institute conference, staged at the elegant Meritage Resort and Spa, which is among holdings of institute's co-founder, Tim Busch.

Burke was pointedly critical about the working document for the Vatican's fall Synod of Bishops on the Amazon, which includes discussion of potential priestly ordination of widely respected married men to enhance access to sacraments in that region.

"Celibacy stems from the example of Jesus Christ," said the cardinal. "Our great high priest made this choice" and it provides an example of "perfect continence" for priests.

Weigel agreed. "To relax or remove or dispose of the 1,000 or so years of tradition that lie behind the celibate priesthood is to surrender in a very profound way to the siren song of the sex-saturated culture that is killing itself and its offspring," he said. 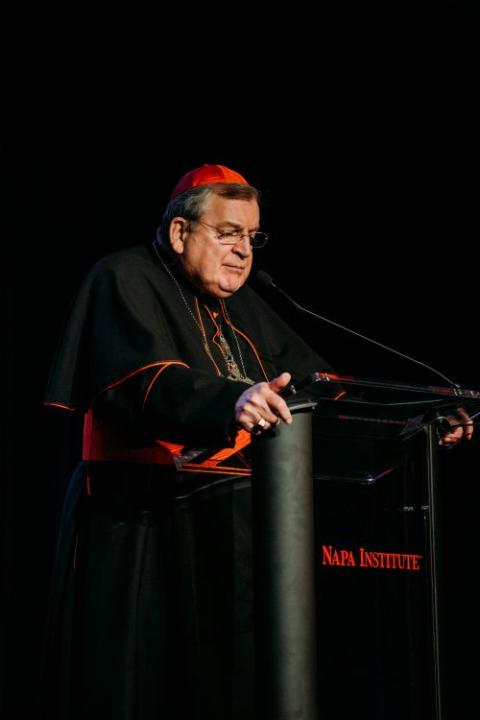 In a July 25 keynote address at the Napa Institute assembly in Napa, California, Cardinal Raymond Burke derided what he called "decades of poor catechesis and preaching … in a thoroughly secularized society." (Courtesy of the Napa Institute)

Titled "Proclaiming the Truths of the Faith in a Time of Crisis," Burke's address centered on a review of a recent 40-point "declaration" signed by him and four other prelates — a retired cardinal from Latvia (Janis Pujats) and three bishops from Kazakhstan (Auxiliary Bishop Athanasius Schneider, Archbishop Tomash Peta and Archbishop Emeritus Jan Pawel Lenga).

Released in June, the eight-page "Declaration of the Truths Relating to Some of the Most Common Errors in the Life of the Church of Our Time" examines "official church teaching on 40 points" about which "there is much error and confusion," charged Burke, who has been outspoken in critiques of Pope Francis' teaching.

Among the 40 "pervasive errors" noted by Burke at Napa were:

• "Confusion" about working to bring Muslims or Jews to Christianity: Many feel both religions "claim their own integrity" and that "it is wrong to work toward their conversion," but "there is salvation through faith in Christ alone," he said to applause.

• Lack of clarity that the church does permit civil authority to exercise capital punishment, a statement that seemed to conflict with Pope Francis' recent description of the death penalty as "a serious violation of the right to life of every person" and the U.S bishops' move to re-cast the U.S catechism on the topic.

• "Serious implications for the entire life of the church" when priests' "divinely appointed" role "acting in the person of Christ" at the consecration at Mass is misunderstood: an error "currently going about is that if no ordained priest" is available, "it is sufficient for the faithful to just designate one of their number to offer the sacrifice," he said.

• Sidelining church doctrine that "the only moral exercise of sex" may take place "within a valid marriage" of a man and woman.

Burke laid proliferation of "errors about fundamental truths of the faith" at the feet of "decades of poor catechesis and preaching … in a thoroughly secularized society."

The cardinal exhorted the audience to "unambiguous moral witness" when encountering "obfuscated and undermined" church teaching and "widespread sin against the faith."

Catholics "in open apostasy is not a not small number," he said, but added that he saw in Napa attendants a "movement" of faithful "who get the picture" and display "wisdom and courage in face of so much confusion and error."

"Such a movement," he said, "will not judge itself according to numbers, but according to the truth. God does not delight in numbers. God delights in truth." His remarks ended in a sustained standing ovation.

Conservative Catholic commentator George Weigel delivered the July 25 opening keynote address, "The Catholic Moment: Where Are We and What Is the Path Forward?" at the 2019 Napa Institute conference in Napa California. (Courtesy of the Napa Institute)

Weigel said a well-lived life centers on the question, "How have I brought others to Christ?"

Advocating "all-in Catholicism," Weigel mocked what he called "Catholic lite" and argued, "We will not attract others to Jesus" unless "manifest in our lives" are "service to the poor and marginalized and the walking wounded in our decadent culture" as well as rigorous sacramental practice.

"We are going to have to be courageous in speaking to friends, neighbors and business associates" about issues including "legal protection of life from birth to natural death," said Weigel.

In that vein, he said pro-life Catholics must do more than debate the abortion issue and should support pregnant women in crisis.

Five protestors — four from the Thomas Merton Center in Palo Alto and one from the Northern California Call to Action chapter — arrived Thursday morning as Weigel and Burke were speaking. The group was escorted off the resort campus by local police called by Meritage security.

Among other things, the five told NCR they wanted to call attention to what they described as the Napa Institute's anti-Francis bias.

In a prepared statement, the Thomas Merton Center claimed the Institute "is allied with prominent, conservative political and religious leaders — some of Pope Francis' most vociferous critics. We see the alliance as antithetical to the Christian teachings of the Beatitudes."

"The Catholic Church is a church for all," it added, "not just those responding to the Napa Institute's self-promotion as the 'preeminent Catholic conference in the United States, bringing together Catholic leaders for faith, fellowship and community, as we explore the theme of This Catholic Moment.' The $2,600 per/person registration fee limits that attendance to the 1% who already wield undue influence in the U.S."

The registration fee does not include accommodations. Significantly reduced prices were available to the ample number of priests, women religious and deacons present.

Burke declined to speak to NCR.

Burke was one of four cardinals to sign an open letter to Francis in 2016 posing five yes-or-no questions they claimed would clarify what they described as doctrinal ambiguity in Amoris Laetitia, Francis' apostolic exhortation on family life.

Removed as head of the church's highest judicial body, the Apostolic Signatura, in 2014 by Francis, Burke has been a prominent detractor of the pope, including Francis' approach to marriage and family life and his reforms of annulment procedures.

Francis reappointed Burke as a rank-and-file member of the Signatura in 2017.

YouTube video: The Napa Institute conference July 24-28, 2019, was staged at the elegant Meritage Resort and Spa in Napa, California. Here is what guests saw.