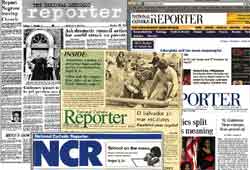 “The core function of religious journalism, as of all journalism, is to find out what is going on and report it.”

Over the years, the National Catholic Reporter has published some innovative (some would say radical) notions, but none more so than that quoted above.

The idea, as NCR’s founding editors spelled out 45 years ago this month, that Catholic journalists could press church leaders “for as much information as can be had about events and their meaning,” which would require “the putting of awkward questions and the printing of awkward facts,” was unique.

There simply was no tradition, no expectation that Catholic journalists in the United States would hold church officials accountable in the manner that a good reporter assigned to city hall would do with a local mayor. “There is nothing basically wrong with the Catholic press that an acute paper shortage would not cure,” Chicago Catholic journalist Dan Herr quipped in 1961, three years prior to NCR’s first issue.

NCR was, from the get-go, an audacious undertaking.

Much has changed in the church and world over the past four-and-a-half decades, but at NCR, one thing is constant: We aim “to find out what is going on and report it.”

Nowhere else will a concerned Catholic find such coverage. Facing acute economic difficulties, the nation’s daily newspapers are abandoning serious coverage of religion. “There have been reductions in the number of reporters who write about religion full-time at all of the nation’s biggest newspapers, and the religion news beat has disappeared from multiple midsize and smaller papers,” The Boston Globe’s Michael Paulson wrote recently. “The surviving newspaper religion sections are getting smaller.”

NCR, as you may have noticed, is getting larger, not smaller. In our opinion pages this week, Benedictine Sr. Joan Chittister, a longtime NCR columnist, comments on the potentially unintended consequences of stifling speech; Fr. Richard McBrien examines efforts to “reform the reform” of church liturgy; veteran Catholic journalist Heidi Schlumpf points readers to Catholic blogs that offer more light than heat. Not least, in a penetrating and important essay, Immaculate Heart of Mary Sr. Sandra Schneiders separates the essential from the incidental in women religious communities of the 21st century.

Meanwhile, our Fall Books supplement offers much to consider, including reviews that cover the landscape related to the fastest growing segment of the U.S. church: Latinos and Latinas.

Our founders put it this way: “A newspaper dedicated to reporting and free to do the job still has to decide what is significant, relevant, vital and therefore worth reporting. Since we like being in the kitchen, we’ll take the heat.” Indeed, we will.

Some things about NCR have changed, not least the information needs of our readers. The wide-open, wide-ranging conversations generated by the “spirit of Vatican II” still exist, to be sure, but there are many topics openly discussed not too many years ago that are now considered verboten in official church circles. Not in NCR.

Again, NCR’s founders put it well 45 years ago: “Our orientation ... is toward reporting the news, toward enterprise and relevance, toward dialogue with practically everybody. We are a religious paper with worldly interests. We are committed to the church, and secure enough in our commitment to keep wondering what the church is and will become.”

NCR is as vital today as ever because the generation of post-Vatican II U.S. Catholics -- the largest, most highly educated, affluent and influential group of coreligionists the world has ever seen -- is now taking a leadership role in the church. Meanwhile, they are also bringing their religious values into their professional and personal lives -- as leaders of universities and businesses, government officials, in the arts and the professions, as parents and community members -- in a manner their immigrant grandparents and great-grandparents could only marvel at.

This is the new Catholic moment for the church in the United States.

These post-Vatican II lay leaders demand more than their ancestors. As Americans, they are used to operating in professional environments that demand accountability. The companies and nonprofits they manage operate with a high degree of transparency. And they expect that when they offer their time, talent and treasure to the parish, or to the church-sponsored nonprofit, or to their bishop, that basic standards of accountability and transparency be present.

This is not an ideological notion, where “progressive” Catholics can be easily distinguished from their “conservative” counterparts. The post-Vatican II American Catholic -- whatever his or her political or theological inclinations -- increasingly sees no reason why the church should operate on a wholly different plane than every other significant institution in our society.

It is our job at NCR to help provide this new generation of Catholic lay leaders with the tools, the vocabulary -- the news, analysis and commentary -- they need to function successfully in an institution that resists openness, that too often seeks opaqueness rather than sunlight.

The business of NCR

As publisher of NCR, it’s my job to ensure the numbers add up, that this “brave little paper” (as The New York Times once described NCR) has a future as vital as its past.

To that end, NCR has embarked on a significant (and expensive) effort to reach out directly to self-identified lay leaders in parishes and other church institutions. We are putting the paper directly in the hands of post-Vatican II lay leaders. Many are seeing it for the first time. The reaction, in terms of response rates to our marketing campaigns, has been most heartening.

Meanwhile, we have embraced the Internet. Last month, the NCR Web site (NCRonline.org) racked up nearly 1 million page views, about double the number from the same time last year. NCR has a strong Facebook and Twitter presence. The reason for the increased Web traffic is clear: On a daily basis, NCR is providing information -- reporting, analysis and commentary -- that Catholics who care about their church need to read.

Paying for all this is, of course, a challenge.

Newspapers have traditionally relied on two revenue streams to fund their operations: subscription revenue and advertising dollars. The “Great Recession” of the past year reduced the latter by as much as 50 percent at some papers and we took a hit at NCR, where advertising revenue declined by about 20 percent last fiscal year. (That trend, thankfully, has eased somewhat and seems to be returning to a more normal pattern.)

Earlier this year, Sen. Ben Cardin, D-Md., introduced legislation that would allow the nation’s economically beleaguered big daily papers to tap another revenue source. Under Cardin’s bill, these papers could become nonprofits and thus seek charitable support from local civic leaders and those who value journalism in their communities.

It is an interesting idea. One, in fact, that NCR has been implementing for more than four decades. From its inception, NCR, in addition to subscription revenue and advertising dollars, has relied on the financial support of Catholics who value the independent news, analysis and commentary we provide. We would not exist without it.

In addition to celebrating our 45th birthday this month, October is the time we launch our “Friends of NCR” campaign. If you value what we do, please consider supporting NCR. (Checks, made out to the National Catholic Reporter, can be mailed to National Catholic Reporter, Attn: Fund Development, 115. E Armour Blvd., Kansas City, MO 64111, or contributions can be made online at the NCR Web site, NCRonline.org/donate.)

Over the next few weeks, meanwhile, all NCR subscribers will receive information on how to give NCR as a Christmas gift to someone you know would benefit from a subscription. I urge you, as we reach out to the next generation of Catholic lay leaders, to consider making NCR a gift to a friend or family member.

And, not least, in order to further increase our coverage, to expand our outreach to post-Vatican II Catholics, and to continue to build our presence on the Web, NCR is embarked on a three-year $3.5 million capital campaign. Less than a year into that effort, we are nearly one-third of the way to achieving our goal. Please contact me at jfeuerherd@ncronline.org (please put “capital campaign” in the subject line) if you would like more information on this effort.

“We think this kind of work can be a vocation,” NCR’s editors said 45 years ago. “One reason it may be our vocation is that we like doing it and think it makes a difference in the world.”

I know that NCR makes a difference. After all, without it, who would find out what is going on in our church and report it?

Joe Feuerherd is NCR publisher. His e-mail address is jfeuerherd@ncronline.org.