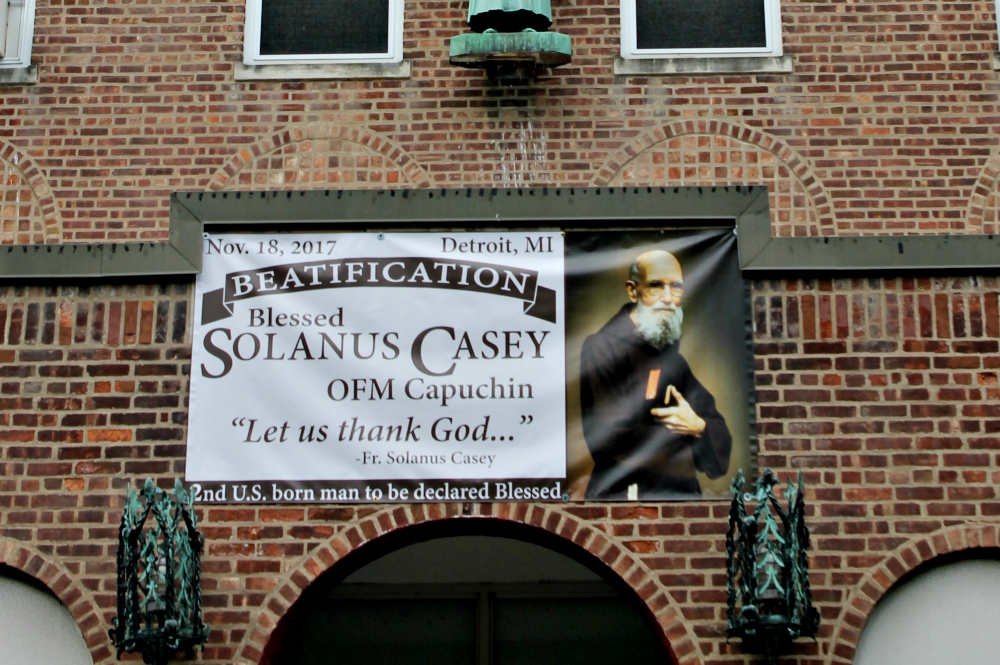 What do U2, Beyoncé and Capuchin Fr. Solanus Casey have in common? They have all sold out Ford Field Stadium. On Nov. 18, Solanus will be beatified. More than 60,000 people in Detroit will celebrate as Solanus takes the next step to becoming an American saint. Here's some short biographical notes on Solanus.

1. He was the son of immigrants.

Solanus' parents Bernard and Ellen (née Murphy) Casey independently moved to the U.S. in the 1850s in the aftermath of the famine in Ireland. They met in Maine, married in Massachusetts, and eventually settled in Wisconsin after Abraham Lincoln signed the Homestead Act of 1862, which encouraged westward migration by offering millions of acres of farmable land. Solanus was the sixth of 16 children, 10 boys and six girls. Two of his brothers also became priests.

2. He was a Capuchin Franciscan friar.

Although he began his vocational journey in a diocesan seminary in Milwaukee,* he struggled academically. He was encouraged by the seminary's rector to continue his vocation and serve the poor with the Capuchins. Born Bernard "Barney" Casey, he took his religious name from St. Francis Solanus (1549-1610) a Spanish Franciscan missionary to Latin American, who like Solanus Casey also played the violin.

3.  He was a "simplex priest," a category that no longer exists.

Solanus was ordained in 1904, but due to his lack of academic success, he was not granted faculties to preach doctrinal sermons or hear confessions. Solanus was actually very intelligent, but he had difficulties in studies because the classes were taught in German and Latin, languages that were not spoken in the Casey household. However, his life was a sermon on Christian virtue, and he informally heard thousands of confessions from the people who sought his counsel.

He ministered in Detroit (St. Bonaventure Monastery); Yonkers, New York (Sacred Heart); and New York City (St. John the Baptist, Our Lady of Sorrows, Queen of Angels). Like other Capuchin saints (Conrad of Parzham and Seraphin of Montegranaro), Solanus was a porter or doorman for the friary. This gave Solanus endless contact with the poor during the Great Depression. In addition to offering people soup and bread, he counseled people with spiritual, emotional or physical struggles. At the behest of his superior, Solanus kept a record of healings and miraculous occurrences through the Seraphic Mass Association enrollments, which filled up several notebooks. He was a fine example of a shepherd who had "the smell of their sheep."

5. Gratitude was his hallmark.

Like the first canonized Capuchin, Felix of Cantalice, known as "Br. Deo Gratias," thanksgiving was Solanus' constant refrain. Solanus viewed gratitude to God as the path to sanctity. He viewed ingratitude as closing the door to reason, peace, and charity. Quotes from his letters and correspondence include:

"Gratitude is the first sign of a thinking, rational creature."

"Gratitude is one of the surest indications of intelligence, and atheism is the blackest ingratitude possible."

"If the enemy of our soul is pleased at anything in us, it is ingratitude of any kind. Why? Ingratitude leads to so many breaks with God and our neighbor."

"Thank God ahead of time," which he often advised to people he counseled.

*Correction: An earlier version of this article misidentified the seminary where Casey began the journey to his vocation. He enrolled at St. Francis High School Seminary near Milwaukee in 1891, and because of academic limitations, the faculty there advised him to consider joining a religious order. The Milwaukee priest who pointed out our mistake added: "We would have been blessed to have [Casey] in our presbyterate, as we have been gifted with so many wonderful Capuchins who have served in our archdiocese - -but God had other plans. 'Blessed be God in all his designs!' "