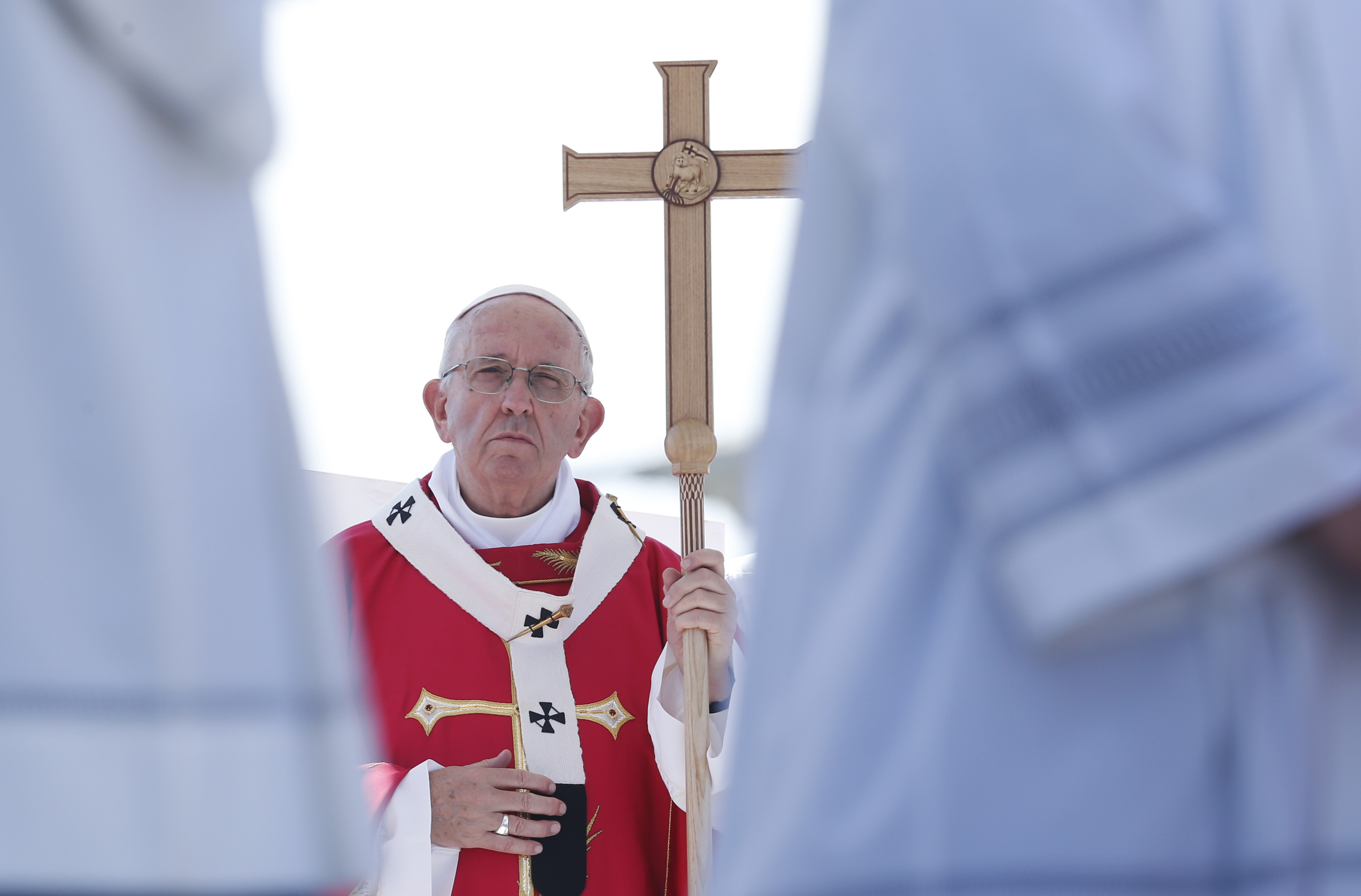 Pope Francis holds his pastoral staff as he celebrates Mass on the waterfront in Palermo, Sicily, Sept. 15. (CNS photo/Paul Haring)

Could this be the moment for which Cardinal Jorge Bergoglio was called from "the ends of the earth" to be pope?

Let's not forget how when Bergoglio was introduced to us as Pope Francis — the name of not a previous pope or apostle, but of a reforming saint — he captured the world's imagination with his humble request for all those gathered in St. Peter's Square to pray for him, and he bowed before them.

Let's not forget that he was elected by a conclave of cardinals who knew they wanted a freshness brought to the papacy and reform to the church. That was his mandate.

He first led by example: renouncing the papal apartments, taking a room in Casa Santa Marta and eating meals in the cafeteria. He forsook titles and called himself the bishop of Rome. He rides in simple cars, not bulletproof limousines.

Let's not forget how from his earliest days as pope he spoke for a ministry of mercy and denounced in the most strident terms the disease of clericalism. In November 2013, speaking to a gathering of religious superiors, he called clericalism "one of the worst evils," and warned the religious leaders with seminarians, "We must form their hearts. Otherwise, we are creating little monsters. And then these little monsters mold the people of God. This really gives me goose bumps."

At about this same time, Francis released what has become known as the "manifesto" for his papacy, the apostolic exhortation Evangelii Gaudium ("The Joy of the Gospel"), which is a call for institutional conversion based on the reforms of the Second Vatican Council. A key passage:

Paul VI invited us to deepen the call to renewal and to make it clear that renewal does not only concern individuals but the entire Church. Let us return to a memorable text which continues to challenge us. "The Church must look with penetrating eyes within herself, ponder the mystery of her own being … This vivid and lively self-awareness inevitably leads to a comparison between the ideal image of the Church as Christ envisaged her and loved her as his holy and spotless bride, and the actual image which the Church presents to the world today … This is the source of the Church's heroic and impatient struggle for renewal: the struggle to correct those flaws introduced by her members which her own self-examination, mirroring her exemplar, Christ, points out to her and condemns." The Second Vatican Council presented ecclesial conversion as openness to a constant self-renewal born of fidelity to Jesus Christ: "Every renewal of the Church essentially consists in an increase of fidelity to her own calling … Christ summons the Church as she goes her pilgrim way … to that continual reformation of which she always has need, in so far as she is a human institution here on earth."

We have in these pages criticized Francis for his handling of clergy sex abuse. He has at times been blinded by his own clericalism. Yet, he has proven over the course of the last six months that he can learn from these mistakes and take correct action.

Let's also remember that Francis has a deep belief in the need for the church to act as a body. He has worked to renew the Synod of Bishops as a real working group. He has strengthened the positions of national bishops' conferences. He knows that he cannot act alone and that he cannot impose corrections and reforms from on high.

For this reason, I welcome his calling to Rome the presidents of the world's national conferences of bishops to meet with him at the Vatican in February. It is certainly a bold step and the meeting will force the bishops to take action on sex abuse — unless they choose to ignore it.

Such a meeting is not without risks. It could be a complete waste of time and resources. We have seen forces arrayed against this papacy that want to see Francis humiliated and they will be working overtime to thwart the good that could come from this meeting.

Either way, this February meeting will likely define the Francis papacy.

A version of this essay appeared in the Sept 21–Oct 4, 2018 print issue under the headline: A defining moment.