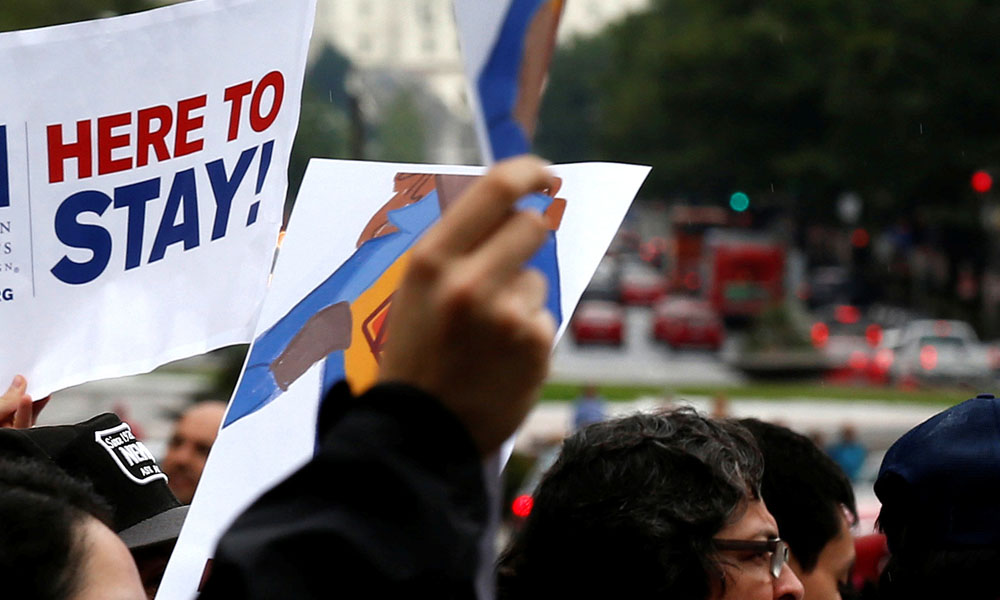 SOUTH BEND, IND. — As part of its 175th anniversary celebration, the University of Notre Dame organized a pilgrimage from Vincennes, Indiana, to the university campus in South Bend, recreating the 1842 journey of Holy Cross Fr. Edward Sorin and seven Congregation of the Holy Cross Brothers to found the university.

According to a website devoted to the Notre Dame Trail, the purpose of the pilgrimage was "to rededicate ourselves to Notre Dame’s mission to seek God, study the world, and serve humanity — to forge our own trails through the next frontiers of knowledge and innovation, to boldly lead the way into the new chapters of our story."

A core group of 32 pilgrims completed the entire 13-day trip, traveling more than 300 miles on foot and by bike. Their numbers swelled from about 130 on Aug. 22, to around 300 on Aug. 24, and to thousands for the final 3-mile walk from South Bend to the Notre Dame campus.

Along the way, pilgrims stopped for Mass, meals and various activities such as dinner theatre at the Red Skelton Museum, a visit to the Terre Haute Brewing Company and screenings of the movies "Hoosiers" and "Rudy."

Members of the group also spent time praying, especially for the intentions they invited others to send. To symbolize the prayer intentions, pilgrims carried small stones, which they placed in the new rock bed near Notre Dame's Log Chapel "as a physical sign of their intentions, their prayers, and their commitment to their faith."

On the final day, the group gathered for a blessing and remarks in Howard Park, visited the campuses of Holy Cross College and St. Mary's College, and stopped by the Log Chapel and the graves of Sorin and several of the original brothers. The pilgrimage concluded on campus with the 175th anniversary mass and picnic.

Speaking of Notre Dame*, Holy Cross Fr. Donald McNeill, the founding director of the university's Center for Social Concerns, died at age 81 Aug. 24 at Holy Cross House. Devoted to helping his students enact Catholic social teaching through experiential learning, McNeill taught theology at Notre Dame for three decades, and founded the Center for Social Concern in 1983. The Center is dedicated to engaged learning, research, and service and involves more than 2,500 students each year. Read more about McNeill in this appreciation.

Kubly and her husband Michael gave the gift in memory of their son, Charlie, who suffered from depression and took his own life at age 28.

“This generous gift from Billie Kubly will allow our Counseling Center to better serve the complex mental health needs of today’s college students through group outreach and educational programming, along with enhanced walk-in services and crisis response,” said Sarah Olejniczak, dean for student affairs, in the press release.

The Kublys have been recognized for their work with the Kubly Foundation to increase access to mental health resources in Wisconsin.

LOUISVILLE, KY. — Bellarmine University in Louisville, Kentucky, announced in a press release Aug. 30 that it had completed its capital campaign, raising over $100 million.

The money was raised from over 44,000 gifts, ranging from $1 to $5 million. It was guided by a plan called Vision 2020, developed by former president Joseph McGowan, which aimed to position Bellarmine as the "premier independent Catholic university in the South," the press release said.

Bellarmine credits the new academic initiatives already funded by the campaign, such as 49 endowed scholarships, four new learning communities, international study opportunities and programs for first generation college students with fueling "a 46 percent increase in the student body since 2005," while still maintaining a 12-to-one student-to-faculty ratio.

Capital campaign funds also allowed Bellarmine to construct or heavily renovate 11 buildings, and to add $15 million to the university's annual fund, which provides scholarships and other student aid, according to the release.

WASHINGTON — Patricia McGuire, president of Trinity Washington University, headed a list of over 1,300 Catholic educators who wrote a letter urging the Trump administration to defend the Deferred Action for Childhood Arrivals program. DACA offers work authorization and temporary protection from deportation to undocumented immigrants who were brought to the U.S. as children.

The letter, released Aug. 28 and addressed to White House Chief of Staff General John Kelly, said: "We stand with our students who are DACA beneficiaries. Their perseverance, hard work and hopefulness is an example to us as teachers. We witness the obstacles they overcome each day as they pursue their dream of a better life for themselves and their families. In facing adversity and uncertainty with grace and hope, they embody the best of our schools, our country and the Catholic tradition.

"It is a moral and policy failure when our government targets children and young adults who simply aspire to live the American dream. Breaking up families and communities undermines the best values of our nation."

McGuire also wrote a statement on DACA recipients, also known as "Dreamers," at Trinity. She said that the more than 100 "Dreamers" who attend Trinity are "among our most accomplished students."

"Stripping these young people of the right to work, to support their families, to go to school, to drive, to live openly without fear will bring grievous harm to Dreamers and their families who depend on them, solving not a single problem this nation faces but demonstrating a level of cruelty and insensitivity to human need that would be an appalling for any nation, let alone the United States that historically has been a beacon of hope for oppressed peoples," McGuire wrote. "We must stand for justice and support the right to lives of dignity and purpose for Dreamers and all immigrants."

Click here for more about threats to the DACA program and the Catholic response.

LACEY, WASH. — Saint Martin's University in Lacey, Washington, announced in an Aug. 28 press release that it has opened its full-tuition Abbot Scholarships to graduates of any Catholic high school within the U.S. or its territories. The scholarship, named in honor of the Benedictine school's first abbot and chancellor, Abbot Oswald Baran, and its current abbot and chancellor, Abbot Neal Roth, both Benedictines, is awarded to students who have financial need and have demonstrated one or more of Saint Martin's core values: faith, reason, service and community.

Recipients of the scholarship live on campus and serve as leaders within the community, working with the admissions, career development and campus ministry departments and with faculty members of their choosing.

Formerly the Abbot Scholarships were only available to graduates of Catholic high schools within Washington.

“The Abbot Scholarships are a great way for us to honor our mission and identity as a Catholic Benedictine university. The inclusion of other Catholic high schools from outside of our local region reflects our growing national reputation,” said Saint Martin’s University President Roy Heynderickx in the press release.

The symposium will include paper presentations from faculty, staff and graduate students; keynote speakers; and a joint reflection on the past five decades of Catholic higher education and future trajectories by Saint Louis University President Fred Pestello and Holy Cross Fr. John Jenkins, the president of Notre Dame.

The symposium's call for papers calls the Land O'Lakes statement "a watershed moment in contemporary American Catholic history" that has "not gone uncontested. Some consider it a revolutionary roadmap for Catholic education in the modern world; others have declared a half-century of devastation."

One of the more controversial statements in the Land O'Lakes document is its assertion that "the Catholic university must have a true autonomy and academic freedom in the face of authority of whatever kind, lay or clerical, external to the academic community itself."

*This story has been updated to include an entry about Holy Cross Fr. Don McNeill.