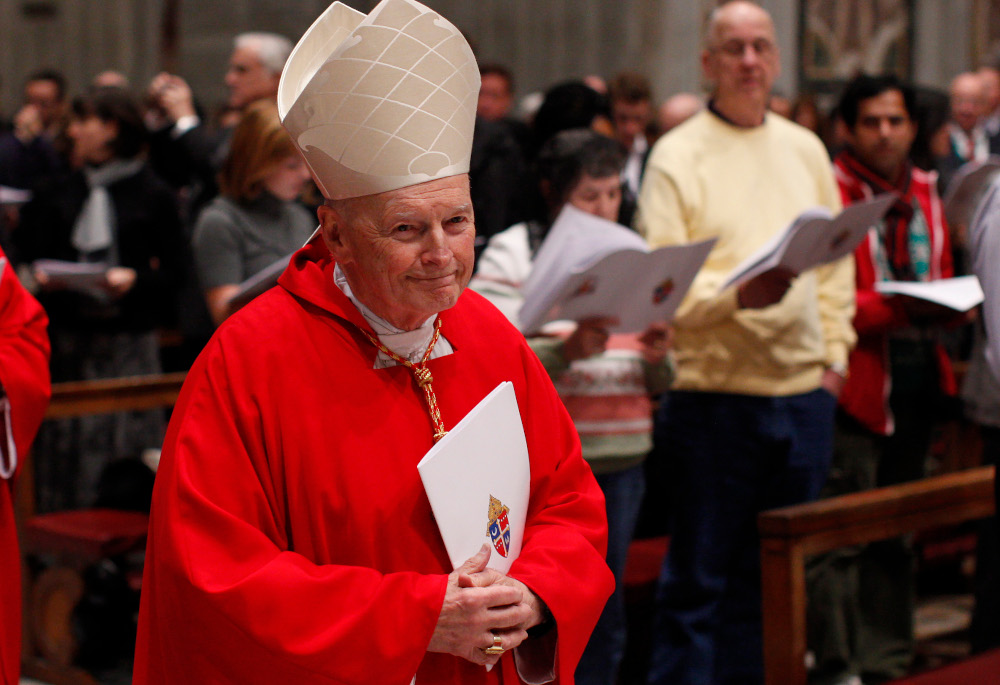 Then-Cardinal Theodore E. McCarrick, retired archbishop of Washington, arrives in procession for a Mass of thanksgiving for Cardinal Donald W. Wuerl of Washington in St. Peter's Basilica at the Vatican Nov. 22, 2010. A new lawsuit against McCarrick, who was laicized in 2019, accuses him of managing a sex ring among seminarians, altar boys and priests at a New Jersey beach house. (CNS/Paul Haring)

A firm that has filed previous legal complaints against former Cardinal Theodore E. McCarrick and church entities added another complainant July 21 against the defrocked prelate, leveling a new accusation that he allegedly abused its new client as a boy at a beach house in Sea Girt, New Jersey, in the early 1980s.

In a July 22 news conference via Zoom, Jeff Anderson of Jeff Anderson & Associates of St. Paul, Minnesota, announced a new lawsuit he said was filed in Middlesex County Superior Court in New Jersey. He said his client, named only as John Doe 14, was groomed by a priest and "procured" for McCarrick when he was bishop of the Diocese of Metuchen, New Jersey.

Anderson said the new complaint identifies at least seven children who were "groomed by others for McCarrick," and in addition to McCarrick it names several Catholic entities as defendants including the Diocese of Metuchen, the Archdiocese of Newark, New Jersey, and Essex Catholic Boys High School, which closed in 2003.

The suit alleges that at age 11, the boy began to be sexually abused in 1978 by a priest at a New Jersey parish and the abuse continued at the hands of another cleric at the Catholic high school he attended, and then with McCarrick in 1982, when the boy was urged to talk to the prelate because his family was having a difficult time affording tuition.

The complaint says the client was not the only boy suffering such abuse on the premises. In the news conference, Anderson said John Doe 14 was just one of a group called "the crew" who would go on overnight stays to a beach house paid for by diocesan funds. There the boys were instructed where to sleep "and in the night, with the assistance of others, McCarrick would creep into this kid's bed and engage in criminal sexual assault of him, whispering, 'It is OK.'"

"I would like to thank Doe 14," Anderson said of his unnamed client. "Before he came to us, he was suffering in silence, secrecy and shame for what Cardinal McCarrick did to him."

"While we have not yet received the complaint, our prayers are with all survivors of abuse, today and always, and we stand with them in their journey toward healing and hope," said Anthony P. Kearns III, spokesperson and chancellor for the Diocese of Metuchen in a July 22 statement.

"With God's grace, all survivors of abuse, particularly those wounded by members of the church, will continue to heal and move forward," Kearns said. "Our diocese renews our commitment to prevent these types of abuse from ever happening again."

The diocese also encouraged anyone harmed by clergy in New Jersey to notify law enforcement.

The Archdiocese of Newark in a statement July 22 said it would not discuss or comment on matters in litigation.

"The Archdiocese of Newark remains fully committed to transparency and to our long-standing programs to protect the faithful and will continue to work with victims, their legal representatives and law enforcement authorities in an ongoing effort to resolve allegations and bring closure to victims," it said.

Anderson's firm also continued to call on the Vatican and other church entities to "come clean" about what others knew about the alleged abuses leading all the way back to St. John Paul II, who created McCarrick as a cardinal.

"Doe 14's complaint exposes ongoing system of papal permission for the unbridled abuse of power by McCarrick and others," Anderson said.

On May 15 the postulator for the sainthood cause of Pope John Paul said he and the commission involved in investigating the life of the late pope for sainthood found no evidence the pope knowingly neglected or covered up abuse scandals.

Last November, when the U.S. bishops met for their annual fall meeting in Baltimore, Boston's Cardinal Sean P. O'Malley gave the U.S. prelates a brief update about the status of a report that may reveal what the Vatican knew about the ascent to power of now-disgraced former U.S. cardinal. He said that it was taking longer than previously believed because it involved various dioceses and that perhaps it would be made public by Christmas, or the New Year, but that has not happened .

McCarrick was dismissed by the Vatican from the clerical state in February 2019 following an investigation of accusations that he had abused children early on in his career of more than 60 years as a cleric, and that he also had abused seminarians as a bishop.

He had long been one of the premier U.S. bishops, traveling the world on behalf of the church as an esteemed member of the U.S. Conference of Catholic Bishops, leaving many wondering how he could have ascended in church ranks when many are said to have been aware of his alleged abuses.

"We made it clear to Cardinal (Pietro) Parolin at the leadership of the curia that the priests and the people of our country are anxious to receive the Holy See's explanation of this tragic situation, how he could become an archbishop and cardinal, who knew what and when," O'Malley said of meeting with the Vatican secretary of state in early November.

"The long wait has resulted in great frustration on the part of bishops and our people and indeed a very harsh and even cynical interpretation of the seeming silence," the cardinal said.